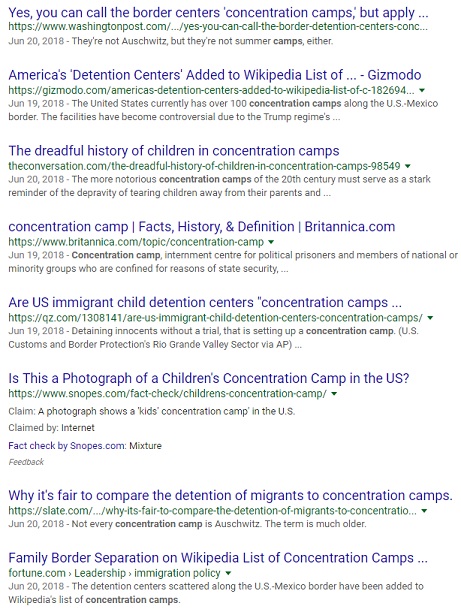 The image below is a screen shot of a search from Friday morning, key words “Concentration Camp,” using the time range searchfeature from May 1 to June 28, where we see just from the front page that outlets like Washington Post, Snopes, Fortune, Gizmodo, Slate and others all used the term in their headlines on June 19 & June 20, 2018, amidst the ongoing immigration debate.

It continues on subsequent pages with Vice, Motherboard, Newsweek and others using the same terminology in their headlines on the same days.

It has now been revealed that another  “listserv,” hosted on Google Groups, exists, and has over 400 members, described as “left-of-center journalists, authors, academics, and wonks,” which provides them what is dubbed as an “off-the-record discussion forum.”

Via Jezebel, who has seen this list and messages from it: These members include New York Times best-selling authors, Ivy League academics, magazine editors, and other public intellectuals—in short, a lot of important people who influence public discourse through their written work.”

While many writers get their names added to these types of groups constantly without our knowledge or permission until the emails start showing up, a “listserv” in an of itself is nothing scandalous, but if that group of journalists and media personalities actively collude to share a narrative, to push specific keywords in order to influence their audience collectively, that is indeed collusion.

While Jezebel only revealed one name on the list, New York Magazine journalist Jesse Singal, and only provided the specific messages relating to his work, we have no idea how many names from top liberal media outlets are part of the membership. Also according to Jezebel, they have seen messages from this list that date back to 2010.

What we do have is history……. the original “JournoList” scandal.

Lets take a walk down memory lane, back to 2009-2010, when another “listserv,” dubbed “JournoList, sometimes called the J-List, of liberal journalists was exposed, bringing about a massive scandal when over 150 members names were leaked, from very prominent outlets, along with a significant portion of their messages. Those messages showed how they colluded on killing off stories that reflected badly on Barack Obama, labeling Tea Party members as Nazis and racists, even going as far as to “discuss” disgusting rumors regarding Sarah Palin’s child who has Downs Syndrome and whether or not to write about a rumor claiming her baby was actually her daughter’s child.

They eventually decided not to touch that one, but the nature of their collusion, once made public, resulted in the founder of the group, Vox’s Ezra Klein, dismantling the group in June of 2010, the same year this new listserv was created.

While not all the names on that list were exposed, it was generally reported that there were also over 400 members that were part of that group, much like this new group that just happened to start the same year Klein’s ended. We also know that the Jesse Singal was part of the previous JournoList group.

Other than Singal, the now-defunct (or did they just rename the group and secretively continue?) JournoList group, included namesfrom Washington Post, Politico, The Hill, The New Republic, Newsweek, TIME, The Atlantic, Huffington Post, Baltimore Sun, the Economist, Bloomberg, Daily Beast, Slate, American Prospect, Reuters, Associated Press just to name a few….. with multiple members from many of those outlets all being members.

2010 Flashback, after more messages and names were revealed:

Now the diaper is coming off entirely. Perhaps stretching the diaper metaphor too far, what’s inside JournoList may stink, but it’s no surprise that it does. JournoList e-mails obtained by the Daily Caller reveal what anybody with two neurons to rub together already knew: Professional liberals don’t like Republicans and do like Democrats. They can be awfully smug and condescending in their sense of intellectual and moral superiority. They tend to ascribe evil motives to their political opponents – sometimes even when they know it’s unfair. One obscure blogger insisted that liberals should arbitrarily demonize a conservative journalist as a racist to scare conservatives away from covering stories that might hurt Obama.

Oh, and – surprise! – it turns out that the “O” in JournoList stands for “Obama.”

In 2008, participants shared talking points about how to shape coverage to help Obama. They tried to paint any negative coverage of Obama’s racist and hateful pastor, Jeremiah Wright, as out of bounds. Journalists at such “objective” news organizations as Newsweek, Bloomberg, Time, and The Economist joined conversations with open partisans about the best way to criticize Sarah Palin.

Like an Amish community raising a barn, members of the progressive community got together to hammer out talking points. Amidst a discussion of Palin, Chris Hayes, a writer for The Nation, wrote: “Keep the ideas coming! Have to go on TV to talk about this in a few min and need all the help I can get.” Time’s Joe Klein admitted to his fellow JournoListers that he’d collected the listserv’s bric-a-brac and fashioned it into a brickbat aimed at Palin.

It is also noteworthy that among media members, there were also “a number of professional political operatives, including top White House economic advisors, key Obama political appointees, and Democratic campaign veterans,” that were part of the original JournoList, to help “shape” the news.

Via Daily Caller, who exposed the original JournoList groups and their collusion, describing one of the messages to the group from Jeff Hauser, a professional political operative, who was preemptively plotting how members should spin an upcoming debate between John McCain and Barack Obama:

The single biggest thing JournoList can do is to lay the analytical framework within the media elite necessary for an actual Obama debate win to be viewed as such by a sufficient proportion of media elites that voters know it was a win.

Of course, this only works if Obama does as we expect (and McCain is a terrible debater, btw).

But even Gore’s uneven Debate 1 performance in 2000 was deemed a win initially by a viewership that was demographically to the right of the electorate (lower minority viewership in 2000 of debates, more male, more GOP, etc…)… but Bush was winning on several media narratives and thus got the benefit from the intense 72 hours of post-debate coverage.

JournoList’s greatest challenge is to make sure an actual win by Obama translates into winning the battle for political impact.

It wasn’t until the existence of the JournoList listserv was exposed, then the Daily Caller started revealing the content of the messages, that any research could be done as how the narrative went from a “discussion,” among the groups members straight to the headlines and content of the publications who had employees on the list.

For example, the group “discussed” whether tea party members parallel Nazis, and a narrative was born. They “discussed” how to kill the Jeremiah Wright narrative after his anti-white racist rants went viral, along with the knowledge that he had been Obama’s mentor and “father-figure” for decades, by suggesting they change the narrative to label those reporting the issue as “racists.”

In a key episode, JournoList members openly plotted to bury attention on then-candidate Barack Obama’s controversial pastor, the Rev. Jeremiah Wright. The Washington Independent’s Spencer Ackerman, for instance, suggested an effective tactic to distract from the issue would be to pick one of Obama’s critics, “Fred Barnes, Karl Rove, who cares — and call them racists.”

Sure enough, almost any conservative can tell you that any criticism of Obama was often met with cries of “racist!.”

Is it a coincidence that many of the same original members of the JournoList 1.0, are the ones screaming now that President Trump is a racist? They apparently liked that narrtive and have been running with it ever since their “discussion,” back in 2009.

Another interesting part of their “discussions” has become a popular talking point by liberal media and Democratic politicians. 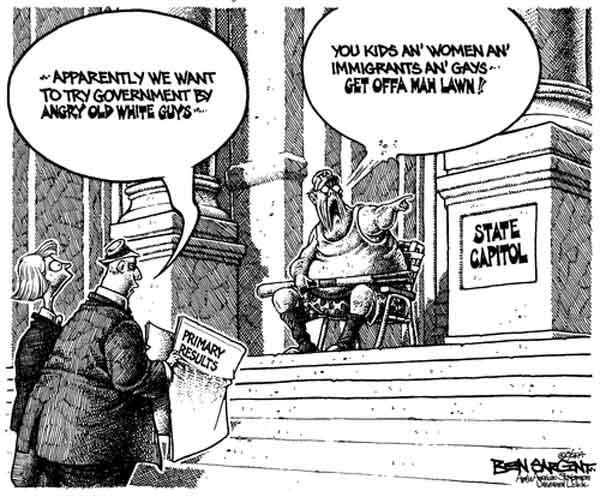 In some of the leaked original JournoList emails, (Page 83 of PDF) we see the reference to another specific set of terms used to describe the Republican party, phrases like “bunch of white guys,” and “straight white males.”

CNN in May of 2017, in a piece titled “What’s wrong with too many white men in one place?,” we see statements like “”These are not a bunch of bumbling old white guys who don’t know better,” says Coonfield. “They know exactly what they’re doing. It’s a certain staging of power. An image of a bunch of white guys seeking to undo health care coverage for millions of Americans sends a strong unambiguous message about whose interests are being represented and whose are not.”