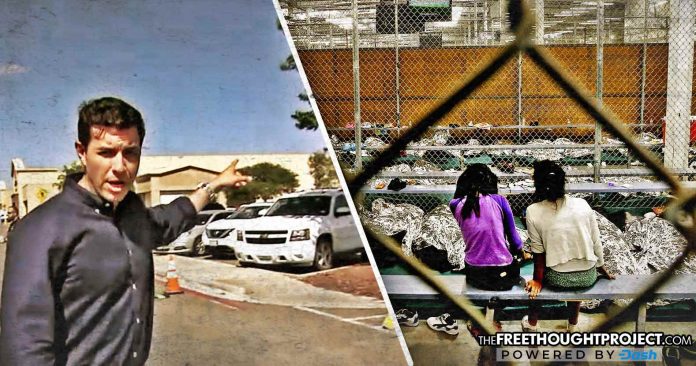 The mainstream media is now admitting that the Walmart stores they claimed closed over “plumbing problems” have since been converted into detention centers.

When citizens began to ask questions about why Walmart stores were suddenly closing in in southern states in 2015, the mainstream media insisted that the closures were due to plumbing problems and that any suggestion of government involvement was a crazy conspiracy theory. Three years later, the MSM is finally admitting that several of those Walmart stores were converted into detention centers, which now house immigrant children who have been separated from their parents.

At least 1,500 boys are currently being detained in Brownsville, Texas, where NBC News reported that they “spend 22 hours per day during the week (21 hours on weekends) locked inside a converted former Walmart,” where at least five boys are packed into rooms built for four. Many of those in prisons across the United States get more yard time than these children.

The boys range in age from 10 to 17 years old, and the average stay at the center is around 52 days. If the idea of imprisoning young boys as if they are felons for two months’ straight sounds agonizing and cruel, that is because it is. A small group of reporters was allowed inside the facility, and the report from NBC claimed that guard asked them to “smile at the hundreds of detained migrant kids in line for a meal because ‘they feel like animals in a cage being looked at.’”

A report from ABC News also noted that the detention center in Brownsville “was once a Walmart,” and while it claimed that the facility was “clean and well-staffed, with activities to keep the kids busy and their minds off their unfortunate situation,” it also noted that this was “a media tour, and journalists weren’t allowed to interview any of the children.”

“Where there were once racks of clothes and aisles of appliances, there were now spotless dorm-style bedrooms with neatly made beds and Pokémon posters on the walls,” the New York Times reported, noting that the converted Walmart store is now the largest licensed migrant children’s shelter in the country, but failing to point out that it was one of many stores that mysteriously went out of business when President Obama was still in office.

At the time, citizens became concerned when a number of Walmart stores mysteriously went out of business in Texas, Oklahoma, California, and Florida starting in April 2015. The mainstream media and its “trustworthy fact-checker” Snopes.com were adamant that the closures were due to plumbing problems, as Walmart claimed, and that there was no government involvement.

However, the reality that the former stores are, in fact, being used by the government, and that they are being used to imprison migrant children who have been separated from their parents, made headlines recently when Senator Jeff Merkley attempted to enter the converted Walmart in Brownsville, and he was denied entry by police.

“When I was at the center at McAllen Border Station, this is the processing center, earlier and I was admitted there and I did see the people, hundreds of children locked up in cages there at that facility,” Merkley said in an interview with CNN. “They have big cages made out of fencing and then wire and nets stretched across the top of them so people can’t climb out of them.”

While it is not clear whether any of the children in the detention center in Brownsville are being kept in cages, it is clear that the government worked diligently to keep facts from the public.

The young children who are forcefully separated from their parents are treated like prisoners and taken to detention centers where they are forced to live among hundreds of other children they have never met. The lifelong consequences can be detrimental, and in some cases, these children will never see their parents again.

The individual cases are horrific, and Congresswoman Pramila Jayapal recently shed light on her experience visiting a facility near Seattle where she met with more than 170 women who were taken into custody near the southern U.S. border.

“Thirty to 40 percent of these women came with children who had been forcibly taken away from them. None got a chance to say goodbye to their children—they were forcibly taken away,” Jayapal told The Nation. “One said she was deceived because they were in detention together. Then the CBP officers told her she was going out to get her photograph taken. When she came back, she was put in a different room, and she never got to see the child again. Some of them said they could hear their children screaming for them in the next room.”

A father from Honduras, who came to the United States with his family to seek asylum, was so distraught after he was separated from his wife and child that he killed himself while he was left alone in a jail cell last month.

In another case, a mother from Honduras who came to the U.S. seeking asylum with her family said she was breastfeeding her infant at a detention center when her baby was suddenly taken from her with no warning and no explanation.

A former employee of one of the detention centers is now speaking out after he said he quit in protest after he saw how horrific the process was for the children. Antar Davidson said he watched young children being “ripped from their parents” and sent to a detention center, where in some cases, no one spoke the same language they did.