Regular readers of Goldmoney’s Insights should be aware by now that the cycle of business activity is fuelled by monetary policy, and that the periodic booms and slumps experienced since monetary policy has been used in an attempt to manage economic outcomes are the result of monetary policy itself. The link between interest rate suppression in the early stages of the credit cycle, the creation of malinvestments and the subsequent debt dénouement was summed up in Hayek’s illustration of a triangle, which I covered in an earlier article.[i]

Since Hayek’s time, monetary policy, particularly in America, has evolved away from targeting production and discouraging savings by suppressing interest rates, towards encouraging consumption through expanding consumer finance. American consumers are living beyond their means and have commonly depleted all their liquid savings. But given the variations in the cost of consumer finance (between 0% car loans and 20% credit card and overdraft rates), consumers are generally insensitive to changes in interest rates.

Therefore, despite the rise of consumer finance, we can still regard Hayek’s triangle as illustrating the driving force behind the credit cycle, and the unsustainable excesses of unprofitable debt created by suppressing interest rates as the reason monetary policy always leads to an economic crisis. The chart below shows we could be living dangerously close to another tipping point, whereby the rises in the Fed Funds Rate (FFR) might be about to trigger a new credit and economic crisis. 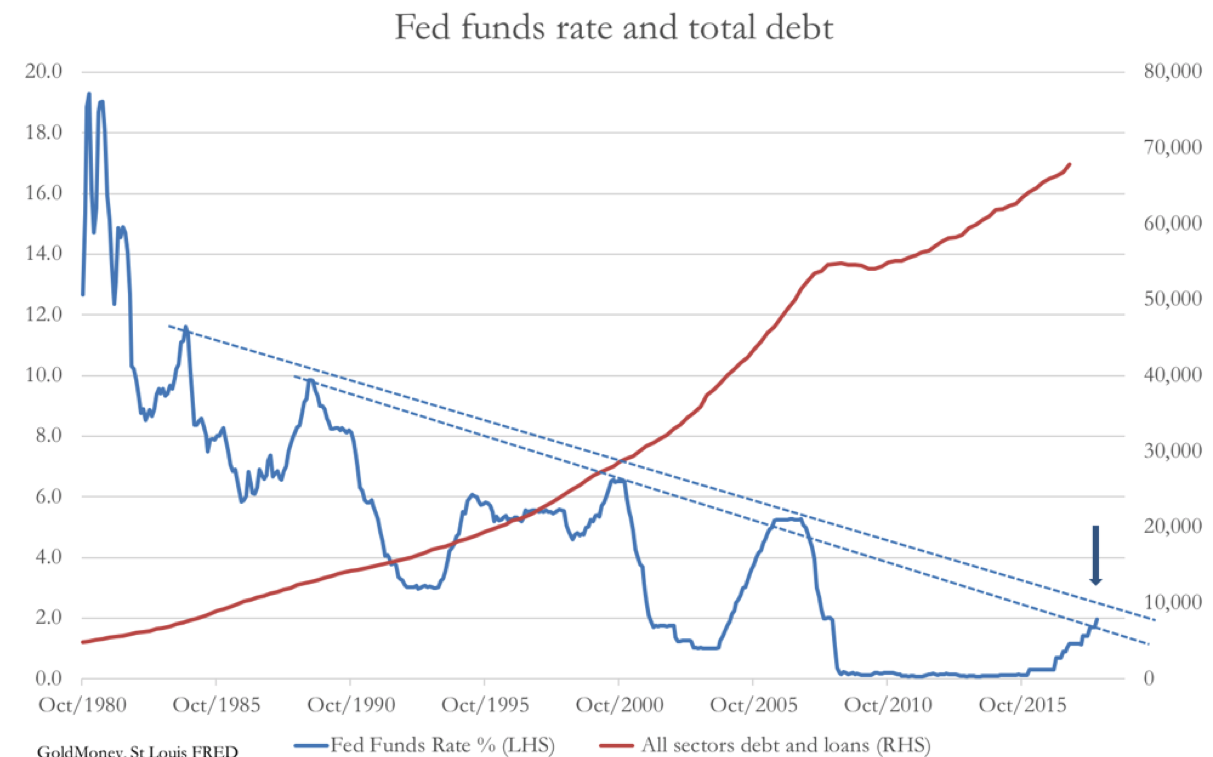 Previous peaks in the FFR coincided with the onset of economic downturns, because they exposed unsustainable business models. On the basis of simple extrapolation, the area between the two dotted lines, which roughly join these peaks, is where the current FFR cycle can be expected to peak. It is currently standing at about 2% after yesterday’s increase, and the Fed expects the FFR to average 3.1% in 2019. The chart tells us the Fed is already living dangerously with yesterday’s hike, and further rises will all but guarantee a credit crisis.

The reason successive interest rate peaks have been on a declining trend is bound up in the rising level of outstanding debt and loans, shown by the red line on the chart. Besides a temporary slowdown during the last credit crisis, debt has been increasing over every cycle. Instead of sequential credit crises eliminating malinvestments, it is clear the Fed has prevented debt liquidation for at least the last forty years. The accumulation of debt since the 1980s is behind the reason for the decline in interest rate peaks over time.

A quarter-point rise in interest rates, if it is reflected in the cost of servicing all outstanding debt, would be a burden to debtors of $167bn, and the increase from the zero bound is an added liability of over a trillion dollars so far. But it is more accurate and relevant to regard much of the accumulated debt as not immediately relevant, because it is in fixed interest bonds, including US Treasuries, and similar medium-term loans. Furthermore, where variable interest rates apply, nearly all major corporations have treasury officers which use derivatives, such as interest rate swaps, to protect themselves from interest rate changes.

Where it does matter is the effect of changes to the rate of interest that applies to circulating capital, put crudely on the cost of a business’s overdraft. Interest costs on circulating capital in turn determine the marginal returns of production, and therefore set the overall profitability of an enterprise.

Even if a business has no need to borrow, the cost of circulating capital is a measure that a business must pay attention to. If the returns on capital do not clear a hurdle rate based on current interest rates, a business would be better off using its money elsewhere. Central banks understand this, and their holy grail is to detect the rate at which a balance is achieved, and the economy can therefore grow at a sustainable rate. We see this reflected in monetary policy, whereby the FFR is moved up in baby steps, the effect on the economy being assessed after each rise. This point was confirmed by Jay Powell in yesterday’s press conference following the rate decision.

The Fed creates problems for itself
The drawback of state intervention in any field is that unexpected consequences arise as economic actors adjust to the opportunities created. The suppression of interest rates below their natural time-preference value is a transfer of benefit from savers to borrowers, so businesses are encouraged by suppressed borrowing costs to borrow to expand production. This is, of course, the intention behind monetary policy early in the credit cycle. But when the extra demand for capital goods (the goods used to produce final goods and services for consumption) develops, commodity and other intermediate production prices begin to increase reflecting credit expansion, and it is rising prices that always force a central bank to end interest rate suppression. They have to increase interest rates to a level sufficient to support the currency and contain the price consequences of earlier monetary inflation. Monetary policy targeting a neutral rate has to be put aside.

This is a problem that arises from intervention. If they must intervene to correct the inflationary effects of earlier interventions, central banks would be better more closely monitoring commodity prices and the prices of production rather than relying mainly on consumer prices, because consumer prices are the last to be affected by monetary expansion, except where the stimulus is directly through consumer borrowing. In other words, monitoring prices should be more flexible than it is under current inflation mandates.