“It was just one of those things” – Cole Porter

Take a look at this graph:

(The graph says, in Spanish, “Evolution of the human population”, and it only goes up as far as 6 billion humans; the world’s humans number about 7.3 billion today). 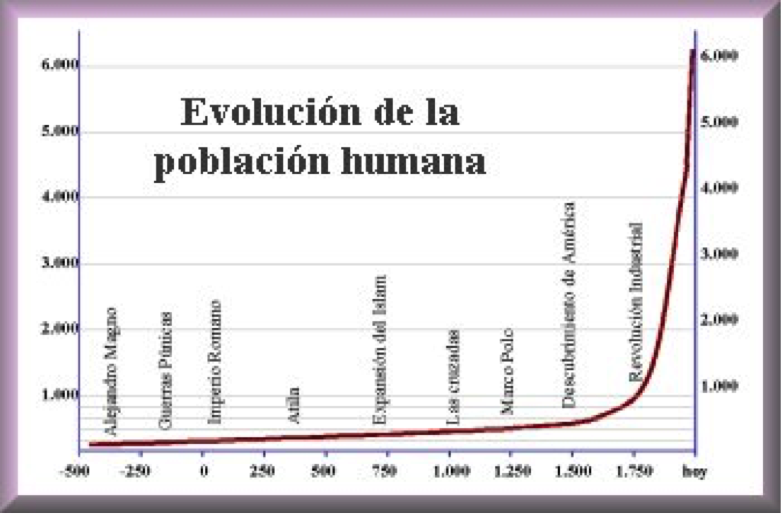 The data for the number of humans on this planet in very distant centuries may, perhaps, be underestimated; if so, we shall never know. In any case, as of 1750 the data become more trustworthy.

What is striking about the graph is that demographic growth since 1750 has been explosive.

In the XVIIth Century, the Englishman Francis Bacon (1561 – 1626) established the rules governing the scientific method. In the course of the century, the thinkers of the West began to turn from the spiritual teachings of the Catholic Church and of Protestantism, and direct their curiosity to investigations on Matter, through the medium of the Physical Sciences.

In the XVIIIth Century, when the graph already shows a clear growth trend of humanity, the intellectual world of the West was boiling with inventions born of the Physical Sciences. One of the first important inventions was a water pump created by James Watt (1736 – 1819). This pump used the energy latent in coal to create water vapor, which was retained under pressure; the pressure of water vapor moved the water pump.

Very soon, the energy latent in coal was applied massively, to move all sorts of machinery, and displaced the limited energy and limited production that had been provided by human labor.

The trend to an increasing number of humans which the graph shows, which began about 1750, was caused by the injection of energy into human life that was furnished by coal: human productivity multiplied enormously and offered sustenance to a growing number of human beings.

The period of rapid development made possible by the energy furnished by coal, continued into the XIXth Century, and sustained the corresponding growth in the human population of the world.

Oil makes its appearance on the world stage as a purveyor of energy at the beginning of the XXth Century, and takes over the first place, hitherto occupied by coal. Oil possesses a multitude of physical characteristics that make it more useful than coal.

At present, oil injects into the human life of the planet every day, the energy latent in some 69 million barrels of crude oil. (2016, according to IEA, the International Energy Agency).

The explosive growth of the human population of our planet, has been the result of the injection of energy into human life in ever-growing quantities.

Institutions established in prior ages have been weakened or have become inoperative as a result of the massive injection of energy into human life. The social stability of other times has vanished. Clear reasoning has become scarce. Gold and silver, which served as a means of real exchange, have been substituted by fake money that is issued in unlimited quantities.