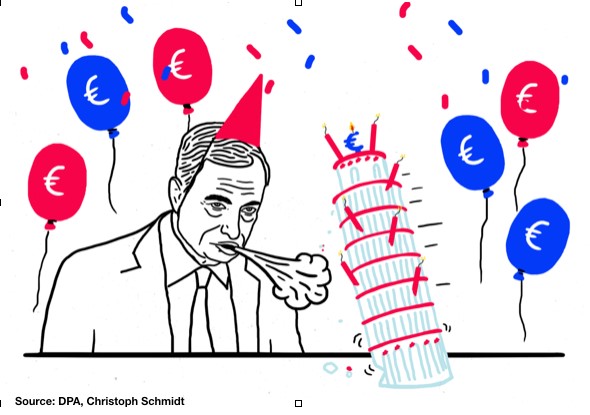 The ECB (European Central Bank) just had its 20th birthday. But there is really nothing to celebrate. The EU is in a total mess and the Euro which was launched on January 1, 1999 is a failed currency. Every President of the ECB has had to deal with fires that had very little to do with price stability but were more a question of survival. Most of these fires were a lot more serious than the candles in the Euro cake on the left which Draghi is trying to blow out. During the French ECB Trichet’s watch, he had even bigger fire to blow out which was the Great Financial Crisis that started in 2006.

ECB €4 TRILLION PRINTED – OUTSIDE MANDATE
The only mandate of the ECB is to maintain price stability. Well that clearly has been a very costly exercise. Between 2006 and 2011 the ECB balance sheet trebled form €1 trillion to €3 trillion. But the crisis didn’t finish in 2011. After a brief reduction in debt, the balance sheet expanded fast from €2.3 trillion in 2014 to €4 trillion today. It is quite remarkable to watch the creation of a supranational bank which automatically creates a purpose for its own existence in the form of massive money printing. This is no better than burning money and serves no purpose whatsoever. And it is of course far distant from its purpose of price stability.

Money printing creates high inflation and eventually hyperinflation. The only reason why we haven’t seen high conventional inflation in the EU is that all the printed money, just like in the US, has stayed with the banks. The result has been low inflation in consumer products but huge asset inflation. Thus, we have seen massive increases in stock, bond and property prices but not in consumer prices. So major money creation by the ECB and the Eurozone banks have so far had only minor inflationary impact. But as the velocity of money increases so will inflation. This moment is not far away. The same will happen in the US. As velocity of money accelerates US inflation will pick up rapidly.

ITALY ON THE ROAD TO PERDITION
The EU now has major economic and/or political problems in many countries. Italy’s new coalition government is a protest against the EU and Euro. With debt to GDP already the highest in Europe, the new regime will exacerbate the problems. Lower taxes and higher spending will guarantee that. As the chart below shows, Italian debt to GDP is already 140%. By 2050 this is projected to grow to 210%. As interest rates go up, servicing the growing debt will soon absorb all tax revenue. Italy will be bankrupt long before 2050 and default on all its debt. 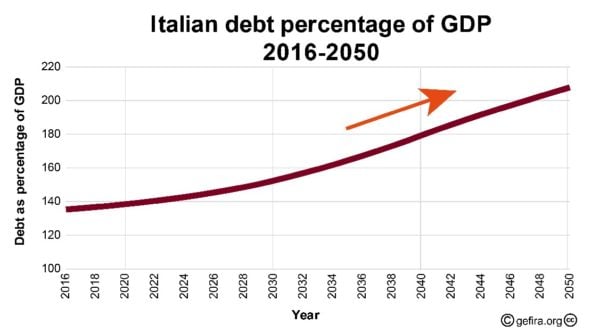 Between now and 2050, the Italian working age population is forecast to decline by 1/3 form 36 million to 24 million. There will be a lot less people to pay for a much higher debt. 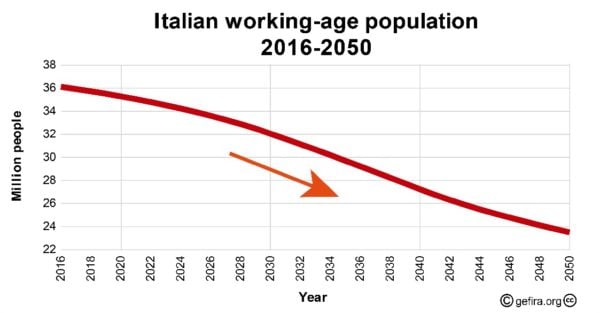 The consequences of massive debt, economic stagnation and population decline will be a much lower GDP which is expected to go down by 35% by 2050. 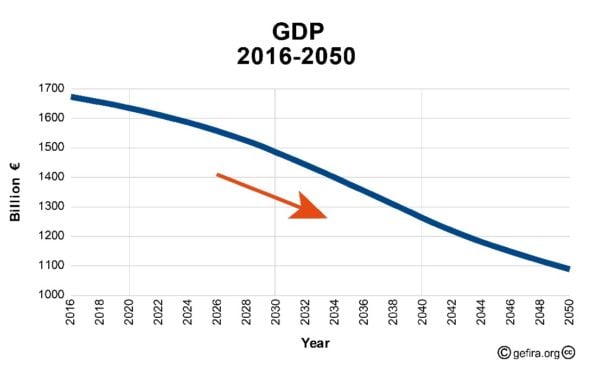 If the above forecast of a major fall in the population and GDP as well as a substantial increase in debt is even vaguely accurate, Italy is on its way to the Dark Ages.

ITALY – A GLORIOUS COUNTRY THAT DESERVES A BETTER DESTINY
I must stress here that I find it so sad that this glorious country is suffering so much already and will suffer a lot more. Personally I love Italy, the people, the food, the architecture, the history and the Giola di Vivere (joie de vivre) of the Italians. It will be so tragic to see all of this disintegrate. Hopefully it will take a long time although sadly the crisis might actually be around the corner.

ITALY IS NOT ALONE
But Italy is just one of many countries which will collapse in coming years. Spain is in a similar situation and the prime minister has just been kicked out. Greece’s problems have never been resolved and this fine country is sadly also bankrupt and so are the Greek banks. I could go on with Portugal, France, Ireland, the UK and many others. Most of these countries have insoluble problems. It is only a matter of degree and time when the EU/Eurozone house of cards comes down. The map below shows potential leaving countries and names.