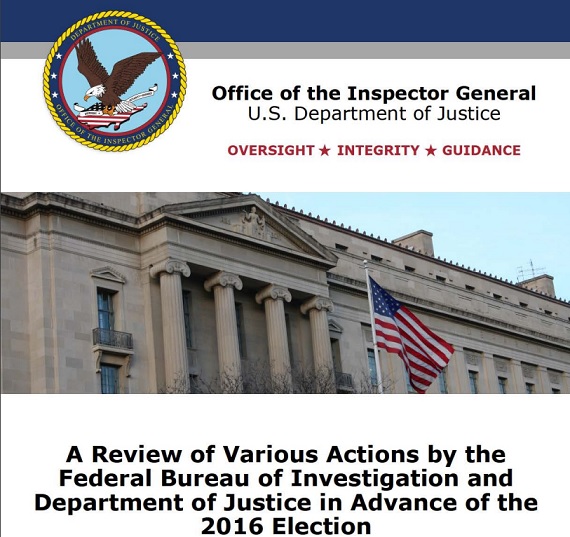 Hours before the long-awaited IG report detailing the Inspector General’s investigative conclusions regarding FBI handling of the Clinton private server/email criminal investigation, selective portions of the IG’s conclusions were “leaked” to the press, who immediately started spinning like mad to soften the blow of the report.

PREEMPTIVE SPINNING TO ATTEMPT TO CONTROL THE NARRATIVE AND LIMIT FALLOUT

Misleading Narrative: The “narrative” being pushed before the actual report has been released, focus on claims that Comey and the FBI agents, specifically Peter Strzok (who played a key role in both the Clinton investigation and the Russia probe) and FBI special counsel Lisa Page, didn’t let their “political bias” affect their decisions and actions.

That is how it is being pushed by the mainstream media in their promotionals and headlines, such as NYT titling their piece “Comey Cited as Insubordinate, but Report Finds No Bias in F.B.I. Decision to Clear Clinton,” but the actual wording from the conclusion as shown by Steven Dennis at Bloomberg, is “Peter Strzok & Lisa Page exchanged anti-Trump texts, BUT ‘we did not find documentary or testimonial evidence that improper considerations, including political bias, directly affected the specific investigative actions we reviewed’.”

Notice the deep state spin there by their propaganda arm, claiming to find “no bias” in the decisions made, when in reality the IG couldn’t find “documentary or testimonial evidence,” proving that the political bias “affected” the outcome.

In other words, there is no paper trail proving they acted on the bias the IG deliberately highlights in showing the text that was missing from earlier document releases.

The political bias is made clear with the release of a previously redacted statement, to which the IG highlights in his report, from Strzok to Lisa Page on Aug. 8, 2016:

One example cited in the new report is an exchange of texts between Strzok and Page on Aug. 8, 2016. Page questioned whether Trump would become president. Strzok replied: “No. No he’s not. We’ll stop it.”

Earlier releases of the texts from that day were missing Strzok’s reply, meaning the FBI/DOJ were deliberately trying to hide that statement from the public.

The media narrative before the IG drop focuses on the fact that the IG is going to condemn FBI violations, the Strzok/Page texts, former FBI Director James Comey being labeled “insubordinate,” and that there will also be criticism regarding how former Attorney General Loretta Lynch handled the Clinton investigation.

Those are the talking points the Mockingbird Media want the public to focus on. First thing to remember is that the report is 568 pages.

Interestingly it is Fox News, not the liberal media propaganda arm of the deep state, that highlights another finding: ““Foreign actors” obtained access to some of former Secretary of State Hillary Clinton’s emails — including at least one email classified as “secret” — according to a new memo from two GOP-led House committees and an internal FBI email.”

That little tidbit, which had previously been speculated on, but is now confirmed, came directly from a Strzok email dated May 17, 2016, which stated “we know foreign actors obtained access” to some Clinton emails, including at least one “secret” message “via compromises of the private email accounts” of Clinton staffers.”

We also see from the report that Comey also used personal email for FBI business, which is extremely ironic considering what they were investigating Hillary Clinton of.

Normally we at ANP would want to go through the full document and highlight as much as possible, while offering it to our readers, but since this report has been long-awaited, we are publishing it in full first. Readers are encouraged to go through it for themselves to highlight what they find important.

Feel free to do so in the comment section.