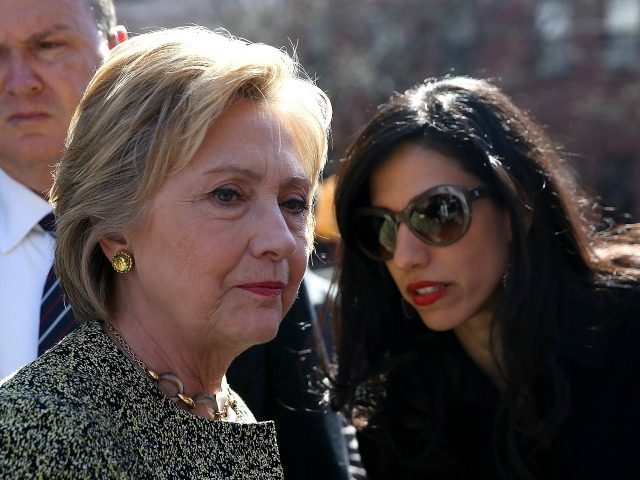 NEW YORK — In its extensive report on the Hillary Clinton email probe, the Justice Department’s internal watchdog raised significant questions about why the FBI did not examine the contents of Clinton aide Huma Abedin’s private email accounts and did not seek to obtain Abedin’s personal devices to determine whether classified information was exchanged.

The report noted Abedin should have been a point of interest since the FBI obtained from other sources classified email exchanges between Clinton and Abedin that were missing from the 30,490 emails turned over to the State Department by Clinton’s attorneys. Clinton had claimed the remaining emails were not work-related.

Also, the report documented that the FBI did not go after Abedin’s emails or devices even though she was “the only State Department employee, besides Clinton, with an account on the clintonemail.com domain on Clinton’s server.”

The 500-plus page report authored by the Justice Department’s Office of the Inspector General cited witnesses saying they believed “there was a flaw in the culling process, which resulted in the exclusion of most of Abedin’s clintonemail.com emails from the State Department production.”

The report cited FBI General Counsel Jim Baker saying he believed the FBI has probable cause to review all of Abedin’s email accounts.

More questions are raised about the FBI failing to investigate Abedin’s emails given that, as Breitbart News reported last week, the IG report found that the FBI never actually designated Clinton as a subject or target of the official probe. Instead, the probe was designated “unknown subject(s),” known within the FBI as UNSUB, even as it became clear the investigation had started to focus on Clinton.

The report stated that “witnesses told the OIG that the FBI did not identify anyone as a subject or target during the investigation because it was unclear how the classified material had been introduced to the server and who was responsible for improperly placing it there.”

Still, the FBI did not attempt to obtain Abedin’s emails as part of the investigation and did not review all of Abedin’s emails on Clinton’s server, according to the report.

Witnesses told us and documents we reviewed showed that the Midyear team did not review all of Abedin’s clintonemail.com emails on the server; rather, they limited their searches to her email exchanges with Clinton.

We questioned why this limitation was put in place, given that the purpose of the investigation was to generally assess any mishandling of classified information in relation to Clinton’s server.

When the laptop of Abedin’s husband Anthony Weiner was obtained as part of a separate investigation, the “Midyear” team, as the Clinton investigative unit was known within the FBI, did not even draft a search warrant application to review all of Abedin’s emails on Weiner’s laptop.

The report cited FBI General Counsel Baker as expressing concern that Weiner’s laptop was being reviewed too narrowly, while explaining the agency had probable cause to sift through all of Abedin’s emails.