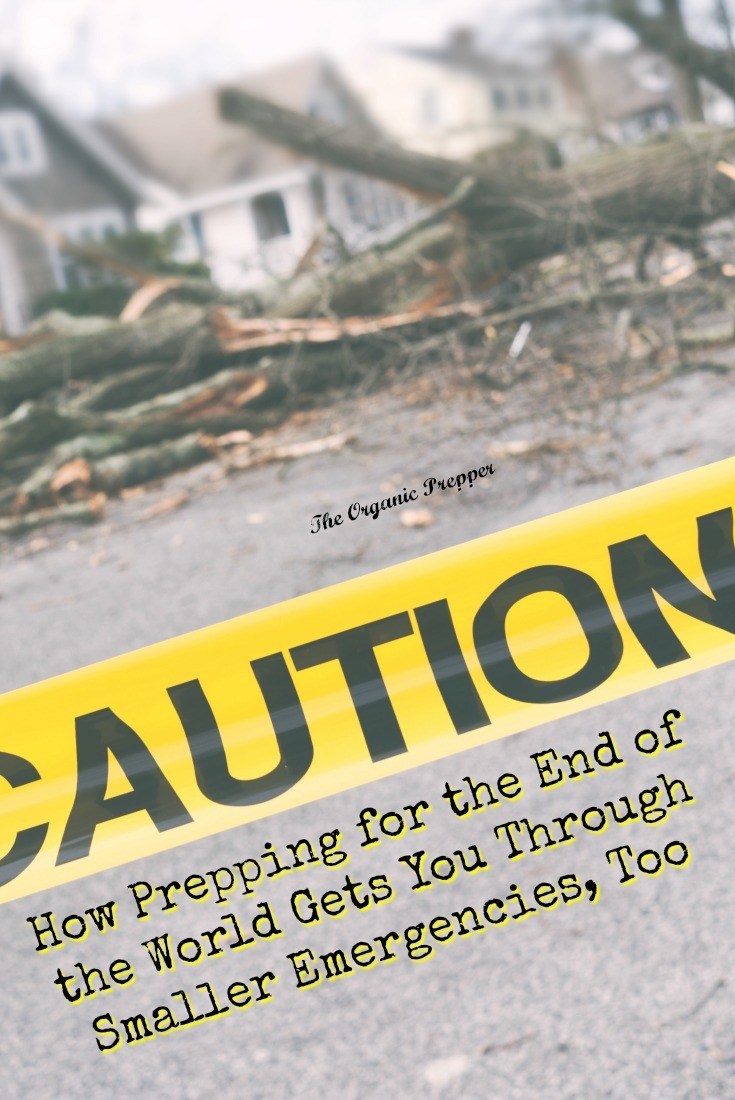 If you’re like me, a lot of your prepping is for end-of-the-world events, but I recently learned how my post-apocalyptic plans can help with smaller emergencies, too.

One of my favorite books is One Second After. Not only was the story gripping, but, it motivated me to transition from having some “extra things for storms” to hardcore prepping. While, generally speaking, that is a good thing, the story motivated me to focus on serious SHTF events. The kind that would end life as we know it, destroy society, and make Mad Max look like a kindergartner’s storybook. While that is entertaining and good to prep for if all other bases are covered—it can actually be detrimental if more realistic bases are NOT covered.

Even after I corrected my rookie mistake, two SHTF-mini editions led to several “face-palm” moments. One event was a serious wind storm that wrecked havoc; and, the other was when our house was struck with lightning. I had not even considered prepping for the latter. I learned later that it’s not that uncommon in our area; so, guess what will be moving up my priority list?

It was pretty eye-opening to see what preps worked, what didn’t, and where the gaps were from these two “mini” experiences. If we ever DO face the Apocalypse, the lessons learned from these little challenges will be magnified a thousand fold—and that is a sobering thought. On a positive side, our preps were also pretty multi functional.

While we may have gotten our supplies for a particular emergency, they were utilized well for ones we weren’t even thinking of at the time of purchase. So, if you are like I used to be and have focused on Armageddon or you just get stuck in an event you didn’t consider—all is far from lost.

The storm
Thanks to modern weather reports, I knew the storm was going to come through; and, I felt pretty prepared. But, I had not appreciated the intensity of this storm nor its impact. It came on so fast and strong—and everything seemed to go sideways at the same moment. The wind seemed like a living creature with its strength and howling. A really pissed creature.

As my dogs began to whine and huddle under the table I looked outside to our deck for my first “oh crap” moment. Our cast iron deck furniture—which is very heavy and has always remained in place—was being dragged and flipped as if by an invisible tantruming toddler. Running outside I prayed I could get the chairs inside and the table secured before one of the pieces went through our windows. Having just had surgery on my feet—this wasn’t an easy task; and, as I tried to secure the table my “plans” went awry.

I pulled the table to a more sheltered area; and, once there I tried to flip it so the top was down and legs were up. Less surface area for the wind to grab and drag. But while “flipping” this monster table the wind saw its chance and attacked at just the right moment, yanking it from my hands and slamming it onto my recovering feet.

Tears fell and some not so “Southern lady” words were absorbed into the wind as I limped along to finish the job. The pain and frustration brought my husband to my mind. I wondered if he was traveling home and if he was ok—and I wished he was there.

Once back inside, I barely had time to wipe my eyes before the power went out with a blink. Just like that. Almost immediately my children began emerging with cries of “the INTERNET IS DOWN!!!!” To them, it was now an emergency. While deflecting a thousand variants of “how long will it be DOWWWNNN???” I evaluated the flying tree limbs outside, the torrential rain now coming down; and, I ran through the next steps in my mind. Thank God we have a generator (I had just had a maintenance check done) that did its job and kicked in at that moment. But, I didn’t know how long this outage would last or how much fuel we were starting with (the last fill up was awhile back). I realized I would need to be careful about conserving fuel.

Praying I would find it working, I went first to our fridge. The one that holds my son’s insulin. Thankfully, it was humming along. Then, limping and biting back curses, I went throughout the rest of the house and checked freezers, water pump, other fridge, lights, heat, etc. to confirm everything that was supposed to be working actually was. The items that were hooked up were on track—except for the internet. Our system was down and I had no idea why.

Again, I wished for and worried about my husband. Electronics were his expertise. In the back of my mind, I wondered how I would be able to assess how bad things were in the neighborhood and beyond– but it had to wait. I also had noted that not all the things I thought were hooked to the genny actually were. Surprise. Several areas—including the bathrooms on the main floor—had no lights for example. I had a tub of flashlights and batteries—but the batteries were not installed. So, I lit some candles and began assembling for each person. Now all this was in about 30-45 minutes from the start—and the dogs were still whining in fear and the kids in frustration.

Then things I’d never even considered happened.
As I was putting batteries in I noticed the doors from the deck into our kitchen were bowing in with each howling wind gust as if being hit by a battering ram. With each attack, I could see a gap growing in the middle of the French doors and it was obvious that they would burst open at any moment letting the wind, rain, and debris run roughshod through our kitchen.

I stared at them for a second a bit dumbfounded. That possibility had never occurred to me to prep for. What do I do? The battering ram image stuck in my mind—and I thought “it’s a force just like an invader. . . aha!!!” I limped to my supply closet and got the Master Locks purchased for extra security in the event of an apocalyptic meltdown.