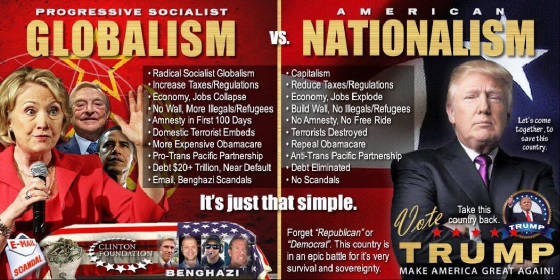 President Trump has announced that the U.S. piggy bank will no longer subsidize or be sucked dry to finance a pack of ungrateful allies. Keeping the Socialist EU afloat and putting up with backstabbers like Canada or allowing Japan to roll up massive trade surpluses must stop. The latest rumblings out of the UK are that all efforts are working overtime to nix the will of the Brit public from the Brexit vote. As for corporatists within the United States, the bulwark of opposition to Trump’s push to demand reciprocal treatment from “so called” trading partners means an end to the gravy train of plundering American workers and ripping off a viable domestic economy.

The business press has followed the pseudo political news reporting to trash all things Trump. The unbearable whining from the likes of ‘Free Traders’ Dagen McDowell and Charlie Gasparino on Fox business illustrates that fair and balanced distorts the value of understanding the core reason why our jobs were systematically moved overseas. Such globalists are not reporters. They are sycophants for their corporate masters.

A Merchantry economy encourages Mercantilism that benefits our own citizens and builds a solid growth in national wealth. This affluence should not be limited to financial plutocrats. The enhancement in upward mobility must foster a prosperous middle class. Globalists are ardent in their goal to strip opportunity from the masses and are committed to curtail any real competition.

Trump’s approach to negotiate bilateral trade agreements is prudent. Replacing multi country or regional accords which effectively are detrimental to our industry, intellectual innovation and growth in new inventions, is necessary. The internationalists fear the thought of a strong and independent America.

With the conclusion of another yearly Bilderberg meeting, the neo feudal lords are running scared because their destructive system of interdependency is finally being challenged by an American President.

The populist sentiment that is breaking out all over Europe may well bring an end to the Fascist Angela Merkel regime. Germany has made significant strides in achieving their objective for global dominance through such elitist organization as the G7. What is most telling is the intense opposition of the EU to continue the isolation of Russia from the rest of the European continent.

“Woe Is Me” is that biblical phrase that applies. “Job 10:15: If I be wicked, woe unto me; and if I be righteous, yet will I not lift up my head. I am full of confusion; therefore see thou mine affliction.” The globalists are anti-Christians and Russia has initiated a religious restoration that threatens the secular and satanic culture which is rooted in European collectivism.

It should be obvious that the G7 is a mere shadow of economic power that it once achieved. Thanks to globalism, their GDP demonstrate that the U.S. does not need the socialists and their one sided trade deals. It is long overdue to dish out a wake-up call and tell these greedy trade extortion bloodsuckers to pay the actual NATO costs for their own defense.

Just maybe, they would rethink their obsession over pushing the Russian bear into the arms of the Red Communist Chinese. However rational this approach would be, the main opposition comes from the perennial warmonger and empire expansionist; namely, the United States.

Trump the Disruptor is much better than Vlad the Impaler. The EU defends their violent history, especially if they can dupe the Americans to do their fighting for them and shed blood to maintain the globalist trade racket.

The elitist resentment about any possible retuning of the ground rules for a fair trading system has those with a vestige interest in trade deficit transactions pounding the table and using their lobbyists to spread around bribe funds to put an end to a Merchantry economy alternative. The consumer has been duped. Cheap foreign imports drive the trade shortfall. Balance of payments will never come into equilibrium without a fundamental reset.

What is needed is an aggressive imposition of tariff offsets to achieve the reciprocal equity which is the solution to a trading economy that benefits all parties.

Emmanuel Macron of France, Theresa May of UK and Justin Trudeau of Canada seem to be following the G7 orders from Angela Merkel of Germany. The contempt they demonstrate to Trump’s efforts to break the globalist juggernaut is a clear admission who actually controls the governments and economic policies in these countries.

All the bullish economic metrics has the U.S. economy humming. The fake news mainstream media is busy planting doubt in the continued successes of Trump economic programs. Establishment forecasts call for a recession or worse is about to overtake finance and commerce. No effort is spared to throw a wet blanket over consumer confidence. However, to no avail, the public is not buying the anti-Trump rhetoric.

The G7 needs to be on death watch. The lesson that will follow its funeral is that ordinary citizens will not tolerate being used as sacrificial lambs for temple worship to the globalists. When the New World Order is put on visual display the political potentates expose the bleak results of the economic distribution that is available for the majority of their populations.