by Tom Luongo, via Russia Insider: 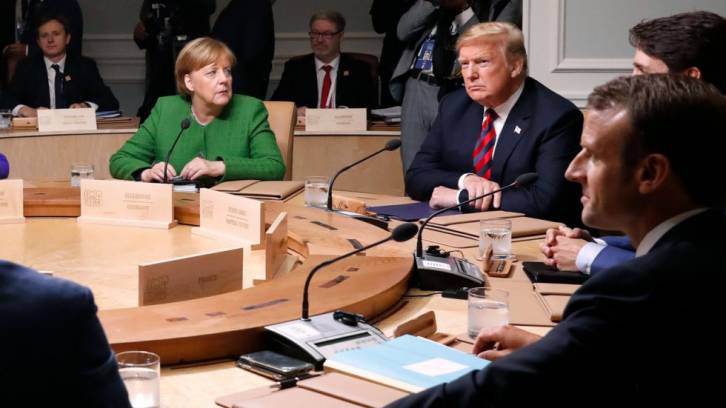 I have to say that as much as I don’t like the direction Trump’s foreign policy has gone, there are still plenty of moments of unbridled joy in watching the man work a crowd.

His suggestion of allowing Russia back into the G-7 is one of those moments. Trump has a nearly preternatural way of getting under the skin of his opponents. And this stink bomb was one of them.

It highlighted the divide between the G-7, one of the most important tools of control by the globalists, and Trump. It also highlighted its irrelevance to him, since China was hosting Russia and six other important countries at the Shanghai Cooperation Organization Summit in Quindao at the same time.

In effect, Trump was saying, “Why should I listen to you? You aren’t important enough to listen to.”
It also highlights how he’s been tough on Russia while his domestic opponents still cling to the fantasy he’s somehow Putin’s water carrier. Putin and Trump haven’t spoken since the end of March, according to Putin.

He’s moved on and, like Trump, makes no bones about not needing the G-7’s approval of his actions.

Most importantly, however, Trump dared them all to kick him out of the G-7 for not playing by their rules, just like they did to Putin for reunifying with Crimea.

I’ve been hard on Trump about his trade policy. I fundamentally do not believe tariffs solve anything. They are a symptom of deeper economic problems. All they do is shift capital away from profitable endeavors to unprofitable ones for political purposes.

But, at the same time if he truly is using them to get all the protection barriers to trade dropped, then I will applaud him loudly.
I don’t, however, believe that is his ultimate goal. So, a lot of this performance at the G-7 this weekend was just that, performance.

The more I watch Trump in action the more I’m convinced his goal is to break Germany. His antipathy for Angela Merkel is palpable. He knows she’s the main conduit for the worst impulses of the globalists meeting at Bilderberg this weekend.

He knows her goal is to destroy Europe through forced immigration and internal wealth transfer payments. So, it almost seems to me that any policy stance he takes is designed to harm Germany and that includes continually driving a wedge between Germany and Russia.
You can also see his pulling out of the JCPOA this way. The EU benefited from the deal through cheap Iranian oil paid for with euros, not dollars. German trade with Russia is rising, up more than 20% year-over-year in 2017. Granted, it is still far lower than before the sanctions, but the trend had reversed.

Trump is no dummy, contrary to popular opinion. He knows that a Germany independent from U.S. political control is a nightmare for a lot of people in Europe. It wields a lot of control over the political process in the EU. Previous to Trump Merkel et.al. were in cahoots with the U.S. to subjugate Europe, expand NATO and cut off Russia.

Now Trump has clarified the relationship, not as partners, but as servants. And this is why the G-7 are so angry with him.