A massive survey of recent homebuyers reveals all.

Have you ever woken up after a night of drinking, and only had a vague recollection of what happened? Then your responsible friend sets off a chain of text messages, trying to figure out where you went wrong? Well that’s what the Canadian real estate industry just did, and man-o-man did people screw up. The Canada Mortgage and Housing Corporation (CMHC), the Crown corporation in charge of mortgage liquidity, conducted a massive survey of recent buyers in Toronto, Vancouver, and Montreal. After getting drunk on exuberance, buyers indulged in a little too much borrowing, blaming everything from land scarcity to foreign buyers for the bidding wars they entered.

The CMHC designed a massive survey to try and figure out where buyer exuberance started. Buyers in Toronto and Vancouver saw a quick rise in home prices, and adopted “excessive” expectations of price growth. To determine where the disconnect between fundamentals and price growth started, they took a novel approach – they asked the buyers. 30,000 recent buyers were sent surveys, asking questions ranging from what their budgets were, to why they didn’t stick to their budget.

The majority of price movements were driven by exuberance in Toronto and Vancouver. Yes, fundamentals played a part – but a small part. Instead, the survey focuses on finding out which data points buyers felt drove their FOMO. The fear of being “locked out” is always a powerful motivator, which tends to amplify the read on fundamentals.

Now, issues like foreign buyers are important, and need to be tracked and dealt with. However, no one forced anyone to buy in the small window of exuberance. The homeowner life didn’t choose these buyers, buyers chose the homeowner life. Despite what you may have heard, not all renters are poor and struggling to eat. Actually, a surprising number of bank executives are now renters, but I digress. Let’s find out what these people were thinking.

First up, the CMHC found that buyers use “rule of thumb mechanisms” to determine home prices. “It’s a hot market,” “I can’t miss out,” and “it’s really tight right now” are phrases analysts cited as examples of this mechanism. According to the CMHC, these were “phrases pushing homebuyers to overvalue an investment.” FOMO helps to build an overreaction to data, which resulted in a lack of self-control. The best example of this is a buyer’s willingness to engage in a bidding war.

The Discipline Was Not Strong With These Ones

FOMO was the primary driver of breaching, with most of these homeowners buying sooner or later than expected. CMHC analysts believe that those that bought sooner likely lacked market information, pushing budgets higher. Those that bought later couldn’t find what they wanted in their budget, driving them to an upward budget revision. 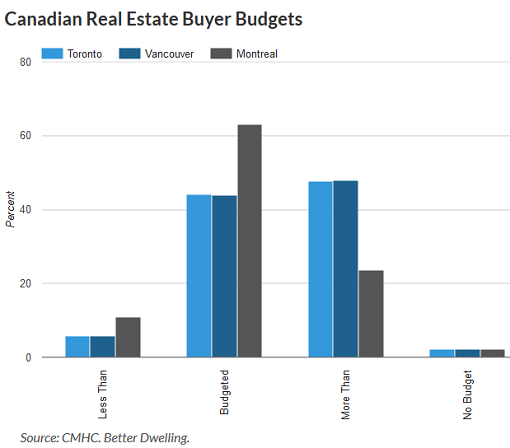 The Foreign Buyers Made Me Do It

If Canadian real estate markets had a phrase of the year, “foreign buyer” would have been it in 2017. In Vancouver, 67.8% of buyers said foreign buyers had “a lot of influence” on home prices. Toronto was a little further behind, but not much at 47.88%. To contrast, 42.31% of Montreal buyers felt foreign buyers had a strong influence. Foreign buying is actually a part of the development strategy in cities like Vancouver, but they always tend to show up in droves when local credit expands – just like in the late 1980s. Funny how that works. 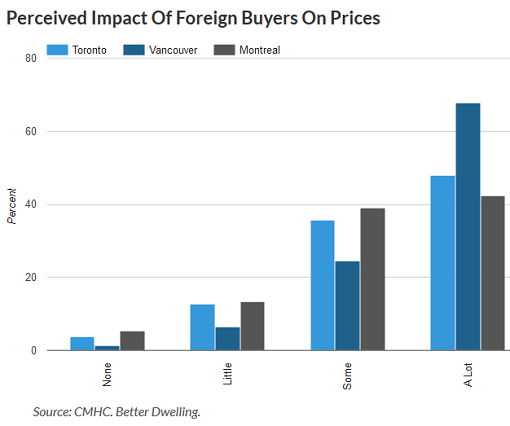 Who Needs A Job When You’ve Got Credit?