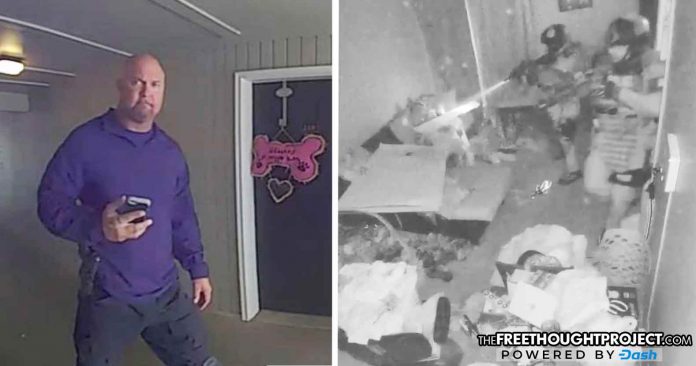 A barber claims his home was raided by police after they accepted a false testimony from a confidential informant with a long arrest record.

Little Rock, AR – A barber was asleep on the couch in his apartment when a SWAT team blew the front door off of its hinges with such force that it flew across the room and landed on top of him. The officers stormed his apartment, arrested him, and then later informed him that he had been accused of selling $100 worth of cocaine to a confidential informant.

In an exclusive interview with The Free Thought Project, Roderick Talley said he has video evidence that the informant—who he claimed has a long arrest record—lied about the sale. The fake drug buy led to a very real search warrant, and when the SWAT team did not find cocaine in Talley’s apartment, they claimed to have found cannabis instead.

Armed with footage of the fake cocaine purchase, Talley and his attorney requested a probable cause hearing. Prosecutors promptly dropped all charges against Talley who is now calling out Little Rock Police for using unreliable, and even criminal “informants” as probable cause to obtain what he believes are illegal search warrants, which have led to more than 50 unconstitutional searches, seizures, and illegal charges against a mainly minority community.

Talley told TFTP that he initially installed a doorbell camera because he has been a victim of burglary multiple times. He also installed a surveillance system inside his apartment. When the supposed cocaine sale took place, Talley was at the barber shop cutting hair. He and his friend watched what police later said was a $100 cocaine sale happen on live video. The recording was broadcast live to his smart phone and also stored on a cloud-based hard drive. He said he and his co-worker watched from the barber shop as the so-called informant came to the door. No one was home at the time. They wondered who he was, what he was doing, and why he was there. From there, the police department took the sworn testimony of a known criminal and used it to obtain a search warrant, signed by a judge, and later executed by SWAT team members.

The fake cocaine purchase was caught on a doorbell camera showing no one even came to the door to speak to the informant, let alone sell him cocaine. A day later, the surveillance camera captured a member of the Narcotics Street Team taking pictures of Talley’s front door.

Below is the video of the alleged cocaine purchase, which took place on Aug. 3, 2017, according to
a testimony from the confidential informant, Kenneth Ray Robinson, pictured in the video.

Here is a video of one of the members of the Narcotics Street Team members caught on camera on Aug. 4, 2017, taking pictures of the door he would soon blow off of its hinges.