The world events of the past days are significant far beyond the apparent divide within the G7 industrial nations. If we imagine the planet as a giant electric force field, the lines of flux are in dramatic reordering as the post-1945 global dollar-based system comes to its disordered end phase. Europe’s political elites are currently split between rationality and irrationality. The developments to the East however are drawing more and more force and we are seeing the early phases of what might be called a geopolitical polarity reversal within the EU from West to East. The latest developments across Eurasia including the Middle East, Iran and above all between Russia and China are gaining in importance as Washington offers only war, whether trade war, sanctions war, terror war or kinetic war.

The spectacle of a US President tweeting about its long-standing NATO ally and bordering country, Canada, openly calling the Canadian Prime Minister “dishonest and weak,” and threatening new import tariffs for cars imported from Canada, is from all appearances not some whim of an erratic US President but rather a calculated strategy of putting all US allies off balance. It comes after Washington unilaterally tore up the Iran nuclear agreement to the dismay of Europe, Russia and China as well as Iran. On top of that the US announced new trade war tariffs on EU aluminum and steel in open violation of WTO agreements.

If we take these actions as symptoms of something deeper, we need only to look at the exploding US debt levels as I have noted before. The latest Trump tax legislation will bring an estimated $1 trillion in annual Federal budget deficits for the next decade, added to the current $21 trillion Federal debt. Household private debt is at levels higher than before the 2007 financial crisis. Corporate debt, including junk bond or “below investment grade” debt, is sky high owing to a decade of Fed near zero interest rates.

There is another element to the actual US economic situation little noted. According to a recent study by the USA Consumer Financial Protection Bureau, while average family income in comparison with many other countries appears nominally high, the reality of fixed costs such as food, housing, mandatory health insurance, has created a new kind of poverty. The survey concluded that near 50% of Americans have difficulty paying monthly bills and as many as one-third have at times lacked money for food or a decent living place or medical treatment. A recent study estimated that health care costs alone for a family of four costs more than $28,000 a year or half median income.

Added to the grim US domestic outlook, the Boards of Trustees for the state Medicare insurance fund just announced that the trust fund will be depleted in 8 years. As well the Social Security Trust Fund, owing to the large number of the postwar Baby Boomer generation taking retirement and the declining number of younger workers paying in, will run the first deficit this year since 1982, as both fertility rates and population growth decline. And the State of New Jersey just froze all spending as financial disaster looms. As the Fed raises interest rates, a chain-reaction of corporate and household loan defaults is pre-programmed.

In brief the US economy has been bled by the tiny 1% of the wealthy to the breaking point. While the US stock market currently enjoys new highs owing to the decade of easy money, the underlying economic reality of the United States is precarious to put it mildly. In terms of preserving her Sole Superpower grip on the world, increasingly there are two ways open for the powers that be: War or triggering a global new financial crisis worse than that of 2008 and using the crisis to regain control over world capital flows.

The fact that a US President is forced to initiate such tactics as trade wars against established G7 allied nations suggests that desperate measures are on the agenda. In reality the battle is for the future of the EU, especially Germany.

Notable in this regard are the recent visits of the German Chancellor Merkel to meet with both Russian President Putin and China President Xi Jinping. Presumably more was discussed than the Iran nuclear agreement. The paradox of an official German government support for the sanctions on Russia at the same time Germany signals it needs Russia as an ally in certain areas, underscores a kind of political schizophrenia in the EU today. Economically it is increasingly clear that growth markets lie in the East, notably with the vast China-led Belt, Road Initiative of high-speed trans-Eurasian rail and deep water port links and the vast economic potentials of Russia as well as Iran.

Russia, despite imposition of draconian new sanctions by Washington, just concluded its most successful annual St. Petersburg International Economic Summit where heads of government and industry leaders in record numbers attended to discuss economic cooperation. In the context of the SPIEF talks, as one instance, the CEO of the state Russian Railways announced Russian plans to participate in construction of the Trans-Arabian Railway that will go along the southern edge of the Persian Gulf from Kuwait to Oman. If actualized it would bring Russia, Saudi Arabia and China into closer economic relations. China has already secured some $130 billion in investment projects into Saudi Arabia and, for all his defects, it seems Prince bin Salman genuinely wants to make Saudi Arabia into a tri-continental economic hub for Afro-Eurasia.

That Russian SPIEF meeting was immediately followed by another meeting in Beijing between Putin and Xi Jinping at which the China president presented Putin with China’s highest honor to a foreigner, a golden “Medal of Friendship” declaring the Russian leader his “best, most intimate friend.” Then followed an enlarged meeting of the Shanghai Cooperation Organization in Qingdao with both Pakistan and India as full SCO members for the first time and Iran as Observer. SCO states now include Pakistan, India, Kazakhstan, Kyrgyzstan, Tajikistan, Uzbekistan, Russia and China.

At a tripartite meeting of the leaders of Russia, China and Mongolia, Putin announced plans to spend $260 million by 2020 to upgrade the Ulaanbaatar Russian−Mongolian railway and adjacent sections. He noted that volume of container traffic on the China−Mongolia−Russia route to Europe increased 2.7 times in 20127 and by four times in the first three months of this year.

This all was in sharp contrast to the clashes and tensions of the G7. As Putin noted, the G7 should “stop this creative babbling and shift to concrete issues related to real cooperation.” Putin notably expressed no interest in Russia’s being welcomed back into the G7 as Trump called for, further indication the economic and political center of gravity of the world has shifted East. 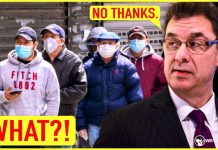