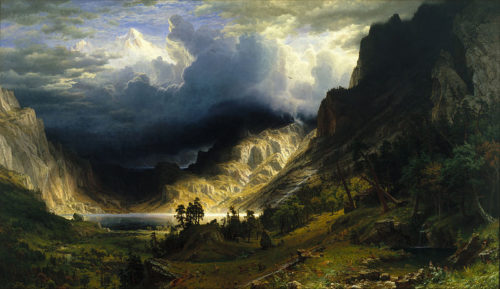 First I said I believed the US stock market would plunge in January, but I also said that January would not be the biggest drop, but just the first plunge that begins a global economic collapse: the big trouble for the economy and the stock market, I said, would show up in “early summer.” That’s when the stock market crash that began in January would take its second big leg down, and global economic cracks would become big enough that few could deny them.

(Now I’ll add a prediction — that even worse will unfold in the fall and early winter … unless summer becomes so bad that central banks rapidly reverse course on unwinding their balance sheets and raising interest; but I think they will stay their promised courses into the fall and winter and headlong into a global economic crisis.)

The stock market did plunge in January and on into February, with the Dow eventually taking its largest single-day point drop in its long history. That drop busted the Trump Rally, and the market never recovered, leaving US stocks (and stocks all over the world) shattered in “correction territory” for half a year. With a half a year for perspective now, here is a look back what that event did: 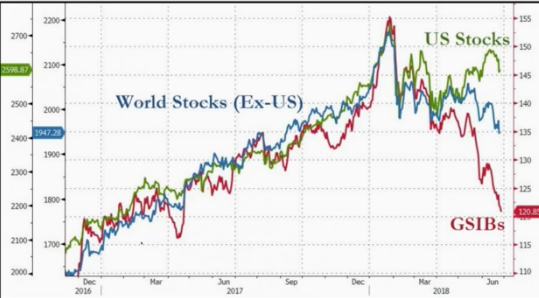 Global Stocks (except US), US stocks, and too-big-to-fail bank stocks. Where did the market trend abruptly change for all?

I’ve waited patiently through the first half of the year to talk in depth about how my January prediction faired because I felt we need many months in order to discern whether a trend has really been broken. You can see now how the steep rise in stocks at the end of 2017 turned out to be nothing but irrational exuberance that led to disaster (that, too, as I said it would prove to be at the time), which fell away as quickly as it built because it was void of substance.

You can also see that the problems that global stock markets are now experiencing did not start with the recent imposition of trade tariffs either (as the media is largely saying because they have no concept of the underlying fundamentals), though a trade war was practically assured to play a major compounding role, given President Trump’s two years of threatening a trade war (first as candidate Trump then as President Trump).

No, the event that triggered the demise of all of the world’s stock markets was exactly the one I laid out early last year. You can plainly see that the drop in all markets began the day the Federal Reserve increased its initially lax quantitative tightening program by 100%, which was at the end of January. You may also recall my writing last year that I did not think the Fed’s quantitative tightening, which was set to begin in the fall, would be enough to create much shock in the fall; but that, when the January increase came, we’d feel some real bounces in the road.

Take another look at the graph above, and you’ll also see where an even steeper break downward begins for major bank stocks — right at the end of April when the Fed implemented its next promised increase in the rate at which it is unwinding its balance sheet.

What is really happening is that, as the Fed is letting the air out of all the tires, all the stock markets in the world — since the dollar is a global currency — are becoming less stable. They are becoming less stable because it was always only central bank free-and-easy money that supported an artificial wealth effect in stocks and bonds. Therefore, as more air goes out of the fake recovery, all markets are less able to withstand the shocks in the road that hit them. The fail-safe shock absorber that “the Fed has your back” is gone.

It has been my central thesis since beginning this blog that the Fed’s recovery was a mirage that would end as soon as central-bank artificial life support is finally removed. Each time they have pulled back, we have had problems — not always as bad as I predicted along the way, but always severe and always exactly on schedule with their pullbacks. Now the Fed’s life support is being completely removed, but we do still derive some benefit from the artificial support of most of the world’s other central banks.

There was absolutely no chance that the Fed’s recovery, which did nothing to correct the serious debt-based flaws in our economy (but only exacerbated them), would prove sustainable. The idea that that you can build enduring national wealth out of the fake wealth effect from mountains of debt is laughable fantasy.

That’s why I confidently predicted last year the second big leg down for the US stock market would happen in the early summer of 2018 because the Fed will once again (in late July just before the middle of summer) increase its deflation of money supply, which has already become fairly strong. July’s 25% increase in QT is 25% of a much larger number, and that bump will hit when the world is already weak and wobbly from the previous increases. That’s when things get interesting, especially under the uncertainties that come along with a president known to be tempestuous, unpredictable and even erratic.