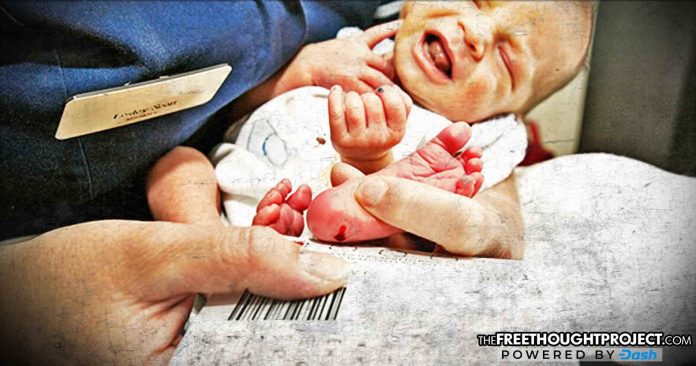 In what may seem as far-fetched as NSA whistleblower Edward Snowden’s revelation that the government is spying on all Americans, such DNA could potentially be used against children in a court of law, or be sold to potential bidders much like Planned Parenthood reportedly does with aborted baby body parts. What scientists can do with one’s DNA is limitless.

The news that California has been quietly collecting DNA since the early 80s comes on the heels of the news that the “Golden State Killer” was apprehended using DNA evidence collected through Ancestry.com. According to CBS San Francisco, few parents are fully aware of the DNA collection practice:

“State law requires that parents are informed of their right to request the child’s sample be destroyed, but the state does not confirm parents actually get that information before storing or selling their child’s DNA… most parents are not getting the required notification. We’ve also discovered the DNA may be used for more than just research.”

To answer the question of just how the state has managed to collect and log every new resident’s DNA, it is taken during a simple blood test meant to identify and potentially prevent congenital disorders called “The Newborn Genetic Screening Test.” The simplistically titled exam belies the very real practice of collecting DNA samples from every human born in the state.

Upwards of 5,000 babies benefit from the test as various life-threatening congenital conditions can be diagnosed and treated using the test and thereby saving lives. But what happens to the DNA once the congenital health of a baby is known? Few know the answer to that question and those who do aren’t talking. The report noted:

Some states destroy the blood spots after a year, 12 states store them for at least 21 years. California, however, is one of a handful of states that stores the remaining blood spots for research indefinitely in a state-run biobank.

While some states allow parents to opt-out of to the genetic blood test, California does not.

In California, however, in order to get the potentially lifesaving genetic test for your child, you have no choice but to allow the state to collect and store the remaining samples.

The DNA collection process falls under California’s “Newborn Screening Program,” and according to the program’s website, a list of rights is granted to the parents. The website claims, “You have a right to ask the Newborn Screening Program not to use or share your or your newborn’s information and/or specimen in the ways listed in this notice.” But it adds the following caveat which reads, “However, we may not be able to comply with your request.” In other words, you can ask the state not to use the DNA collected from your child’s blood test but they may not grant your request.

If genetically modified foods (GMOs) scare you, the reality that human DNA is currently being modified may be enough to keep you up at night. While modifying DNA shows promise in being able to help individuals and groups with genetic illnesses, modifying one’s DNA also runs the risk of causing unpredictable DNA mutations for the future lineage of one’s family tree.