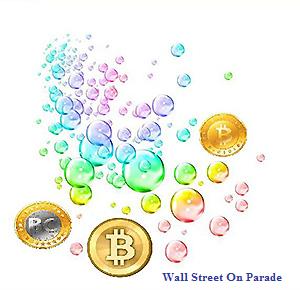 Finance Professor John Griffin and fellow researcher Amin Shams, both at the University of Texas, released a study yesterday that is causing alarm bells to ring for investors in Bitcoin and other digital currencies. Titled “Is Bitcoin Really Un-Tethered?” the researchers found strong evidence that Tether, another digital currency, is being used to artificially support the price of Bitcoin when it comes under selling pressure. Griffin and Shams found further that “Tether seems to be used both to stabilize and manipulate Bitcoin prices.”

Bitcoin soared over 1400 percent last year but has been selling off this year. It’s lost about 70 percent from the peak it set last year.

“To illustrate the potential magnitude and predictive effect of Tether issuances on Bitcoin prices, we focus on the hours with the largest lagged combined Bitcoin and Tether ?ows on the two blockchains. These 87 hours have large negative returns before the ?ows but are followed by large return reversals. These 87 events account for less than 1% of our time series (over the period from the beginning of March 2017 to the end of March 2018), yet are associated with 50% of Bitcoin’s compounded return, and 64% of the returns on six other large cryptocurrencies (Dash, Ethereum Classic, Ethereum, Litecoin, Monero, and Zcash). A bootstrap analysis with 10,000 simulations demonstrates that this behavior never occurs randomly. Consistent with Tether being used to buy Bitcoin when prices drop, we ?nd a statistically and economically strong reversal in Bitcoin prices, but only following negative returns. The Bitcoin reversal did not exist before Tether was prevalent in the market and disappears during the period when Tether stops being printed.”

According to media reports, the U.S. Department of Justice has an ongoing criminal investigation into the potential manipulation of Bitcoin and other digital currencies.

Griffin and Shams set the stage for their findings with an historic assessment of market bubbles with fraudulent underpinnings. They write:

“Innovation, excessive speculation, and dubious behavior are often closely linked. Periods of extremely rapid price increases followed by implosion, commonly known as ’bubbles’, are often associated with legitimate inventions, technologies, or opportunities. However, they can be carried to excess. Financial bubbles often coincide with the belief that a rapid gain can be obtained from simply selling the asset to another investor with a stronger belief in the underlying business fundamentals. Perhaps because of the focus on speculative activity rather than veri?able fundamentals, bubbles have historically been associated with various forms of fraud. For example, the Mississippi Bubble of 1719-1720, like the 1719-1720 South Sea Bubble, experienced in?ated valuations around subsequent issuances and margin lending on the securities themselves [Dale (2004)]. The company also engaged in false marketing about the potential in its income generating assets, price support by the stock itself, and paper money that was not fully backed by gold as claimed [Aliber and Kindleberger (2015)]…famous bubbles such as the 1840s Railroad bubble, roaring 1920s stock, the dot-com, and 2008 ?nancial crisis contained substantial evidence of misinformation, false accounting, price manipulation, collusion, and fraud, often in sophisticated forms.”

Given that background, consider what is going on right under the nose of the Securities and Exchange Commission (SEC) and the U.S. Justice Department in terms of the Dark Pools that are currently being operated by the same mega Wall Street banks that collapsed the financial system and U.S. economy in 2008 under the weight of their own greed and corruption.

Dark Pools are unregulated, quasi stock exchanges that operate in darkness inside the largest banks on Wall Street. Not only are JPMorgan Chase, Citigroup, Goldman Sachs and other Wall Street banks trading stocks in darkness, but they’re being allowed to trade the shares of their own bank in these Dark Pools, as well as that of their peer banks.

It doesn’t seem to bother the SEC or the Justice Department that these are the same banks that have repeatedly been charged with cartel activity by U.S. and foreign regulators. It also doesn’t seem to concern the SEC or Justice Department that these same banks are also allowed to issue buy ratings on the very banks they are trading in the Dark Pools, potentially being able to coordinate purchases with a new buy rating to prop up the stock price.

To pacify public demand for more clarity on what is going on in these Dark Pools, on June 2, 2014, FINRA (Wall Street’s self-regulator with a boatload of conflicts) started releasing three week old trading data from the Dark Pools. But the data is not granular; it is lumped together for the entire week. If, for example, Griffin and Shams wanted to study this data to see if Dark Pool trades were heaviest at the open or close of markets in order to manipulate prices, that’s impossible to do since there are no precise times listed. If Griffin and Shams wanted to evaluate if a Dark Pool was a big buyer of its own bank stock during a period of big price declines during a specific trading day, that also is impossible to do because of the lack of granular data.

During the week of February 5 of this year when the Dow plunged by more than 1,000 points on two separate days, we took a look at what JPMorgan Chase was doing in its own stock in its own Dark Pools. We looked at JPMorgan Chase since that is the only major U.S. bank that has pleaded guilty to three felony counts in the last four years.