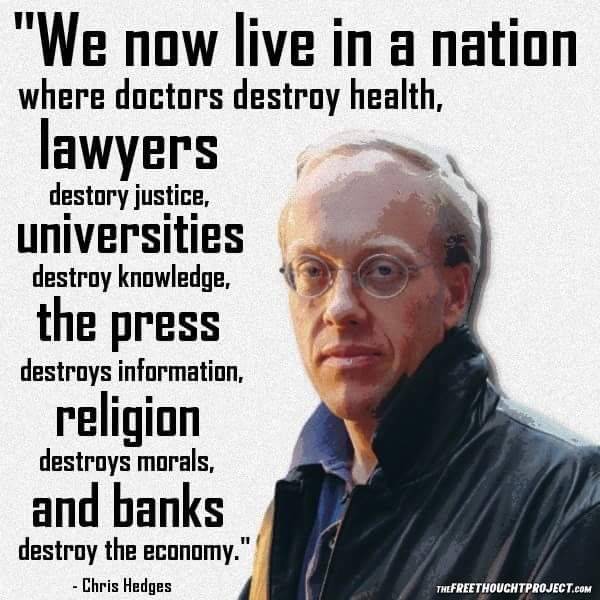 “It is impossible for any doomed population to grasp how fragile the decayed financial, social and political system is on the eve of implosion.”

The Trump administration did not rise, prima facie, like Venus on a half shell from the sea. Donald Trump is the result of a long process of political, cultural and social decay. He is a product of our failed democracy. The longer we perpetuate the fiction that we live in a functioning democracy, that Trump and the political mutations around him are somehow an aberrant deviation that can be vanquished in the next election, the more we will hurtle toward tyranny.

The problem is not Trump. It is a political system, dominated by corporate power and the mandarins of the two major political parties, in which we don’t count. We will wrest back political control by dismantling the corporate state, and this means massive and sustained civil disobedience, like that demonstrated by teachers around the country this year. If we do not stand up we will enter a new dark age.

The Democratic Party, which helped build our system of inverted totalitarianism, is once again held up by many on the left as the savior. Yet the party steadfastly refuses to address the social inequality that led to the election of Trump and the insurgency by Bernie Sanders. It is deaf, dumb and blind to the very real economic suffering that plagues over half the country. It will not fight to pay workers a living wage. 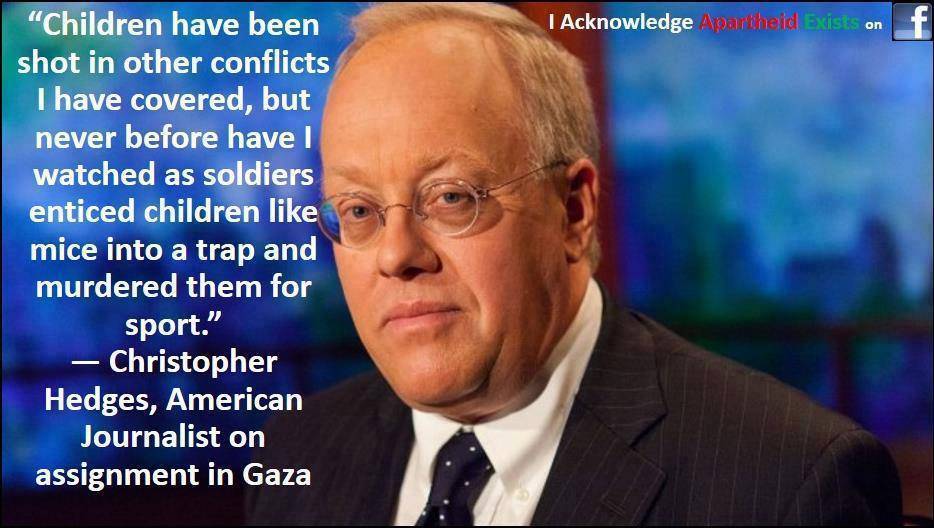 It will not defy the pharmaceutical and insurance industries to provide Medicare for all. It will not curb the voracious appetite of the military that is disemboweling the country and promoting the prosecution of futile and costly foreign wars. It will not restore our lost civil liberties, including the right to privacy, freedom from government surveillance, and due process. It will not get corporate and dark money out of politics.

It will not demilitarize our police and reform a prison system that has 25 percent of the world’s prisoners although the United States has only 5 percent of the world’s population. It plays to the margins, especially in election seasons, refusing to address substantive political and social problems and instead focusing on narrow cultural issues like gay rights, abortion and gun control in our peculiar species of anti-politics. 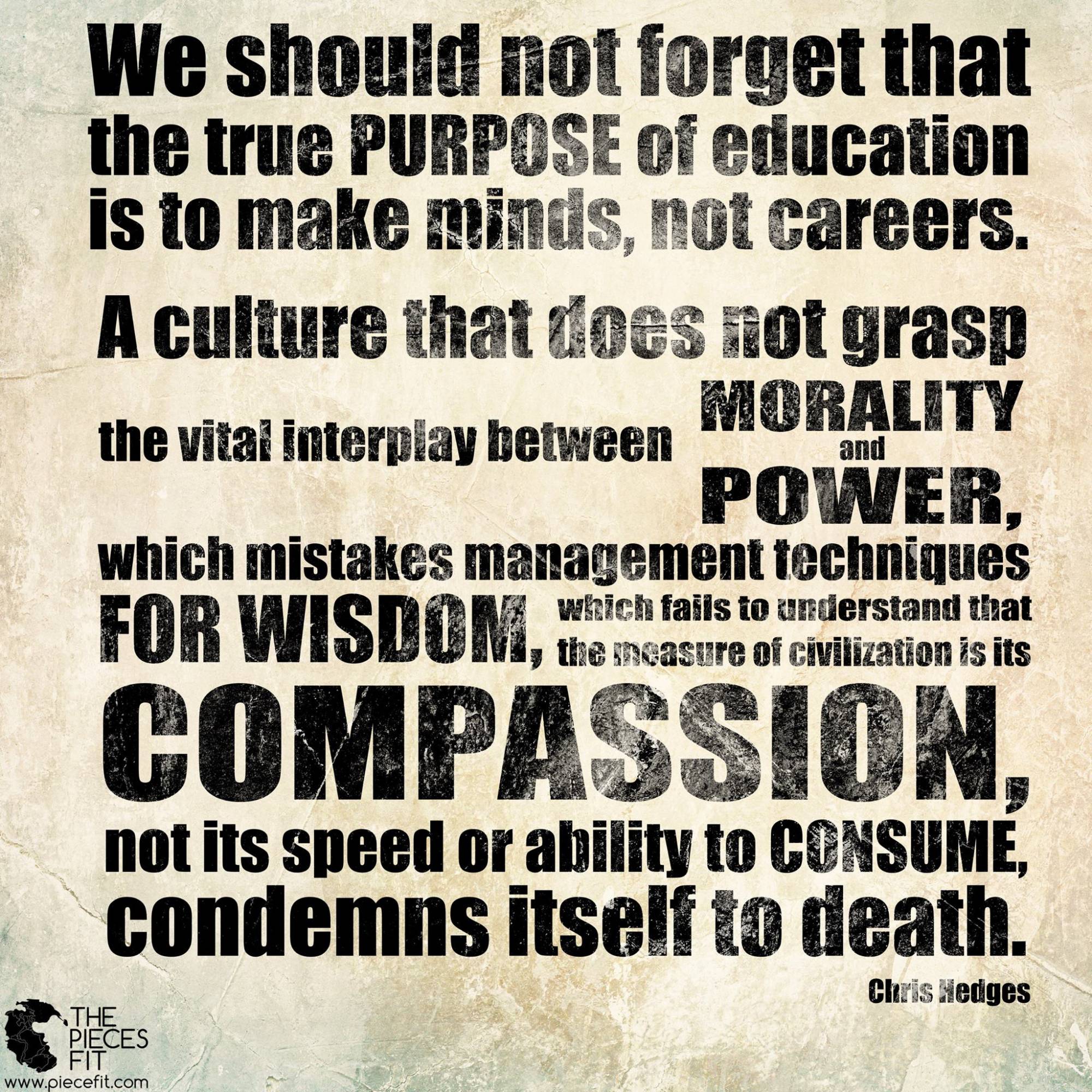 This is a doomed tactic, but one that is understandable. The leadership of the party, the Clintons, Nancy Pelosi, Chuck Schumer, Tom Perez, are creations of corporate America. In an open and democratic political process, one not dominated by party elites and corporate money, these people would not hold political power. They know this.

They would rather implode the entire system than give up their positions of privilege. And that, I fear, is what will happen. The idea that the Democratic Party is in any way a bulwark against despotism defies the last three decades of its political activity. It is the guarantor of despotism. 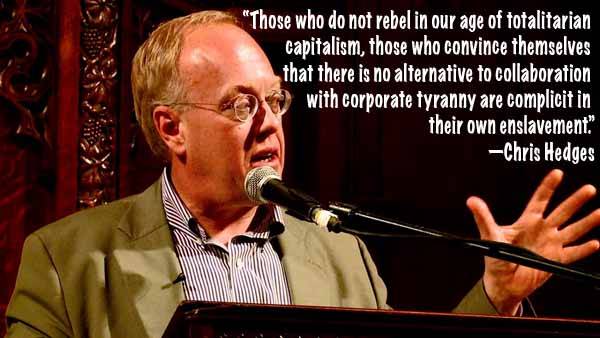 Trump has tapped into the hatred that huge segments of the American public have for a political and economic system that has betrayed them. He may be inept, degenerate, dishonest and a narcissist, but he adeptly ridicules the system they despise. His cruel and demeaning taunts directed at government agencies, laws and the established elites resonate with people for whom these agencies, laws and elites have become hostile forces. And for many who see no shift in the political landscape to alleviate their suffering, Trump’s cruelty and invective are at least cathartic.

Trump, like all despots, has no ethical core. He chooses his allies and appointees based on their personal loyalty and fawning obsequiousness to him. He will sell anyone out. He is corrupt, amassing money for himself—he made $40 million from his Washington, D.C., hotel alone last year—and his corporate allies.

He is dismantling government institutions that once provided some regulation and oversight. He is an enemy of the open society. This makes him dangerous. His turbocharged assault on the last vestiges of democratic institutions and norms means there will soon be nothing, even in name, to protect us from corporate totalitarianism.

But the warnings from the architects of our failed democracy against creeping fascism, Madeleine Albright among them, are risible. They show how disconnected the elites have become from the zeitgeist. None of these elites have credibility. They built the edifice of lies, deceit and corporate pillage that made Trump possible. And the more Trump demeans these elites, and the more they cry out like Cassandras, the more he salvages his disastrous presidency and enables the kleptocrats pillaging the country as it swiftly disintegrates.

It refuses to critique or investigate the abuses by corporate power, which has destroyed our democracy and economy and orchestrated the largest transfer of wealth upward in American history. The corporate press is a decayed relic that, in exchange for money and access, committed cultural suicide.

And when Trump attacks it over “fake news,” he expresses, once again, the deep hatred of all those the press ignores. The press worships the idol of Mammon as slavishly as Trump does. It loves the reality-show presidency. The press, especially the cable news shows, keeps the lights on and the cameras rolling so viewers will be glued to a 21st-century version of “The Cabinet of Dr. Caligari.” It is good for ratings. It is good for profits. But it accelerates the decline.

All this will soon be compounded by financial collapse. Wall Street banks have been handed $16 trillion in bailouts and other subsidies by the Federal Reserve and Congress at nearly zero percent interest since the 2008 financial collapse. They have used this money, as well as the money saved through the huge tax cuts imposed last year, to buy back their own stock, raising the compensation and bonuses of their managers and thrusting the society deeper into untenable debt peonage. Sheldon Adelson’s casino operations alone got a $670 million tax break under the 2017 legislation.

The ratio of CEO to worker pay now averages 339 to 1, with the highest gap approaching 5,000 to 1. This circular use of money to make and hoard money is what Karl Marx called “fictitious capital.” The steady increase in public debt, corporate debt, credit card debt and student loan debt will ultimately lead, as Nomi Prins writes, to “a tipping point—when money coming in to furnish that debt, or available to borrow, simply won’t cover the interest payments. Then debt bubbles will pop, beginning with higher yielding bonds.”

An economy reliant on debt for its growth causes our interest rate to jump to 28 percent when we are late on a credit card payment. It is why our wages are stagnant or have declined in real terms—if we earned a sustainable income we would not have to borrow money to survive. It is why a university education, houses, medical bills and utilities cost so much. The system is designed so we can never free ourselves from debt.

However, the next financial crash, as Prins points out in her book “Collusion: How Central Bankers Rigged the World,” won’t be like the last one. This is because, as she says, “there is no Plan B.” Interest rates can’t go any lower. There has been no growth in the real economy. The next time, there will be no way out. Once the economy crashes and the rage across the country explodes into a firestorm, the political freaks will appear, ones that will make Trump look sagacious and benign.

And so, to quote Vladimir Lenin, what must be done?