by Juliana Knot, The Burning Platform: 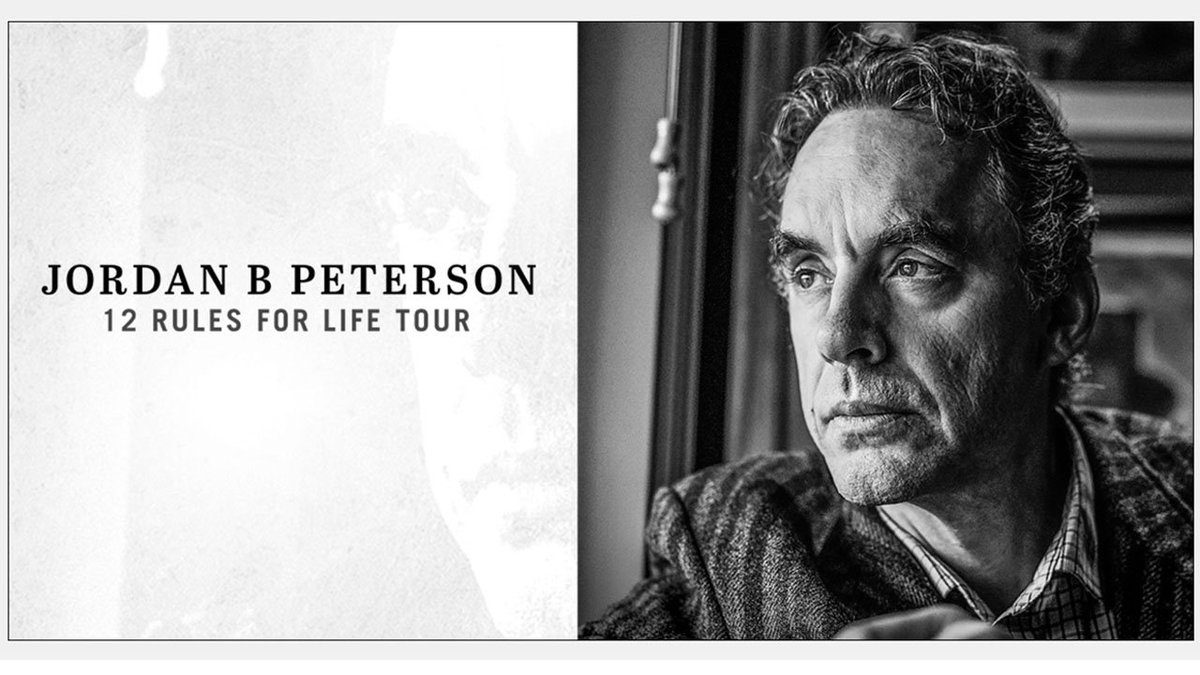 Peterson’s message is one focused on finding meaning, not fueling hate. Although it’s not a saving message, it’s one we’ll be hearing for a long time.

Renowned psychologist Dr. Jordan Peterson took the stage at the sold-out Warner Theater in Washington DC Friday night. The crowd got on its feet and started cheering, ecstatic to hear him speak.

Peterson gained fame after opposing a Canadian bill that criminalized using the wrong pronouns for transgender persons. His notoriety only grew from there after a video of his interview with British broadcaster Cathy Newman went viral. Now, he’s got a cult following who call themselves “lobsters” (in reference to an example in the viral interview) and a best-selling book titled “12 Rules for Life.”

That night, Peterson worked through only nine of the twelve rules, drawing from clinical psychology, philosophy, and common sense. Before he started walking through his rules, he talked about what motivated him.

Earlier that day, he and Dave Rubin, a YouTube personality who opened the show and appeared on The Federalist Radio Hour last week, were at the Lincoln Memorial when a young man walked up to them. This man’s brother had been going through a divorce when he started watching Peterson lectures online. The advice Peterson gave helped turn his brother’s life around. Peterson said these experiences were the highlight of what he did.

“It’s personal, not political,” he said.

It’s an important clarification, because most of the coverage of Peterson has been only the latter. He’s either a spokesman for alt-right hatred or the last defense against stifling political correctness. Yet Peterson is a clinical psychologist. According to him, his aim is to help people.

Before attending this event, I had very little knowledge of Peterson and his views. I had seen clips of his famous interview and glanced at his 12 rules, but lacked an understanding of him and his work. Here are three things I learned about Jordan Peterson after attending his show.

1. Peterson Is Not an Alt-right Demagogue
Many on the Left have criticized Peterson and his followers as disgruntled white men, hiding their pent-up racism and sexism behind pseudo-intellectual talk. A columnist from The Nation states that Peterson has a “far-right political agenda” and advises her reader to avoid dating one of his fans.

Peterson certainly doesn’t play the alt-right type by wearing a three-piece navy-blue suit and drinking Perrier. Throughout his lecture, he paced the stage, not goose-stepped, and took frequent pauses in order to word his next thought carefully. This is not the demeanor of a brazen white nationalist.

Neither was his message. He did not blame women or minorities for the problems in his followers’ lives. Rather, it actually targeted his followers themselves. Peterson asked the crowd repeatedly, “If your life is truly miserable, are you actually doing all that you can to make it better?” He also has called for people to restrain themselves from violence and focus on managing themselves rather than attempting to manipulate or bully others.

Additionally, his rules called for vulnerability and personal suffering rather than blood and soil. His first rule is probably the best example of this. It states: Stand up straight with your shoulders back. At first glance, one might pounce on this as a command to show the world who’s boss. That is not the case. Peterson told the crowd to be open to the wounds of the world, so they can experience its suffering and learn from it. His message does not seek to oppress or dehumanize. Rather, it seeks truth and meaning.

2. Peterson Can Help You Help Yourself, But Not Save You
Because Peterson is seeking out truth and meaning, he can’t avoid questions of faith. In fact, he calls the propositions on which he bases his rules “religious, because they’re about the fundamental reality of life.” His propositions are these:

2. The world’s tragedy is touched with malevolence, because humans often make their suffering worse.

3. In order to contend with this suffering, one must have a “noble goal to justify your existence, clear your conscience, and get yourself out of bed.”

Most world religions contain the first two premises in some form. Even secular humanism acknowledges that the world is a broken place. Peterson noted that “’You’re perfectly okay the way you are’ is the most pessimistic advice you can receive.” If this is the best humanity can do, we all will start staring into the abyss very soon. In fact, our society has already done a good deal of that lately.

Peterson’s third conclusion doesn’t meet his prior statement. He claims that he’s become an optimist about the human condition because he’s such a pessimist about the state of the world. “The grandeur of the human spirit” is enough to confront the worst pain that we face today, he says.

These rules can repair and improve things like mindset, work ethic, and family life, which are very important things. However, they fall short in addressing the brokenness of the human soul. That’s because, even at our best, we can’t follow Peterson’s 12 rules perfectly. Even if we could, we wouldn’t be immune to senseless tragedies like death and illness. Our hurt stretches far deeper than his moral guidelines can reach.

To be fair, I don’t think Peterson believes that his 12 rules are the cure-all for the world’s brokenness. However, for his many secular followers, this is the sole semblance of religion they have, so they are going to treat it as such.

3. Peterson Isn’t Going Anywhere Any Time Soon
Natalie Wynn, a transgender person, responded to Peterson in a NSFW video, admitting, “[People] have this need to have purpose in the face of suffering and like not just complain about patriarchy.” Peterson recognizes that it is not enough to stand against bad ideology; people also need a positive belief system.