Chicago rents collapse, New York’s swoon, Southern California’s boom. And the US average hides all the drama on the ground.

The situation with rents in the most expensive US rental markets can be summarized like this: Free-fall in Chicago, where the median asking rent for two-bedroom apartments has plunged 32% from its peak, a similar collapse in rents in Honolulu, double-digit declines from the peak in New York City and Washington DC, mixed movements in the Bay Area, a blistering boom in Southern California, and everything in between. 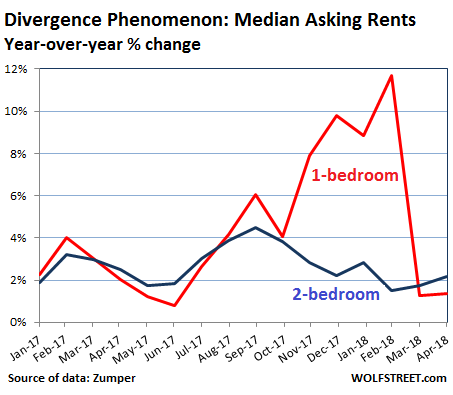 The data, provided by Zumper, is based on asking rents in multifamily apartment buildings, including new construction, as it appeared in active listings in cities across the US. Single-family houses and condos for rent are not included. Also not included are studios and units with more than two bedrooms. Zumper releases the data in its National Rent Report.

There is no shortage of apartments in San Francisco. Far from it. For example, Zillow lists 1,851 apartments for rent at the moment, up from 1,581 a month ago, and up 61% from the 1,149 listed in August 2016. This is a result of the construction boom. The City is not large, with a total of 387,000 housing units. But almost all the supply is high-end – and I mean “expensive,” not necessarily “luxurious.”

The cheapest studio with a bath (not counting rooms without bath) listed on Zillow today has a asking rent of $1,250. There are only 424 units listed with an asking rent of less than $3,000. In turn, 1,427 listings sport asking rents of $3,000 and over, with 1,281 listings wanting over $4,000 (including 3-BR and up that are not reflected in Zumper’s data). In other words, there are plenty of units for rent, but most people cannot afford them. Our local term for this phenomenon – “Housing Crisis” – describes a crisis of rent inflation. There is no crisis of availability.

These are serious declines, but they do not include incentives or “concessions,” such as “1 month free” or “2 months free,” which reduce the effective rent for the first year by 8% or 17%. Concessions have reached record levels In New York City.