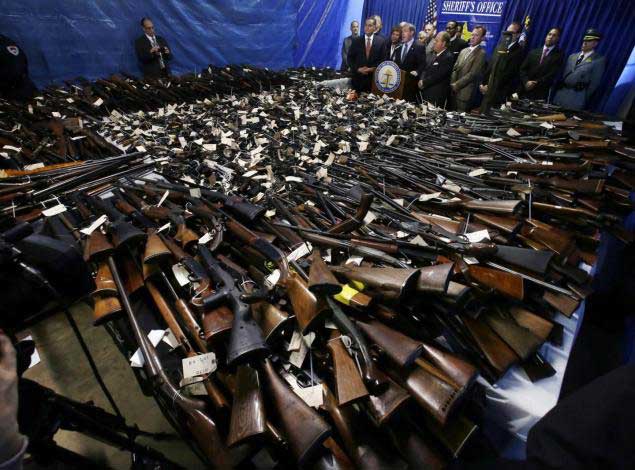 This is just one among a plethora of reasons why the UN should be abandoned by the united States. We should not keep it on life support. We should pull all our resources to it and any support for it, including housing the UN on our shores.

I’ve said it before and I’ll say it again, there is no gun control, there is only gun confiscation, and this is exactly what the United Nations is quietly advancing while other things take precedence in the news today.

The United Nations’ International Action Network on Small Arms (IANSA) is getting ready to hold their annual 2018 Global Week of Action Against Gun Violence from May 7 to May 14, 2018.

Now, part of the problem of the UN lies in the fact that anyone actually acknowledges that they have any authority over any nation to promote the restriction of the right for the people to keep and bear arms. Yet, they promote such tyranny all the time.

The “Week of Action” is no exception.

Now, this year’s theme is “End the Crisis of Gun Violence.” Consider that the UN is largely populated by Communists, Islamists and other totalitarian led countries, but the theme sounds strangely familiar, doesn’t it, David Hogg? It’s because it’s the same ideology that drives it.

According to CPNN (Culture of Peace News Network):

“Taking place one month before the Third Review Conference (RevCon3) on the UN Programme of Action to Prevent, Combat and Eradicate the Illicit Trade in Small Arms and Light Weapons in All Its Aspects (PoA), this year’s Week of Action will be an opportunity for urge governments to:

* Crack down on corruption that facilitates the illicit trade in small arms and ammunition.

Within communities, the WoA is also a chance to:

* Raise awareness of intimate partner violence and the increased dangers of having a gun in the home.

* Network with young people who are also concerned about gun violence and help amplify their voices.

* Raise awareness of the support that survivors of gun violence need.

* Bring civil society organizations together for a common goal.

* Raise awareness of the Sustainable Development Goals–particularly SDG 16.4, “significantly reduce illicit financial and arms flows”, SDG 5.2, “eliminate all forms of violence against all women and girls”, and SDG 4.A, the aim to “provide safe, non-violent, inclusive and effective learning environments for all”.

Suggested actions for the week include:

* Meeting with parliamentarians or government officials to press for concrete actions and compromises to reduce gun violence that can be reported at RevCon3;

* Engaging media outlets to ensure gun control and disarmament remain a priority in your country – linking it with the upcoming RevCon3;