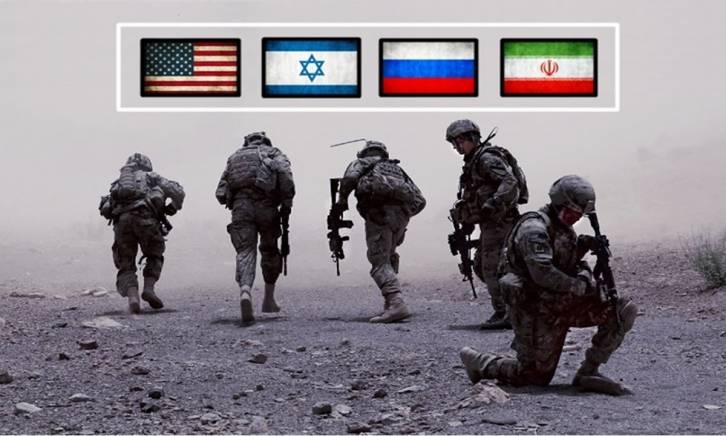 The destruction of states such as Iraq, Syria, Libya, and Iran will isolate Russia when its own turn comes

Things are escalating again in one of Syria’s many wars. On 29 April, two massive strikes – presumed to be Israeli – reportedly hit the Syrian Arab Army’s 47th Brigade military base and arms depots near Hama, as well as Nayrab Military Airport in Aleppo.

The strikes reportedly targeted Iranian surface-to-surface missiles intended for deployment in Syria, and killed between 26 and 38 people, including 11 Iranians.

The attack appears to have been coordinated with the US, coming just hours after US Secretary of State Mike Pompeo left Jerusalem – where, according to Haaretz, he had “thrilled Netanyahu with hawkish talk on Iran”. That same day, noted the Times of Israel, “news also broke of a phone call between Netanyahu and US President Donald Trump”, while Israel’s defence minister, Avigdor Liberman, was meeting his US counterpart James Mattis in Washington.

This feverish activity came less than a week after General Joseph Votel, the head of the US army’s Central Command, or Centcom, whose sphere of responsibility includes Syria and Iran, made “a largely unpublicised visit to Israel.”

The Times of Israel article concluded: “All this is beginning to look rather like a coordinated Israeli-American operation to limit Iran’s military activities in Syria – simultaneously conveying the message to Moscow that Russia’s green light for Iran to establish itself militarily in Syria is not acceptable in Jerusalem and Washington.”

The war on Iran, in other words, has begun. It has been brewing for some time.

In January 2018, with the battle against Islamic State (IS) almost won, former US secretary of state Rex Tillerson announced new goals for US troops in Syria, vowing that they would remain until “Iranian influence in Syria is diminished, and Syria’s neighbours are secure from all threats emanating from Syria.”

In February the International Crisis Group warned that Israel had “updated its red lines – signalling it would take matters into its own hands if necessary to keep Iran from establishing a permanent military presence in Syria”.