If you’ve noticed that it takes a lot more money to live the middle-class American Dream than it used to, you aren’t alone. Buying a house, saving for retirement, and putting your kids through college while living comfortably is a whole lot harder than it once was. Being part of the middle class sure isn’t what it used to be.

Despite the rosy outlook on employment numbers, things have become incredibly difficult for many families. They’re deeply in debt, living paycheck to paycheck, and without an emergency fund. Let’s take a look at what the media is saying about the middle class.

First of all, what IS “middle class”?

Once upon a time, the middle class was the largest group of Americans. Now, according to the Pew Research Group, it is closely matched by people in the low-income class and the high-income class. The image below shows the stats for 2014. 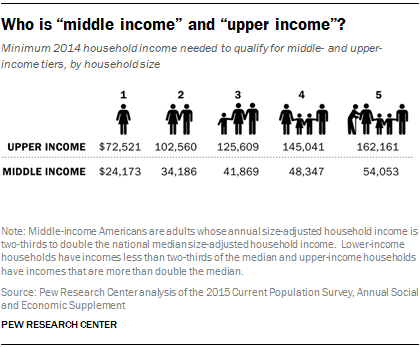 According to Quentin Fottrell, the personal finance editor for MarketWatch, “middle class” is tough to define:

There is no universal definition of the middle class. The Pew Research Center often uses the middle wealth quintile, the middle 20% of Americans’ income and wealth. Other economists have said it’s defined as making 50% above or below the median annual income. Most Americans regard a college education as a critical component to becoming middle class. Some 71% of people with a college degree consider themselves middle class versus just 58% of people with a high school diploma or less, according to a 2012 survey by Gallup. And yet college graduates in 2017 are shouldering $1.3 trillion in student debt.

Other sources cite variables like savings, net worth, debt, and spending to determine whether a family is “middle class.”

These two calculators will help you compare your income to others in your area:

The Pew Research Group Income Calculator
The CNN Money Middle-Class Calculator
For the purposes of this article, we’re going to go with Pew’s definition of the middle wealth quintile.

After more than four decades of serving as the nation’s economic majority, the American middle class is now matched in number by those in the economic tiers above and below it. In early 2015, 120.8 million adults were in middle-income households, compared with 121.3 million in lower- and upper-income households combined, a demographic shift that could signal a tipping point, according to a new Pew Research Center analysis of government data. (source)

Both of the above articles state that more people are getting pushed into the higher income class than are sliding into the lower income class, which sounds great, initially. But when you look at it more closely, those in the middle class are far less wealthy than they used to be:

…middle-income Americans have fallen further behind financially in the new century. In 2014, the median income of these households was 4% less than in 2000. Moreover, because of the housing market crisis and the Great Recession of 2007-09, their median wealth (assets minus debts) fell by 28% from 2001 to 2013…