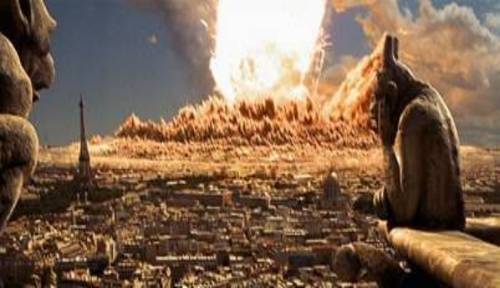 He did the same thing again in May of 1948 indicating the promises made so long ago are still in effect. God doesn’t change His mind. The “second planting” was 70 years ago May 2018.

…in both instances He declared “This is My land, I give it to thee and whosoever divides it, I will divide.” That of course is a paraphrase. But He did say it, just in different words. Here is an exact quote.

Joe 3:2 I will also gather all nations, and will bring them down into the valley of Jehoshaphat, and will plead with them there for my people and for my heritage Israel, whom they have scattered among the nations, and PARTED MY LAND.

Ever since Abram the nations have been trying to divide Israel away from the land the Almighty gave them so they can take it for themselves, but every time they try the Jews just get stronger. Israel is the linchpin of the world. God made it that way. If Israel comes apart so does mankind and those who fail to study history are doomed to repeat its mistakes. Because of God’s gift to His chosen people and because of the world’s attempt to negate those promises the world is on a collision course with a famous, climactic war called Armageddon.

Meanwhile anti-Semitism is building all over the world. Many books have been written and dozens more await publication detailing the world’s hatred of Israel because they instinctively know, even if they haven’t been told, God is working through that nation. Even Angela Merkel acknowledged that fact last week even though she is the driving force behind the forced Islamization of Europe. After a 2000 year hiatus the Jews came back to their land in May of 1948. That was seventy years ago. Seventy is the ten times multiple of the complete number, seven.

SO WHY DOES THE WORLD HATE THE JEWS?

…and through him built a nation, brought the Prophets, the Bible, Jesus Christ and salvation to all who believe. “Nobody can successfully argue with God. Instead they attack Him through His people.”

Ga 3:8 And the scripture, foreseeing that God would justify the heathen through faith, preached before the gospel unto Abraham, saying, In thee shall all nations be blessed.

“In Saudi Arabia (our now friend but still the deadly enemy of Israel) public beheadings before huge crowds, take place in “chop-chop square.” Dave Hunt says “Floggings (record 4,000 in public in Saudi Arabia), & beheading victims are taken to a public square, blindfolded, forced to kneel, and beheaded before cheering onlookers.”

“From 1948 to 1973 there were 80 revolutions in Islam, 30 of them successful. Amputation of limbs is used extensively for control, Christ says discipline, Allah says mutilate and kill.

“Muhammad married Aisha, (his son-in-law’s daughter) when she was six, consummated the marriage when she was nine and still playing with dolls.

Hunt: “This time the invasion is not only with armies but with immigrants. As avowed Muslims, building their mosques and keeping themselves aloof from neighbors through Arabic/Islamic customs and religion, this new breed knows that Islam must inevitably conquer the world. If they fail, Muhammad was a false prophet and Allah a false deity which no Muslim can admit without being marked for the death penalty prescribed for apostasy.”