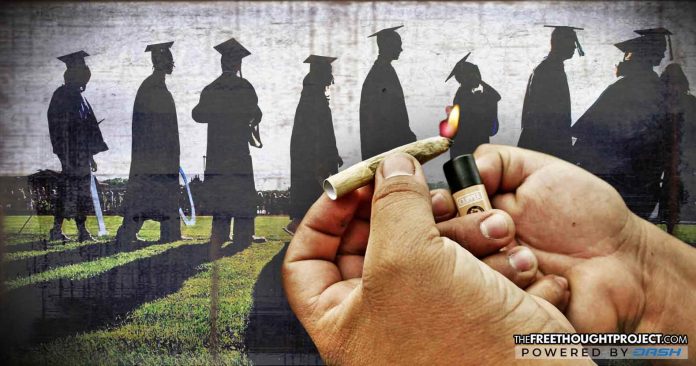 One state has ruled that college students who are medical cannabis users can no longer be labeled as felons by the state if they are caught with their medicine on campus.

The Arizona State Supreme Court ruled this week that college students who are medical marijuana users will no longer have to live in fear of being arrested and labeled as felony drug users if they are caught on campus with their medicine. The ruling also has national implications in states where cannabis is legal for medicinal use but possession on campus is not.

The fight for justice in Arizona was led by Arizona State University (ASU) student Andre Maestas. His dorm room was raided in March 2015, and .6 grams of cannabis and paraphernalia were found. Despite having an MMJ card, Maestas was charged with felony possession of marijuana.

After medical marijuana was made legal in 2010, state lawmakers decided to expand the referendum’s prohibitions in 2012 to include K-12 campuses, city buses, correctional facilities and college campuses. Maestas and his lawyer, Thomas Dean, fought the felony charges all the way to the AZ Supreme Court, which sided with the student saying that the wishes of the people of Arizona must be respected and any modification to the original medical marijuana referendum must not further prohibit citizens from access to legal weed.

According to a report from AZ Capitol Times, the unanimous ruling “paves the way for any of the state’s other more than 160,000 medical marijuana patients to have their drugs on campuses without fear of arrest and prosecution under state law.” The court acknowledged universities still have the right to refer illegal drug users for prosecution but said MMJ users (who are AZ state-issued MMJ card holders) should not be “guaranteed” to be prosecuted if found in possession of legal weed.

The Arizona ruling has national implications as well as it sets a precedent for states who may also have legal marijuana programs in place but also fear the loss of federal funding because the federal government stubbornly maintains Cannabis as a Schedule I Narcotic as classified by the Drug Enforcement Agency. According to the ruling from the Arizona Supreme Court:

Arizona State University, Northern Arizona University and The University of Arizona have all indicated that they will continue to enforce board policy and applicable federal laws.

Following the Supreme Court’s ruling, The AZ Board of Regents issued the following statement, which indicates it will continue to respect federal laws, even though it is a state institution. The statement reads:

While the Arizona Supreme Court today has ruled that medical marijuana patients are not subject to criminal arrest if they have their drug on college and university campuses, the universities and the board may enforce administrative policies prohibiting drugs on campus.

Hitting the bong, firing up a joint, or using a vape pen may be legally allowed in someone’s dorm room, but Dean warned that students with MMJ cards should not immediately assume they can get away with it. Students may still be subjected to school discipline or even expulsion from the dorms if someone such as a Resident Assistant writes them up. They simply cannot be criminally charged with felonies even if the students choose do so.

“Bottom line—it’s not a crime to possess marijuana on university campuses. It’s not a crime to consume marijuana in a dorm room… The argument is very strong that vaping is not ‘smoking’ and may, in fact, be used on the college campus. The Supreme Court struck down the statute which criminalized MMJ on university campuses, for everybody, visitors, university professors and students alike,” Dean concluded, adding that a university professor could even vape MMJ in front of the class and not be charged with a felony.