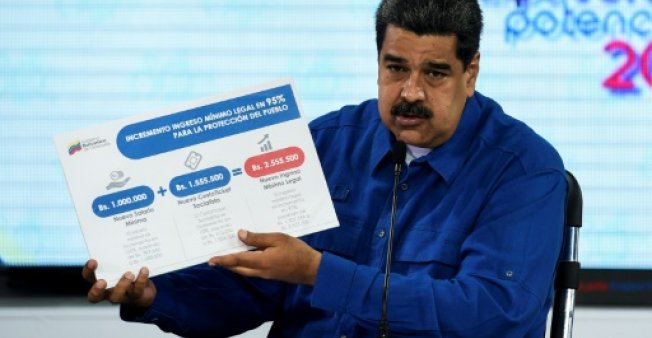 CARACAS (AFP) –
When Yolanda Abreu got her check for severance pay after five years working as a cardiologist, she let out a laugh of sheer disbelief: it was barely enough for a cup of coffee.

Like her, millions of Venezuelans have seen their salaries decimated by rampant hyperinflation that is expected to drive prices up by 13,000 percent this year, IMF figures show.

Her story hit the headlines after she tweeted a photo of the check for 156,584.29 bolivars, which equates to about $0.20 on the black market.

“They called me from Caracas University Hospital to come and collect my check for benefits accrued over five years of service as a level 2 specialist in cardiology and electrophysiology,” she wrote on Twitter.

And what will it buy, she wondered indignantly. “A coffee?”

If she had received the check when she resigned in January 2017, it would have been worth $45.

But her severance pay was decimated by the country’s chronic hyperinflation and the accelerated collapse of the bolivar.

Within a week, her indignant outburst had been retweeted 11,000 times, and commented on more than 1,400 times, with many relating similar stories or empathizing: “Friend, they robbed you blind.”

“I never thought it would have such an impact. I wrote it because the check was so ridiculous that it made me laugh, and suddenly you find so many people who feel like you that all your work, your effort is just disregarded,” she told AFP.

On the eve of International Workers Day, Venezuela’s embattled President Nicolas Maduro moved to double the monthly minimum wage, raising it by 95.4 percent to 2,555,500 bolivars — or $37 (30 euros), according to the central bank’s official DICOM rate.

But access to such a favorable rate is very limited for Venezuelan citizens and companies, meaning they have to use the black market where the same sum is worth just $3.20 — just about enough for two kilos (4.4 pounds) of chicken.

It is the 22nd such readjustment by Maduro, the self- declared “workers’ president” who took office in 2013 following the death of Hugo Chavez.

“In times of revolution, as never before, the policy of comandante Hugo Chavez, which I have perfected… is to care for the working class,” said Maduro, who will seek reelection when Venezuela goes to the polls for a controversial presidential election on May 20 — which the opposition is boycotting.

With the country facing its worst economic crisis in decades, the government has accused Washington and the opposition of waging an “economic war” on Venezuela in a bid to overthrow Maduro.

For Asdrubal Oliveros, an analyst with consultancy Ecoanalitica, the constant hiking of salaries is “a hopeless cause” in the face of such inflation without correcting the imbalances in the Venezuelan economy, which is running a fiscal deficit of an estimated 20 percent of GDP that the government is trying to resolve through printing money.

A graduate of the Central University of Venezuela — the country’s best — who went on to do specialized studies in Madrid, Abreu has borne the brunt of such a policy.

“You almost have to pay to work. It is painful to see them graduate and leave, but I understand. We are not a bunch of money-grabbing quacks, you just can’t live on these salaries,” she says.

According to a joint university study carried out with the Medical Federation, 40 percent of graduate surgeons have left Venezuela over the past decade in an exodus driven by the socioeconomic crisis.

And a study by the country’s main universities found that in 2017, some 87 percent of the people were living in poverty, despite government statistics claiming the figure stands at 23 percent.

The cost the so-called fixed basket of goods — tracked to measure the cost of living — has just soared.

When Maduro took over in 2013, it was 32.4 percent of the monthly income. Today the figure stands at around 60 percent, although that has come down from previous highs of around 70 percent.

Speaking to AFP, Marcela Maspero of the UNETE, one of Venezuela’s biggest unions, described the measure as a “delusion” because it undermines the basis for calculation of employee benefits.