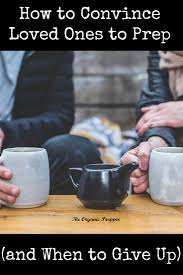 Lately, those who live the preparedness lifestyle have been more concerned than ever about the events going on in the world, and for many of us, the urgency to convince loved ones to prep is at an all-time high as worries increase. The economic collapse of Venezuela, our own shaky markets and banking system, the threat of natural disasters, and worries about cyber attacks all have the potential to become life-changing catastrophes. These are the events we prep for and we clearly understand the ramifications of facing them without the necessary supplies.

And many of us have friends and family without those necessary supplies. Raise your hand if you have ever tried to convince loved ones to prep. Yep, just as I thought. Hands everywhere.

Chances are that when you brought up the topic, your friends and family considered you anywhere on the nuts scale from “a bit eccentric” to “downright certifiable.” If you’ve ever broached the subject with them, the responses were probably one or more of the following:

“I don’t want to sit there and think about the bad things all day long.”

“You don’t need to worry about me.”

“If the disaster is that bad, hopefully, I’ll just die in it. Who’d want to live in a world after ***fill in the disaster of your choice***”

“You worry too much.”

“I’ll just come to your house.”

There’s the smug dismissal, the deer-in-headlights fear, the rolled eyes, and the outright denial that anything bad could ever happen to them. There’s the justification of “We keep a case of water in the pantry at all times” and the “I have survival skills” delusion. Most folks just don’t even want to think about it.

This viewpoint, of course, makes it very difficult for you to talk with these loved ones and bring them over to the “dark side” of preparedness with you. It’s painful to see people about whom you care, blithely going along, spending money frivolously, buying their groceries a couple of days at a time, and living in places that are totally unsustainable should disaster strike.

So, you have to try.

If you really care about the people in question, you probably feel strongly compelled to talk with them about emergency preparedness. But, how do you convince your loved ones to prep when the idea has never even crossed their minds before?

Why People Won’t Listen
First of all, it’s important to understand why your loved ones see the world through rose-colored glasses. While they are busy casting mental health disorder epithets your way, it is actually the people who refuse to accept reality who are suffering from a psychological phenomenon called “cognitive dissonance”.

The phrase “cognitive dissonance” was coined by Dr. Leon Festinger in his book When Prophecy Fails, which was originally published in 1956.When two diverse values collide – the reality of a situation and the moral belief system of the person, it causes mental discomfort that for some people is quite extreme. The person must make alterations to one or the other in order to regain his mental equilibrium. According to Dr. Festinger

Dr. Festinger’s theory states that “dissonance reduction”can be achieved in one of three ways: lowering the importance of one of the discordant factors, adding consonant elements, or changing one of the dissonant factors. This bias sheds light on otherwise puzzling, irrational, and even destructive behavior.”

This bias sheds light on why people behave in manners that are puzzling, irrational, and even destructive.

It’s very frustrating to watch otherwise intelligent people completely avoid the acceptance of our reality. Those deeply into cognitive dissonance are simply NOT going to come around by hearing you preach to them. If anything, it will only drive them further away from you. The concept of, for example, a long-term disaster like and EMP or an economic collapse followed by total social failure are incomprehensible to them.

Because of this, no matter how fervently you believe these epic events to be likely in the future, it’s best to water down the reality into manageable bites.

Breaking Them In Gently
When trying to convince loved ones to prep, it’s best to break them into the concept gently. If you go too hardcore survivalist, too doomy, or too outrageous, they’ll simply shut down, as described above, and all of your efforts will be for naught. Below, you can find a few ways to introduce the concept.

Point out weather-related events that have occurred nearby. Everyone has had an experience with the weather that inconvenienced them in some way. Because of this, it’s a disaster that seems more likely than something they’d consider far-fetched or overly dramatic. You can easily provide recent examples, like Hurricane Katrina and Superstorm Sandy. Other regions are prone to tornadoes, ice storms, snow storms, or earthquakes. For those in regions where events like this occur, you can often persuade your loved ones to stock in at least a 2 week supply. Because you can give legitimate and recent examples of these occurrences, this can be a gentle introduction to preparedness. You may be able to build on this base acceptance and begin to help your loved ones begin to extend their supplies. Note: always use mainstream sources when trying to gently nudge someone in the direction of preparedness. Those sources are familiar and to most people, thought to be more accurate and reliable.