How many of you were wondering, as I was, what the suddenly former New York Attorney General, Mr. Schneiderman, might have looked like in a leather bondage get-up with a ball-gag stuffed in his pie-hole? Not the preferred courtroom attire, of course, and a less appetizing image of justice than, say, a blindfolded, half-naked lady holding a sword in one hand and a scale in the other. But that’s how our boy rolled, even while heaping censorious opprobrium (and indictments!) on other big shot alpha dogs for defiling the honor of women.

I sense that with Schneiderman we’ve reached the zenith in this comic phase of American cultural collapse. The same week, Vanity Fair Magazine ran this item about the pop star Rihanna:

Rihanna’s lingerie collection will drop on Friday [today], and there’s one very special addition that is making people lose their minds: her line, Savage x Fenty, will feature handcuffs. [Fenty is Ms. Rihanna’s surname.] Just days after she reimagined the Pope at the Met Gala, Rihanna is reminding us that this is still her week. She told Vogue that it was only natural that Fenty Beauty, which launched last fall, feature a lingerie line for women who want to express agency over their own looks and bodies…. ‘Women should be wearing lingerie for their damn selves,’ Rihanna [told Vogue]. I want people to wear Savage x Fenty and think, I’m a bad bitch.’”

Well, handcuffs are fashion accessories for entering prison… and the Marquis deSade did pen much of his personal philosophy in prison… and the women’s penitentiaries are full of bad bitches… so therefore let America celebrate incarceration and sadism! And especially women expressing their personal agency by advertising themselves as… evil? Apparently, a fellow such as Mr. Schneiderman, an avatar of justice, would wish to strike a blow against evil. Thus, beset by one bad bitch after another, he laid the blows of righteous judgment upon the women in his life…! Or something like that.

Forgive me here. I’m trying to imagine how the proverbial Man From Mars might interpret doings in America these days from reading our popular press. Frankly, the part I like best is “reimagining the Pope,” as though it was a great feat of innovation, akin to one of the triumphs of Elon Musk, or Innocent III’s rewrite of canon law — when it was just an act of dress-up. The Met Gala, by the way, an annual costume party thrown by New York’s Metropolitan Museum of Art, proclaimed its theme this year as “Heavenly Bodies: Fashion and the Catholic Imagination” — an invitation, if there ever was one, to mingle the sacred and the profane. 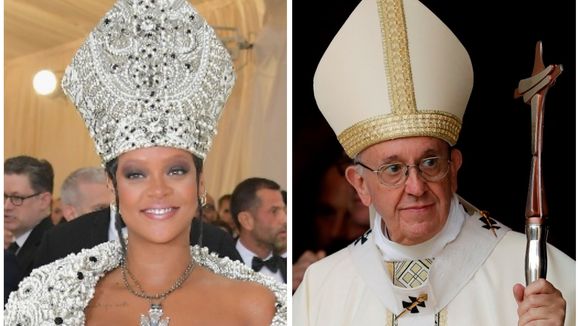 The Martian in me sees America turning into something like a Fellini movie, a panorama of fabulous excess and sinister fantasy, with the more malign forces of commerce propelling the garbage barge to ever darker extremes at the edge of a flat earth. On one part of the edge stands President Trump, all greatness and little goodness; and on the other edge stand characters like Eric Schneiderman and Harvey Weinstein, deposed champions of social justice — now cultural blood-brothers in the Sexual Predators Hall of Infamy. Mr. Schneiderman was all set to drag Mr. Weinstein, figuratively speaking, over several miles of broken glass and old Gillette blue blades in the state courts, and now it looks like the former NY AG himself may submit to a death of a thousand cuts by civil litigation, or maybe even a trip to one of his old criminal courtrooms, if the ever-vengeful Governor Andrew Cuomo has his wicked way.