The stunning process which has become most visible in Korea over the past days—and how many were there who expected this even just weeks ago?—is still far from the complete victory for which we are fighting. So far, it is still only an embattled outpost. The British-led attack on Syria two weeks ago was aimed to prevent this progress; it damaged it severely, and next time, if we permit a next time, can be much more harmful.

But even as an embattled outpost, the hope which the Korea talks represent, has nevertheless swept the world with its inspiration. It was perfectly natural that the thousands of supporters at President Trump’s Michigan rally on April 28 began to chant “No-bel,” “No-bel!” when he mentioned Korea. Regardless of party or faction, there is no one with any shred of understanding and morality, who can fail to find some degree of inspiration from Korea today. Recall that the state of declared hostilities on the Korean Peninsula has existed ever since 1950, when the world’s population was only 2.5 billion, as against 7.6 billion today. And only about 7% of those alive today, had even been born when that never-ending war began. And that the Korean War inaugurated that Cold War which dominated the remainder of the terrible 20th Century. Equally today, the frozen Korea conflict still underpins the British Imperial system of pitting each against all to sustain its world rule.

What is now first unfolding in Korea has been made possible by the joint and coordinated work of China, Japan, Russia and the United States with the two Koreas. What has finally permitted this, is that China, Japan, Russia and the United States have all undergone profound changes over the recent decades, which only now made this form of cooperation possible today, where it had never been possible before. What caused these changes? The new policies of Presidents Xi, Putin, and Trump, and Prime Minister Abe? Yes, but what was in common to all of them?

There is a spiritual factor. As Douglas MacArthur wisely said aboard the battleship Missouri in Tokyo Bay, “It must be of the spirit if we are to save the flesh.” Lyndon LaRouche referenced this in his seminal 2004 work, “The Coming Eurasian World,” where he wrote, “What occurs, as I have seen thus often, even at close quarters, in the course of my lifetime, the evolution of the collective mind of an entire culture, is driven by the spark of the interventions into the entire society, through the veil of ambiguity, by a relatively few geniuses, and by those young people who replicate experience of discovery by geniuses in their own early self-development through young adulthood.” 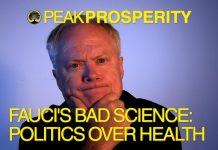 Fauci Places Politics Over Science (and your health)