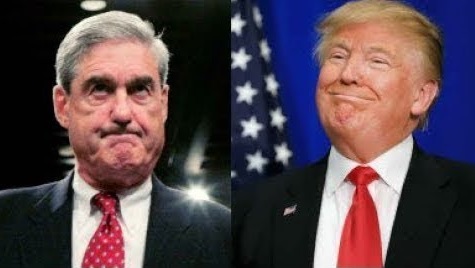 Having failed to indict even one American with actual collusion with Russia in regards to the 2016 presidential election, with others charged on a variety of issues that had nothing to do with the original Special Counsel mandate of probing collusion between the Trump campaign and Russia to sway a presidential election, Team Mueller decided to indict 13 Russian individual and three Russian companies, in what many thought was an attempt to justify the millions in taxpayer money the special counsel has spent to date.

The reason many speculated that it was nothing more than “show” to indict 13 Russian companies and three Russian individuals is because, as legal experts highlighted at the time, none of the individual or entities were subject to U.S. law, or our court systems, so to Robert Mueller and his “dream team,” it was a slam dunk, indict them, slap the notches on the bedpost, so to speak, and call it a day…..until one of the Russian companies, Concord Management and Consulting, LLC, decide to hire two Washington based lawyers, and have team Mueller put up (try the case) or shut up (drop the charges.)

Many of what the media originally called Robert Mueller’s “dream team,” has been reassigned, demoted or otherwise removed, due misconduct and/or scandals, but one of those left, Jeannie Rhee, who formerly represented a top Obama aide and the Clinton Foundation, is representing the special counsel in the case. It immediately went downhill for them in the initial hearing after Rhee filed a motion to delay the proceedings, claiming the defendants had not been properly served. Many legal experts that have weighed in speculated the special counsel was unprepared to have to actually prosecute the case, not expecting Russia to hire lawyers to fight the charges.

The Washington based lawyers representing Concord Management, Eric Dubelier and Kate Seikaly, showed up in court to argue against the delay, indicating they were prepared to go to trial, would be asking for discovery and also indicated they would be asserting their speedy trial rights. The judge sided with Concord’s lawyers and denied Rhee’s motion to delay. (More on that along with the court transcript in a previous ANP article here)

The initial hearing was set for May 9, 2018. As expected the lawyers for Concord put in a not guilty plea, and they asserted their speedy trial rights, but within that short hearing, the court asked the lawyers for Concord if they were also representing one of the other entities that Mueller indicted, Concord Catering. The defense attorney said no, because the “company didn’t exist as a legal entity during the time period alleged” by the Mueller’s prosecutor Rhee.

The lawyer indicated to the judge that team Mueller had “indicted the proverbial ham sandwich,” meaning they charged a company that didn’t even exist when the crimes were allegedly committed. (Transcript here)

On May 16, 2018, the parties were back in front of the judge again, and this time, according to the portions of the transcripts that have been released, the defense claims the Mueller team 1) Named employees of Concord management that do not even work for the company; 2) Was prepared to hand over between 1.5 and 2 terabytes of data, claiming it covers “hundreds of facilities,” and 3) Allegedly admitted that those “facilities” were actually social media accounts, and the posts were all in Russia, to which the special counsel had not even translated. 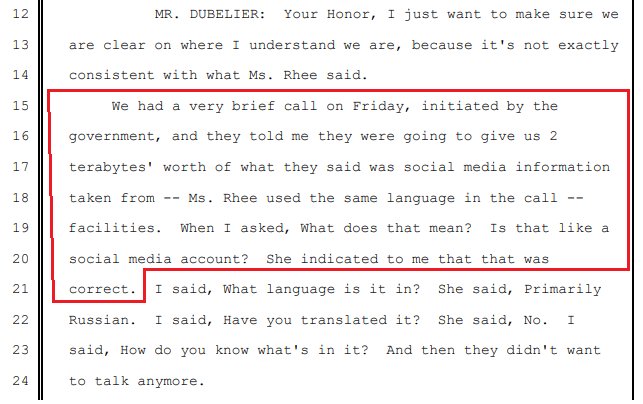 That brings up two very obvious questions. One: How does the special counsel know these posts are in any way relevant to meddling in a U.S. election if they haven’t even translated them yet? Two: If the posts are in Russian, how can they claim they swayed any Americans, especially those that do not speak Russian?

The fireworks at Wednesday’s hearing came after one of those defense lawyers, Eric Dubelier, complained to Friedrich that the government hadn’t responded to or even acknowledged more than 70 discovery requests he made last month. Instead, prosecutors have offered a massive quantity of social media data from accounts that were allegedly set up under fake identities for the purpose of influencing American politics.

“We had a very brief call on Friday initiated by the government,” Dubelier said. He said prosecutors told him much of the information was in Russian, but they had no translations. “I said, ‘How do you know what’s in it?’”

“I anticipate we are going to get this massive dump of social media accounts in Russian. This is an American court,” the defense attorney added. “That’s not what we’ve asked for. What I’d like to get is information that actually helps us defend our client.”