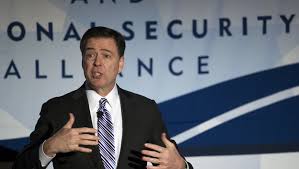 When the fired FBI Chief asked for questions Laura Loomer stood up and asked him why he lied under oath and hid information from President-elect Donald Trump that Hillary Clinton paid for the debunked Steele Fusion dossier.

“Why didn’t you disclose to President Trump that his opposition paid for the dossier?” Loomer asked Comey as people began to boo loudly.

“You are not an ethical leader!” Loomer exclaimed.

Even though Comey’s sycophants were trying to silence Laura Loomer, she continued to blast Comey.

Loomer was referring to the letter Rep. Ron DeSantis and 10 other lawmakers sent to the DOJ Wednesday, criminally referring Comey, Hillary Clinton, McCabe and Loretta Lynch for their investigations into Trump.

Laura finished her questioning with, “You’re going to Jail!”

Security personnel quickly moved in and proceeded to escort Laura Loomer out of Barnes & Noble.

Another angle of the video…look at Comey’s reaction!