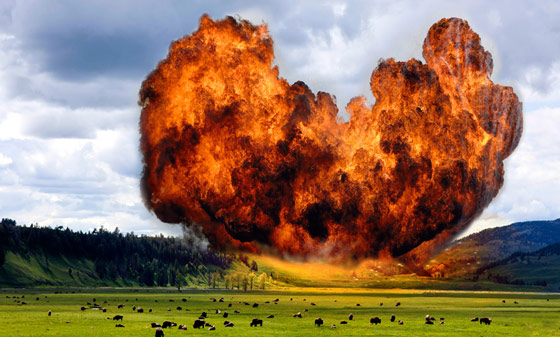 Underneath the quiet nature preserve of Yellowstone lies the most powerful and largest supervolcano on the planet. The fear of it erupting in our lifetime has put many on high alert, and recently, the Steamboat Geyser of Yellowstone gave another indication that the area is under strain.

‘More than 20 police, fire, and rescue vehicles descended upon the area around Yellowstone supervolcano this week to prepare for what could be a “life or death” emergency. Earlier this week, it was reported that there were a series of eruptions at the Steamboat Geyser, the worlds tallest and active geyser and they are expecting more minor eruptions to come.

Yellowstone National Park Public Affairs confirmed that there could be a supervolcano eruption imminently – and that they were putting themselves through their paces so that they were ready for any eventuality.’

Seismologists who have monitored the area have warned for years that the area is under strain and have observed deformation in rocks occurring under Yellowstone. This deformation causes a change in pressure and magma underneath the surface.

In fact, last month, the same geyser produced similar activity giving cause for concern. Dr. Wendy Stovall, the deputy scientist in charge at the Yellowstone Volcano Observatory, a branch of the United States Geological Survey, said, “There is a lot of seismicity, or earthquake activity, and deformation around the geyser basin.” She also said, there is no cause for concern at this time. “Volcanoes all over the world have hydrothermal systems. “Because all the water goes away from the heat coming up. As long as there’s water and the geysers and hot springs and mud pots are still boiling, everything is fine.”

That said, Yellowstone National Park Public Affairs are not wasting any time and have begun preparations and training exercises. In fact, the emergency services associated with the National Park are discreetly performing training exercises to minimize local disturbances and to ensure that if the volcano erupts, they will be able to act decisively.

What Would Happen if the Yellowstone Supervolcano Erupted?
An eruption would have 2,500 times the force of Mt. Saint Helens in 1980.
Would be larger than any nuclear bomb ever tested.
The eruption would blast 240 cubic miles of rock, dust and volcanic ash into the sky. This would spread throughout the world and lower global temperatures by up to 28 degrees for years.
620 cubic miles of lava would flow out of the volcano. This is equivalent to coating the entire United States in 5 inches of lava.
States surrounding Yellowstone would be wiped off the map (Idaho, Montana, North Dakota, South Dakota, Nebraska, Colorado, and Utah).

Moreover, the amount of ash dispersed from the eruption could be so great that it could literally crush buildings, foul water supplies, clog electronics, ground airplanes, and irritate lungs. If that wasn’t enough to be bothersome, the toxic gases and chemicals would enter our atmosphere and cause toxic rain thus killing more humans, animals, and plants.