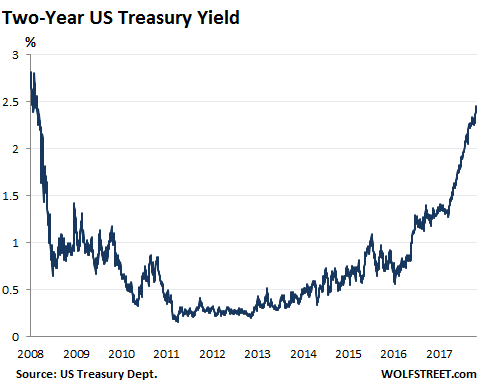 The Fed’s new paradigm.
The three-month Treasury yield closed at 1.81% on Friday. It has been at about this level since before the Fed’s March 21 meeting, when it hiked its target range for the federal funds rate to 1.50%-1.75%. In other words, the three-month yield had been trading above the upper limit of the Fed’s range even before it was announced. So the rate hike was fully priced in, plus some, in preparation for another rate hike in June. This is up from 0% in 2015 when lots of folks said that the Fed could never raise interest rates again.

As bond yields rise, bond prices fall by definition. So a rising-yield environment can be tough on holders of bonds with longer maturities. 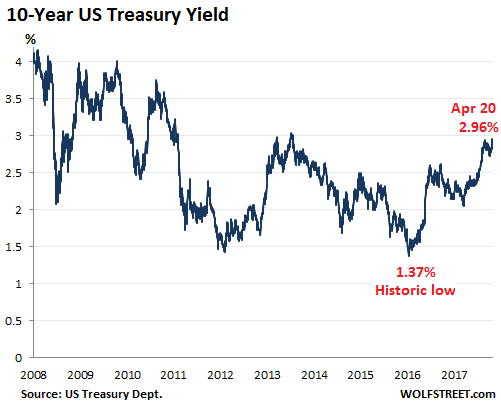 In mid-February, as the 10-year yield was soaring and threatened to take out the 3% level, I speculated that it would run into a wall over the near term, for two reasons: Enormous demand at the 3% level, and record short positions by hedge funds against the 10-year Treasury. This begged for a contrarian rally, or even a short squeeze. While the ensuing rally wasn’t exactly spectacular, it pushed the yield down to 2.73% by early April. But since then, the 10-year has sold off again. Now with the yield at 2.96%, it might try to make another run at breaking 3%.

It might not succeed this time. But it will succeed sooner rather than later. Of note, the two-year yield has not yet run into this kind of wall of resistance as of yet.

Jordan Sather – The War Is Real, The News Is Fake, Optics Are Important, Information War