As cringe-worthy as Mark Zuckerberg’s water-sipping testimony was last week on Capitol Hill, nothing can top how uncomfortably ignorant those parasitical politicians revealed themselves to be about… well, the internet.

The whole damn hearing was a charade proving exactly why the State is utterly incapable of effectively regulating private industries, for better or worse.

Take this exchange between Mark and some clueless, irrelevant Senator:

In a separate exchange, another professional thief asked Zucc if “emails sent through WhatsApp” can be intercepted through Facebook. Really?

And these are the morons, incompetent as they may be, grandstanding about saving us from… from this guy:

After two days of grilling, what were we left with? A bunch of awkward new Zuckerberg GIFs and some viral clips for Senators to pin on their own social media.While hypocritical State officials may preach and lecture on the evils of Facebook’s privacy standards, the fact is the NSA continues collecting data from across the internet, and no one ever signed up for an NSA account.
It was like a scene straight out of Atlas Shrugged. And while Zuckerberg is no saint (perhaps not even a human), at least he’s an expert in an industry these political hacks can only pretend to know anything about.

The new statist fad and rallying cry is to start ramping up regulations on Facebook—all to be overseen by an army of unaccountable and corrupt technocrats that can barely operate a smartphone.

Technology is only going to advance more rapidly in the most disruptive, revolutionary ways. Soon, it’ll be happening so fast, lawmakers’ heads will spin–if they aren’t already. 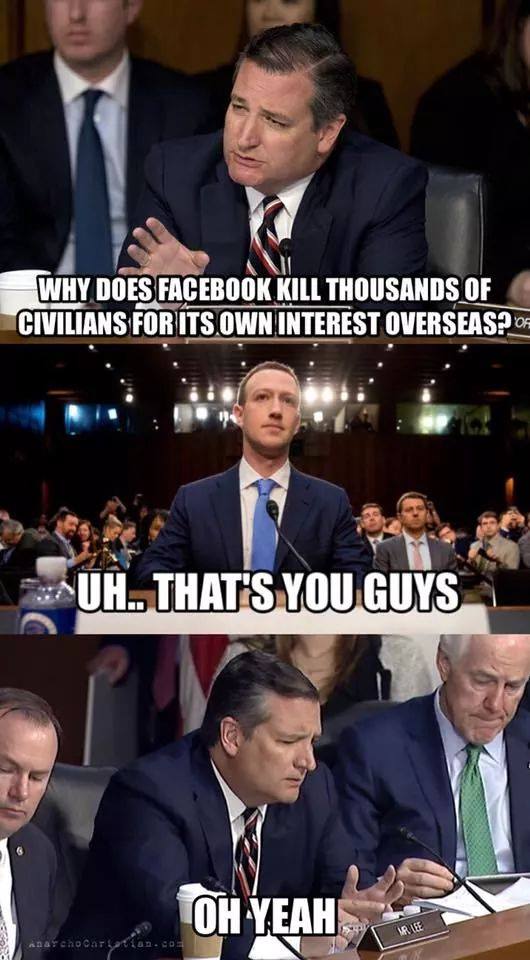 My hope is that technology will soon make governments obsolete–cryptocurrency is already doing this (and of course they want to start regulating that, too).

In many ways, the world is evolving too fast now for archaic government systems to catch up. We here at TDV have been ahead of the curve, equipping subscribers with essential knowledge on burgeoning trends like Bitcoin, gold, and much more (subscribe HERE).

New services like Steemit and DTube are far better alternatives for social media than their mainstream counterparts, and even Zuckerberg understands what we’ve been saying about the destabilizing power of decentralized tech. Just look at what he said about crypto:

There are important counter-trends to this — like encryption and cryptocurrency — that take power from centralized systems and put it back into people’s hands. But they come with the risk of being harder to control.