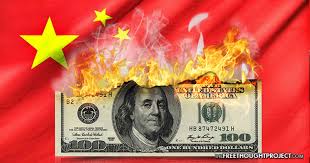 Just days after Beijing officially launched Yuan-denominated crude oil futures (with a bang, as shown in the chart below, surpassing Brent trading volume) which are expected to quickly become the third global price benchmark along Brent and WTI, China took the next major step in the challenging the Dollar’s supremacy as global reserve currency (and internationalizing the Yuan) when on Thursday Reuters reported that China took the first steps to paying for crude oil imports in its own currency instead of the US Dollars.

A pilot program for yuan payment could be launched as soon as the second half of the year and regulators have already asked some financial institutions to “prepare for pricing crude imports in the yuan,” Reuters sources reveal.

According to the proposed plan, Beijing would start with purchases from Russia and Angola, two nations which, like China, are keen to break the dollar’s global dominance. They are also two of the top suppliers of crude oil to China, along with Saudi Arabia.

A change in the default crude oil transactional currency – which for decades has been the “Petrodollar”, blessing the US with global reserve currency status – would have monumental consequences for capital allocations and trade flows, not to mention geopolitics: as Reuters notes, a shift in just a small part of global oil trade into the yuan is potentially huge. “Oil is the world’s most traded commodity, with an annual trade value of around $14 trillion, roughly equivalent to China’s gross domestic product last year.” Currently, virtually all global crude oil trading is in dollars, barring an estimated 1 per cent in other currencies. This is the basis of US dominance in the world economy.

However, as shown in the chart below which follows the first few days of Chinese oil futures trading, this status quo may be changing fast.