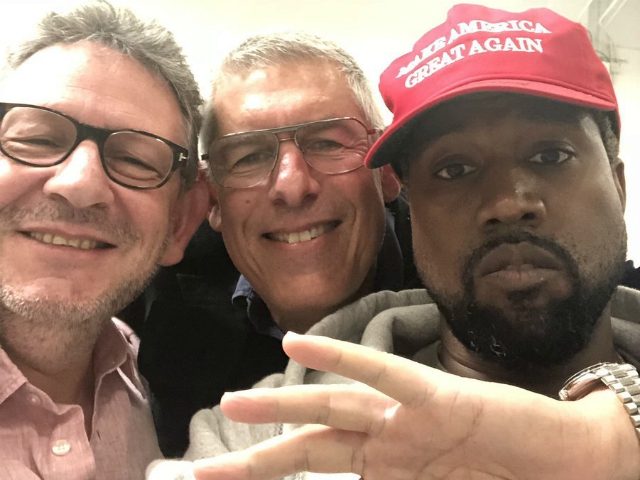 For the record I have never quoted Kim Kardashian ever. I have never even clicked on any of her social media accounts or watched their television shows, until she tweeted the following question to her nearly 60 million followers as part of a series of tweets defending her husband’s basic right to his own opinion, because it was a watershed moment.

“He’s a free thinker, is that not allowed in America?”

It appears not Ms. Kardashian-West, not unless you stay in the box they put you in and don’t step out of it.

Her defense of her husband, Kanye West, stemmed from his statements over the course of the week where he complimented TPUSA Director and conservative Candace Owens, described President Trump as his brother, tweeted images of himself wearing a MAGA hat, and generally caused a meltdown from liberal celebrities and other liberal musicians and Democrats across the spectrum by telling them that to be black doesn’t mean they must be a Democratic liberals.

ATTACKED FOR STEPPING OUT OF THE BOX

Welcome to the world of conservatives Ms. Kardashian-West, despite your liberal leanings, you and your whole family are discovering what conservatives go through every single day across the internet, on social media platforms, and from big tech.

On April 24, I wrote a piece titled “seven words that broke the internet,” where I said “Something very important is happening right now as we are witnessing a movement in its beginning stages as high profile African American personalities are fighting back against the BLM, liberal “victimhood” mentality that has enslaved generations of blacks across America.”

That movement has not only continued, but grown exponentially, in the last two days as West has doubled down on his initial commentary and informed the vile and vicious left attacking him for his beliefs that the “the mob can’t make me not love him,” meaning President Trump. While multiple other celebrities are busy criticizing West, he has empowered others to stand up and speak out as he is doing, such as “Chance the Rapper” who informed his seven million-plus followers that “Black people don’t have to be democrats,” which was liked over 269 thousand times and retweeted over 68 thousand times.

Of course liberal celebrities attacked hard and fast, calling him a lunatic and other names I won’t say here, and his colleagues decided he needed private intervention so they approached him with direct messages, meant to remain private, until West decided to screen capture them and show his nearly 28 million followers how those colleagues were trying to manipulate him.

The one below is from singer and song writer John Legend, with West’s response:

The powers that be at Twitter “coincidentally” seemed to suffer a major glitch and managed to remove 9 million of West’s followers, and when they were called out over it, they claimed it was “an inconsistency and should be resolved soon,” which it was as his follower count immediately jumped back to 27.9 million. Amazing that this seemed to happen in the midst of his informing his followers that they should be thinking for themselves and not allow the liberal mindset to enslave them, telling them to break out of the “mental prison,” and other ideological statements that generally are censored by Twitter.

When the Twitter mob and Hollywood celebrities and fellow musicians couldn’t get West to stop publicly showing support for President Trump and telling his followers to think for themselves, the media jumped in to save its democratic base and started questioning his mental health, calling his behavior “erratic,” claiming his wife, Kim was trying to get him under control, and a whole host of other tactics to discredit him.

he Ms. Kardashian-West called them out as well, calling their behavior “scary.” 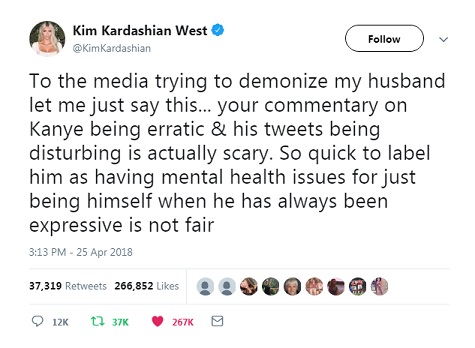 She ended her series of statements about the media and those attacking her husband by saying “Mental Health is no joke and the media needs to stop spitting that out so casually. Bottom line.”

Last but definitely not least, she called out a specific article that misrepresented her playfulness, via Twitter, with her husband, when they claimed she “scolded” Kanye for sharing images of their home and referring to his statements as a “bizarre tirade,” by telling them “Oh RELAX I’m joking! Seriously you can’t have a personality on social media these days or your called bizarre or disturbing.”

If the media is the “big guns” for the Democrats, well the Kardashian’s pulled out their bigger gun….. Mom, Kris Jenner, who has a reputation as formidable and that is putting it mildly, so she jumped in as well, by calling out multiple stories being written about Kanye West, one she just responded with three words: “Lies,Lies,Lies,” while linking to a promotion of an article that stated “Kanye West Has Had ‘Explosive’ Fights with Kris Jenner & Kim Kardashian Can’t ‘Control’ Him: Sources.”

Then she called out another promo, titled “Kanye West ‘Seems to Be on the Edge’ and ‘Is Very Hard to Deal with Right Now’: Sources,” by saying “Nope…not true!” The last People article claimed “Kanye West Posts Photos Inside $20M House As Kim Responds: ‘We Had a Rule to Not Show Our Home’,” to which Mama bear tweeted “WOW wrong again!!!!! Their house is $60 MIL.”