Amazon, by all definitions is the poster child for crony-capitalism, corporatism, and corruption, but because Trump picked a fight with Jeff Bezos, the mainstream left has embraced their antithesis.

Over the last two weeks, Donald Trump has made it his personal mission to suddenly call out the corruption involving Jeff Bezos and the United States government. Exactly why the president decided to get in a pissing match with one of the most powerful, rich, and sinister men in the history of the world remains unclear. However, it did shed some much needed light on the corruption and corporatism surrounding Amazon and Bezos.

One would think that exposing a billion dollar monopoly and its special privileges granted to it by the government which create unfair advantages would be a welcomed notion, especially for the left who is ostensibly opposed to such corruption. However, one would be wrong.

Thanks to the mind-controlling power of the two-party paradigm, corruption, illegal business practices, and state-granted monopolies can be entirely ignored and dismissed even though there is overwhelming evidence exposing it.

It is no secret that Amazon has reached its monopoly-esque status because of its cozy relationship with the United States government. Because Amazon receives special privileges that are not available to all business owners, they have an unfair advantage in the market which allows them to easily snub out their competition who is forced to abide by the rules. Although the left is opposed to such corruption, because Donald Trump made Bezos his enemy, they are now embracing it.

As Trump pointed out, albeit incorrectly, Amazon receives massive subsidies from the United State Postal Service. As a recent analysis from Citigroup points out, this deal with the USPS allows Amazon to deliver packages far cheaper than anyone else and at a loss for the post office.

According to the report, on average, parcels would cost $1.46 more to deliver without this subsidy. Given the millions of Amazon packages delivered in the US on a weekly basis, one does not need to do the exact math to realize the unfair advantage this relationship gives Amazon. What’s more, the true sinister nature of this deal may never be realized as the exact details remain a secret.

But that’s not all. Amazon uses government welfare to subsidize the pay of more than ten percent of their employees. A study by Policy Matters Ohio found that more than 700 Amazon employees receive food stamps. This is more than 10 percent of the tech giant’s 6,000-strong workforce in Ohio alone. This same tactic is used by Walmart as a means of saving billions in revenue by limiting hours and pay of employees and when Walmart did it, the left was against it. But it appears to be acceptable now.

Amazon has insidious relationships with state governments too. According to Good Jobs First, a non-profit that tracks state tax breaks, since 2000 Amazon has received $1.115 billion in 129 communities in the U.S., leaving the previous leader in this category, Walmart, in the dust.

Amazon has an entire department devoted to seeking out these government subsidies and under the guise of “creating jobs” — subsidized by your tax dollars via welfare — the retail behemoth has managed to make itself immune from property taxes as well: to the tune of hundreds of millions of dollars.

Bezos is currently worth around 120.5 billion dollars. If he took a tiny pay cut and knocked his net worth down to a measly 120 billion, none of his workers would need to be on welfare. But why would he do that when he can use your tax dollars to subsidize his workforce and keep thousands of employees in a constant state of poverty?

Bezos is the definition of corporatism and crony-capitalism and prior to this recent feud with Trump, the left would decry such practices. However, because their political “enemy” has brought some of this corruption to light, the left is not only ignoring it, they are defending it.

Because Amazon is being exposed by the puppet on the right, the left is defending it — because they are supposed to. In the football game that is the US political system, citizens only care if their team is winning–not how they play the game.

This ‘owner’ of the teams is not a single person, nor a single corporation, or focus group, or think tank. As Bezos illustrates, the owners can be anyone.

The US political system is set up in such a manner that it allows for anyone with enough money to steer policy that benefits them personally. Politicians are hardly particular when it comes to who’s throwing money at them, so ownership is constantly in a state of flux.

To show just how much of a rigged football game it is, we need only look at Trump calling out Bezos on the postal ordeal — while remaining entirely silent on Amazon’s malevolent partnership with the military industrial complex. 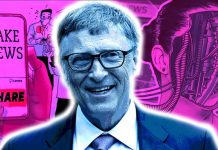