History is clear on where we’re headed

Do you have the nagging sense that our empire is in decline?

If so, don’t be embarrassed by it. Historically speaking, we’re in very good company. Far larger and longer-lived empires than ours have come and gone over the millennia.

This was hit home for me on a recent trip. I scored a major “dad win” by taking my youngest daughter, Grace, to England for her 18th birthday (we live in Massachusetts, USA).

All on her own, Grace developed an abiding love of mythology at a very young age: Greek, Roman, Norse, Native American, Aztec…you name it. She’s read the Iliad four times, a different version each time, as each has the biases of the translator subtly woven throughout.

Naturally, her dream mini-vacation involved going to the British Museum where the Rosetta stone lies, along with Viking horde treasures and every possible Roman, Greek and Egyptian artifact one could hope to see.

The British empire came of age at the perfect time to muscle in and “retrieve” the cultural treasures of many different countries. Such are the spoils of empire.

Who knows, perhaps one day we’ll see sliced off segments of the Palace of Westminster on display in Cairo’s main square. History ebbs and it flows. Back and forth. Victors and losers swapping places over and over again.

The treasures on display at the British Museum also show us that every race and culture has revered beauty. The most intricate and delicate and objectively beautiful jewelry and adornments were worn by kings and queens, priestesses, nobles, and warlords alike.

Sutton Hoo
Consider the find of the Sutton Hoo burial mound. An eminently important and revered individual (possibly Raedwald) was buried sometime around the year 740, with an enormous ship 89 feet in length serving as his burial chamber.

Just imagine how many people it took to dig a hole in the ground that held the ship to its gunnels, and then bring forward enough earth to cover the whole affair in a gigantic mound of earth more than ten feet high in the middle. As a gardener, I can tell you that dirt is heavy stuff that really resists being moved by hand. Hundreds of people must have labored for a very long time to create this burial mound.

Whoever this person was, he was revered enough to be buried with an astonishing collection of wealth. And, perhaps more amazingly, none of it was looted.

Here’s the sword belt, made of an intricate lattice of pure gold and polished garnet:

Isn’t that a beautiful work of art?

Again, nobody came back and looted this afterwards. Maybe they killed the workers who built the gravesite, but surely folks still knew a very rich ruler had been buried in the area. And yet nobody looted the site. To me, it’s hard not see that as a sign of how much the man buried there was respected by his kinsmen.

Here’s a close up of the dragons head from that sword belt: 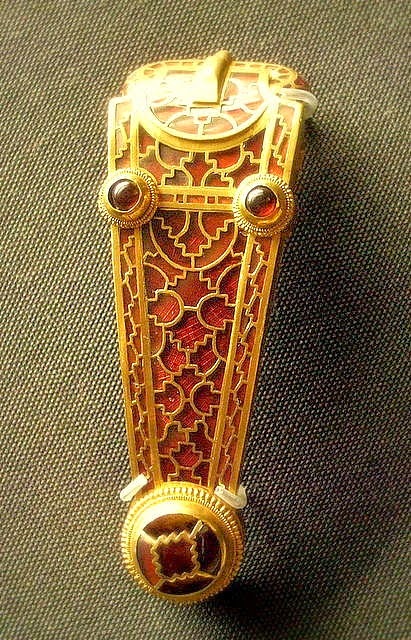 If you’ve ever worked with garnet, you know just how devilishly hard it is (a 7.5 on a scale of 10) and how much work it must have taken to polish up even one of those tiny panels, let alone all of them, and into such careful shapes.