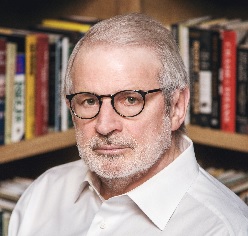 Perhaps we have missed something: Like the possibility that the canyons of Wall Street are actually located on another planet several light years from earth!

Otherwise, how can you explain the equipoise of a stock market sitting at the tippy-top of a nine-year bubble expansion and confronted with the potential outbreak of World War Three?

Folks, like some alien abductors, the Deep State has taken the Donald hostage, and with ball-and-chain finality. Whatever pre-election predilection he had to challenge the Warfare State has apparently been completely liquidated.

Trump’s early AM tweet today, in fact, embodies the words of a man who had more than a few screws loose when he took the oath, but under the relentless pounding of the Imperial City’s investigators, partisans, apparatchiks and lynch-mob media has now gone stark raving mad. To wit:

“….Russia vows to shoot down any and all missiles fired at Syria. Get ready Russia, because they will be coming, nice and new and “smart!” You shouldn’t be partners with a Gas Killing Animal who kills his people and enjoys it!

Yes, maybe Wall Street has figured out that the Donald is more bluster than bite. Yet when you consider the broader context and what the Russian side is now saying, it is just plain idiotic to own the S&P 500 at 24X. After all, earnings that have been going nowhere for the past three years (earnings per share have inched-up from $106 in September 2014 to $109 in December 2017), and now could be ambushed by a hot war accident in Syria that would rapidly escalate.

Indeed, did the robo-machines and boys and girls down in the casino not ponder the meaning of this message from the Kremlin? It does not leave much to the imagination:

#Russian ambassador in beirut : “If there is a strike by the Americans on #Syria , then… the missiles will be downed and even the sources from which the missiles were fired,” Zasypkin told Hezbollah’s al-Manar TV, speaking in Arabic.

Sure, the odds are quite high that the clever folks in the Pentagon will figure out how to keep the pending attack reasonably antiseptic. That is, they will bomb a whole bunch of places in Syria where the Russians and Iranians are not (after being warned); and also deploy stand-off submarine platforms to launch cruise missiles and high-flying stealth aircraft to drop smart bombs, thereby keeping American pilots and ships out of harm’s way.

Then, after unleashing the Donald’s version of “shock and awe” they will claim that Assad has just received the spanking of his life and that the Russians and Iranians have been messaged with malice aforethought.

But our point is not that Douma is Sarajevo, and, besides, this is still April, not August. What should be scaring the daylights out of Wall Street is that we are even at the point where the two tweets quoted above are happening.

For crying out loud, there is a brutal, bloody and barbaric civil war raging in Syria where both sides are bedecked in black hats; both sides have committed unspeakable atrocities; and where it is a documented fact that the rebels possess chemical weapons and have launched false flag gas attacks in the past—even as 1,30o tons of Assad’s inventory, which may or may not have been the totality of it, was destroyed according to the certification of the Organization for the Prevention of Chemical Weapons (OPCW).

In that context, who can tell whether the alleged chlorine gas release last Saturday in Douma originated in a bomb dropped by Assad’s air force or came from a rebel stockpile that was hit by a bomb? Or whether it was another deliberate false flag attack staged by the jihadists or perhaps that it never happened at all.

The evidence comes mainly from rebel forces opposed to Syrian President Bashar al-Assad. One of these was the Violations Documentation Center, a virulent anti-Russian organization funded by George Soros. Another was the White Helmets, a completely comprised operation financed by the US and UK and which has operated only in rebel held territories— often check-by-jowl with the al-Nusra Front and other terrorist elements.

Indeed, Washington’s fabled spies in the sky and taps on every node of the worldwide web can read your email and spot a rogue camel caravan anywhere in a Sahara sandstorm. But they can not tell whether dead bodies are the victims of bullets, bombs, collapsing buildings or chlorine gas. You need to be on the ground and perform chemical tests for that, and Washington just plain isn’t there.

Besides, even if a careful investigation–like the one proposed by Sweden and which the US and UK vetoed at the UN—were actually completed, why is it Washington’s prerogative to administer a spanking to the culprit?

For one thing, if you are in the spanking business owing to bad behavior, then just within the region you would also need to administer the rod to al-Sisi in Egypt and Erdogan in Turkey; and also to Washington’s on and off wards in Baghdad and to the Crown Prince of Saudi Arabia for his genocidal attacks on Yemen. While you were at it, why would even Bibi Netanyahu be spared the birch—given his periodic “lawn mowing” exercises on the Gaza strip?

The point is, Assad has never attacked, threatened or even looked cross-eyed at the United States. So you would have thought that administering spankings to international malefactors is the business of Washington’s permanent War Party, not the leader of America First.

To be sure, the only evidence we have to date is the gruesome images posted on the internet by the “Douma Revolution”, which we don’t credit because it is a tool of the good folks of Jaish al-Islam (Army of Islam), who were holding 3,200 pro-Assad hostages in cages when the attack happened. But even if Assad is culpable, why is the Donald getting out the birch switch if he doesn’t mean to effectuate regime change?

Yes, inconstancy is his middle name. But how in god’s name could even the Donald have rearranged the modest amount of gray matter under his great Orange Comb-Over so quickly and completely with regards to Syria?

As a reminder, this is what the Donald said just last week:

“We’ll be coming out of Syria, like, very soon,” Trump said on Thursday, “Let the other people take care of it now. Very soon, very soon, we’re coming out….We’re going to get back to our country, where we belong, where we want to be.”

The fact is, it’s way too late to drag Bashar Assad behind the Moammar Khadafy Memorial Jeep to be ritually sodomized by his enemies. That’s because he’s already won the civil war (red area in map below).