IN 2017, more than a half-million human beings — 553,742 of them to be exact — were homeless in the U.S. for at least some time. Last year was the first since the 2008 financial crisis that America’s homeless population grew. The 2016 U.S. census found that 12.7 percent of Americans — which translates to just over 43 million human beings — live below the poverty line. Millions of American children live in hunger: according to a 2015 U.S. Department of Agriculture study, the U.S. has “13.1 million households with children that often go without food: ‘food-insecure households.’” 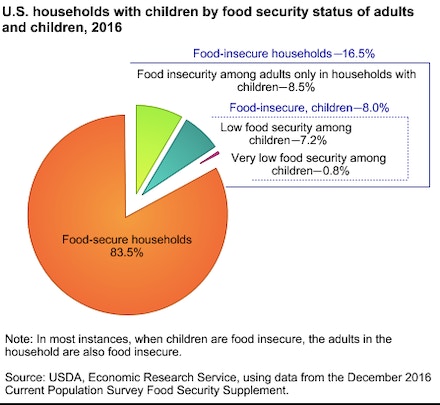 Those horrifying statistics are just for the U.S. Extreme human deprivation and suffering is pervasive all over the planet: hundreds of millions of human beings live in unimaginable poverty. According to the 2016 comprehensive World Bank study on global inequality, “767 million people are estimated to have been living below the international poverty line of US$1.90 per person per day. Almost 11 people in every 100 in the world, or 10.7 percent of the global population, were poor by this standard.” There is an “estimated 780 million illiterate adults worldwide, nearly two-thirds are women.”

Although roughly half of the world’s poor live in sub-Saharan Africa, they are found in large numbers on every continent on the planet (see chart, right). Close to a billion people lack basic plumbing; according to the Guardian in 2015, “around the world, 946 million people still go to the toilet outside.” Millions of children all over the world, and hundreds of thousands of people in the U.S., die every year from treatable diseases due to lack of available medical care.

The World Health Organization found in July of last year that “some 3 in 10 people worldwide, or 2.1 billion, lack access to safe, readily available water at home, and 6 in 10, or 4.5 billion, lack safely managed sanitation.” If one adds in non-human animals — from abandoned, starving pets to industrial systemic cruelty toward farm animals — the amount of deprivation and poverty-caused suffering in the world is virtually endless.

Actual charities in the U.S., non-profits that provide critical services to their communities, have been plagued by extreme financial difficulties for years. In January, the Journal Sentinel, citing a new report, explained that “the financial health of the nation’s community-based organizations — or CBOs — is increasingly precarious.”

Large numbers of Americans lack the ability to secure basic legal representation even when charged with serious crimes. One major reason that the U.S. imprisons more people than any other country in the world — both in terms of absolute numbers and proportionally — is that legal aid services have been continually slashed to the point where poor people and even those who are lower-middle-class have little chance of having competent, zealous representation, because of how overworked public defenders are.

As a result of these severe financial constraints in the legal system, citizens are often forced to plead guilty and accept prison terms because it’s their only viable option. As the Guardian wondered in 2016: “How many of the 30 defendants present for a single ‘mass plea’ hearing in Louisiana’s 16th judicial district in June would have pleaded not guilty if they’d had more than 20 seconds of legal counsel?”

IN THE MIDST of all of this need, struggle, misery and deprivation, a just-created online charity fund is enjoying massive success and an extraordinary outpouring of donations from small donors. It has become one of the most successful pages on the popular GoFundMe site: a campaign to raise money for former acting FBI Director Andrew McCabe (pictured, above, next to Attorney General Jeff Sessions last year). Created just 48 hours ago with the goal of raising $250,000 for McCabe’s “legal defense fund,” it has already doubled that amount — to over $500,000 — and shows no sign of slowing down, as donations continue to pour in as of publication of this article.