So many things in life are inevitable.

But are they imminent?

What you’re about to read in this book is a dangerous scenario we believe is on the horizon. And while we may not be able to predict if this scenario will happen in a month, two months, or two years… we are absolutely convinced it will happen.

Cryptocurrencies, as I’m sure you’ve noticed, have now gone mainstream…

Since then, more and more governments around the world have moved to regulate (and even ban) cryptos…

They have gotten simply too big to ignore.

Remember: Every dollar invested in a cryptocurrency is a dollar that doesn’t benefit a money-hungry government.

That’s why countries are banding together to STOP cryptos.

In fact, by the time you read this book, a global ban on cryptocurrencies may already be in place.

Some of the world’s largest websites—including Google, Facebook, and MSN—now prevent advertisers from even mentioning Bitcoin or cryptocurrencies on their sites…

And several high-ranking officials and intellectuals have all warned of the danger of private cryptocurrencies.

What all these global elites agree on, however, is that the only cryptocurrencies allowed to survive are the ones backed by governments.

According to a study by Cambridge University, a full 80% of countries surveyed were either researching or actively developing their own cryptocurrencies.

Venezuela has already raised almost $1 billion for its oil-backed cryptocurrency, the “petro”…

And the Marshall Islands also announced their own state crypto.

This is just the beginning…

Here in America, there’s been serious talk about issuing a state-backed crypto called the “Fedcoin.”

The government, you see, is in real trouble…

And interest rates are starting to creep up, which means it will soon cost BILLIONS more to service our debt.

That’s a big reason why the government has been cracking down on cash purchases… and why this will likely accelerate in the future.

Each year the “underground economy” costs the IRS $500 billion in lost taxes.

With physical cash on the way out… and a new state crypto like Fedcoin on the way in… all of our savings would essentially be “trapped.”

That way, the government would greatly minimize how much they lose in unreported taxes each year…

On top of that, it would be very easy to implement a nasty new tax, too—like the wealth tax in France, where 1–2% of your net worth gets taxed each year, regardless of whether you have income or not…

Or like the “savings” taxes in many countries around the world.

(These are the bizarre, so-called “negative” interest rates. This is when you pay the bank for lending them money.)

Central planners like having these negative interest rates as an option because they say that’s one sure way to “stimulate” the economy when times get tough… They figure that people would rather use their money on stuff like new cars and houses rather than seeing their money taxed away in a bank.

Fedcoin lets you do this. 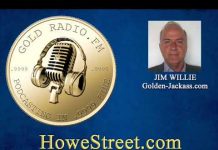 Bitcoin vs. US Dollar, Outlook for Gold and Silver. Jim Willie