by Peter Koenig, The Saker: 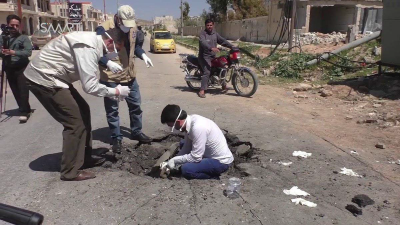 Poison gas is not only deadly, it often provokes a slow suffocating death. That, perpetrated on innocent children, is particularly cruel. But when such poison gas attacks are mere false flags, or by the new term, “false news”, and are used to provoke war, perhaps an all annihilating war, then humanity has turned to what it never should have become – a lowly-lowly herd of brainless zombies. Is that what we have become – brainless, greedy, selfish beings, no sense of solidarity, no respect for other beings; I am not even talking about humans, but any living being.

Poison gas, the weapon of choice for fear. Poisoning in Salisbury of the former Russian double-agent, Sergei Skripal and his daughter, Yulia, visiting her dad from Moscow. Poisoning with a nerve gas, called Novichok that was allegedly made in Russia. In the meantime, we know that nerve gas made in the former Soviet Union, now non-existent in Russia, was military grade and deadly. The gas used for the alleged attack was not deadly. We also know by now that the UK – all of their highest officials, from PM May down the ladder, lied so miserably that they will have a hard time recovering. It will backfire. Unlike the foreign secretary, Johnson boy pretended their secret bio-gas / bio-weapon laboratory Porton Down, just 13 km down the road from Salisbury, where the pair was allegedly found unconscious on a park bench, assured him the gas was made in Russia. Alas, the laboratories chief chemists testified later to the media that they could not be sure that the substance was made in Russia. No, of course not.

In fact, Porton Down, working in close collaboration with the CIA, is a highly sophisticated chemical warfare facility that can easily make the gas themselves – at the grades they please, deadly or not so deadly, if it should serve a “false news” purpose – which this did.

Were father and daughter indeed poisoned? – This is a legitimate question. Who has seen them since the alleged poisoning occurred on 28 March? – They disappeared from the public eye. Apparently, they are both recovering, Yulia having been released from hospital a few days ago, but has not been seen by anyone in public, nor been able to talk to the media, lest she could say “something” the public is not allowed to know. Her father is also recovering and may be released soon – released from where? – Is this all a farce?

An aunt talked to Yulia from Moscow, where she noticed that Yulia was not free to talk. The aunt wanted to visit her niece in the UK but was obviously denied a visa.

Where are father and daughter? – Washington has “offered” them a new home and new identity in the US, to avoid further poisoning attempts… how ridiculous! A blind man or woman must see that this is another farce, or more correctly, an outright abduction. The two won’t have a chance to resist. They are just taken away – not to talk anymore to anyone ever. – That’s the way the story goes. The lies are protected, and the “Russia did it” syndrome will prevail – prevail in the dumb folded public, in the herd of pigs that we all have become, as Goebbels would say.

And the saga continues. The saga to drum up war. That’s the purpose of it all. Nothing else – Russia, the evil nation, led by an evil leader, must be subdued and conquered. But the empire needs the public for their support. And the empire is almost there. It disposes of a vicious media corporate army – that lies flagrantly about anything that money can buy. It’s like spitting in the face of the world, and nobody seems to care, or worse, even to notice.
—
On the other side of the Mediterranean is Syria. A vast and noble country, Syria, with a leader who truly loves his people and country, a leader who has despite a foreign induced war – not civil war – a proxy war, instigated and funded by Washington and its vassal allies in Europe and the Middle East; Syria, a highly educated socialist country that has shared the benefit of her resources, free education, free medical services, free basic infrastructure, with her people. This Syria must fall. Such strength cannot be tolerated by the all-dominating west. Like Iraq and Libya, also socialist countries once-upon-a-time, and like Syria, secular Muslim nations, sharing their countries wealth with the people, such countries must fall.

According to Pentagon planners and those Zion-neofascist thinktanks that designed the PNAC (Plan for a New American Century), as the chief instrument of US foreign policy, we know since Wesley Clark, the former Supreme Allied commander and Chief of NATO in Europe (1997-2000) talked to Democracy Now in 2007 (https://www.youtube.com/watch?v=r8FhZnFZ6TY ), saying that within 5 years seven countries must fall, one of them is Syria. – Since 2011, the Syrian people have been bombarded by US and NATO and Saudi funded terrorists, causing tens of thousands of deaths, and millions of refugees. Now, even more blatantly, US bases are vying to occupying the northern third of Syria, totally illegally, but nobody says beep. Not even the UN.

The recent fake gas attack on Douma outside of Damascus, has allegedly killed 80 to 120 people, mostly women and children. Of course, that sells best in the propaganda theatre – women and children. Strangely, like last time the infamous White Helmets discovered the gas victims, including a gas canister-like bomb laying on a bed, having been shot through the roof of a house… a totally and unprofessionally staged event. As Russian military quickly discovered and reported. They called on an independent investigation, one that could not be bought and corrupted by Washington. President Assad invited a team of investigators to inspect the scene.

Instead of heeding this invitation, Trump, the bully, calls Mr. Assad an “animal” and a “monster”, twittering his brainless aggressions throughout the world. Tell you what, Mr. Trump, Bashar al-Assad is a far better human being than you are a monster. You and your dark handlers don’t even deserve being called human. Mr. Assad has regard and respect for his people, attempts to protect them and has so far succeeded with the help of Russia, Iran and Hezbollah, recovering the last bits of Syrian territory from the terrorist, except of course, the northern part, where the chief terrorist and the world’s only rogue state has itself installed, the US of A. – Why in the world would Mr. Assad choose to gas his own people? Especially, when he is winning the war? – People, ask yourself, cui bono (who benefits?) and the answer is simple: The western aggressors, who seek a reason to mass bomb Syria into even more rubble, causing even more death and destitution. That’s who.

While you, Donald, and those monsters that direct you from behind the scenes, have no, but absolutely no respect for your people, for any people on this globe, for that matter, not even for your kind, for your greed-no-end kind of elite, as you bring the world to the brink of an all-destructive, all killing annihilating war.

Since the other fake event, 9/11, we are, of course, already in a “soft version” of WWIII, but that’s not enough, the United States needs a hard war, so badly it doesn’t shy away from destroying itself. That’s how blinded your own propaganda has made you Americans, you generals, you corporate “leaders” (sic-sic) – and all you Congress puppets. That is the sheer truth. You better read this and wake up. Otherwise your dead sentence is hastened by your own greed and ignorance.

Both Russia and the US drafted a Security Council Resolution – which of course are both not approved, with Nikki Haley lambasting Russia, accusing them of being responsible for the countless deaths in Syria – pointing again to the children and women, making up the majority. Again, it sells best in the world of psychological propaganda, while evil Nikki Haley knows very well who has caused all these deaths by the millions, destitution and refugees by the millions, tens of millions throughout the Middle East and the world – her own country, directly or through NATO, the European puppets allies and proxy wars, paid and funded by Washington and by elbow-twisting her vassals.

On 9 April – UNSC – while Nikki Haley, repeats and over-repeats her lies and fake accusations, the Russian Ambassador to the UN, Mr. Vassily Nebenzia, listens. And then in a twenty-minute statement of sheer intelligence, he dismantles all the lies, and lays bare the truth, about all the fakeness being played out internationally. The depth with which he addresses the assembly is concise and so brilliant, none of his UK, French and German counterparts could have ever come close to a statement of this magnitude an dexcellence. Even Ms. Haley can’t help glancing over ever-so often to Vassily Nebenzia, as he speaks (http://thesaker.is/russian-ambassador-to-the-un-vasily-nebenzea-addressing-the-un-sc-9-april-2018/ ). Her eyes reveal some kind of hidden admiration for what he says. – After all, she can’t be as dumb as she is paid for to look and sound.