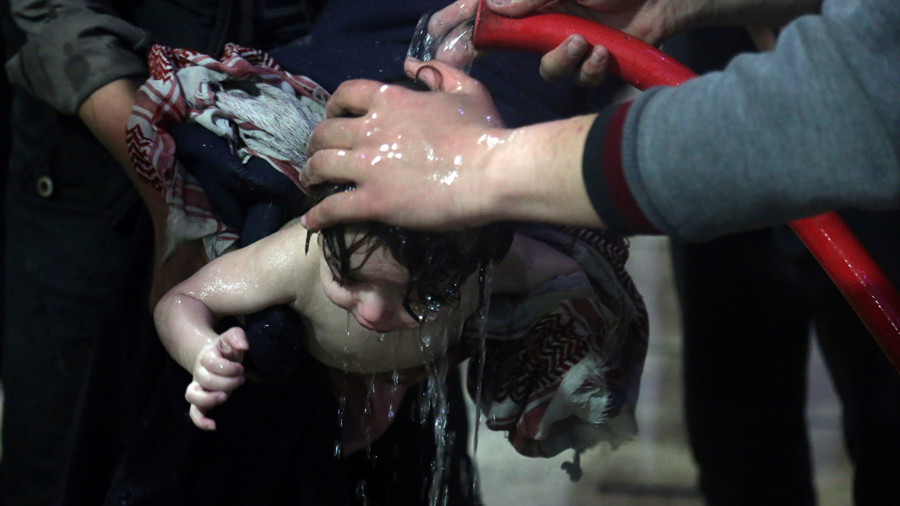 The Russian military has found no trace of chemical weapons use after searching parts of Syria’s Douma allegedly targeted by an “attack.” Photos of victims posted by the White Helmets are fake, Russia’s Defense Ministry said.

Experts in radiological, chemical and biological warfare, as well as medics, on Monday inspected the parts of the Eastern Ghouta city of Douma, where an alleged chemical attack supposedly took place on Saturday, the Russian Reconciliation Center for Syria said in a statement.

The specialists “found no traces of the use of chemical agents” after searching the sites, the statement said. The center’s medical specialists also visited a local hospital but found no patients that showed signs of chemical weapons poisoning. “All these facts show… that no chemical weapons were used in the town of Douma, as it was claimed by the White Helmets,” the statement said, referring to the controversial “civil defense” group that was among the first to report about the alleged attack.

“All the accusations brought by the White Helmets, as well as their photos… allegedly showing the victims of the chemical attack, are nothing more than a yet another piece of fake news and an attempt to disrupt the ceasefire,” the Reconciliation Center said.

On Saturday, some rebel-linked groups, including the White Helmets, accused the Syrian government of carrying out a chemical attack that, allegedly, affected dozens of civilians in the Eastern Ghouta town of Douma. The reports have already provoked a wave of outrage in the West, as the US and the EU rushed to put the blame for the incident on Damascus and Moscow. US President Donald Trum hastily denounced the perceived attack as a “mindless” atrocity and a “humanitarian disaster for no reason whatsoever,” warning of a “big price” to be paid.

Syria and Russia have dismissed the accusations and called the reports fake news, aimed at helping the extremists and at justifying potential strikes against Syrian forces. In the very early hours of Monday, Israeli fighter jets targeted Syria’s T-4 airbase in Homs province, the Russian Defense Ministry said. Israel has not commented on the strike. Earlier, a number of Israeli officials had called on the US to strike Syria as a response to the reported chemical attack.

Trump has promised to decide on potential actions against Syria within 24-48 hours, adding that nothing is “off the table” yet. Earlier, US Defense Secretary James Mattis said that the US did not rule out a potential military action against Damascus.

The White Helmets claim to be volunteer first-responders saving Syrians caught up in the fighting. They gained traction in the western media and rose to prominence during the Battle of Aleppo in 2016, while working exclusively in the militant-controlled areas of the city and becoming one of the most widely used sources of information and visual materials in the West.