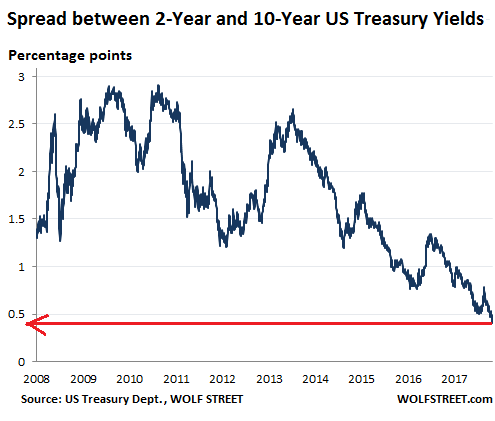 Happily dreaming in La-la-land till the rude awakening.

The Fed’s efforts to raise interest rates across the spectrum have borne fruit only in limited fashion. In the Treasury market, yields of longer-dated securities have not risen (prices fall when yields rise) as sharply as they have with Treasuries of shorter maturities.

The two-year yield has surged to 2.41% on Tuesday, the highest since July 2008. But the 10-year yield, at 2.82%, while double from two years ago, is only back where it had been in 2014. So the difference (the “spread”) between the two has narrowed to just 0.41 percentage points, the narrowest since before the Financial Crisis:

This disconnect is typical during the earlier stages of the rate-hike cycle because the Fed, through its market operations, targets the federal funds rate. Short-term Treasury yields follow with some will of their own. But the long end doesn’t rise at the same pace, or doesn’t rise at all because there is a lot of demand for these securities at those yields.

Investors are “fighting the Fed”— doing the opposite of what the Fed wants them to do – and the difference between the shorter and longer maturities dwindles, and it dwindles, and it causes a lot of gray hairs, and it dwindles further, until it stops making sense to investors and they open their eyes and get out of the chase, and suddenly long-term yield surge higher, as bond prices drop sharply. That’s why short sellers have taken record positions against the 10-year Treasury recently: they’re waiting for yields to spike to the next level.

But this disconnect – this symptom of investors fighting the Fed – in the Treasury market is mild compared to the disconnect in the junk bond market. There, investors have completely blown off the Fed. At least in the Treasury market, 10-year yields have risen since the Fed started getting serious about rate increases in December 2016. In the junk bond market, yields have since fallen.

In other words, despite the Fed’s tightening, the junk bond bubble has gotten bigger. And investors are not yet showing any signs of second thoughts.

At the riskiest end, the average yield of junk bonds rated CCC or lower dropped two percentage points since the Fed got serious about tightening, from 11.9% in December 2016 to 9.9% currently (per ICE BofAML US High Yield CCC or Below Effective Yield index): 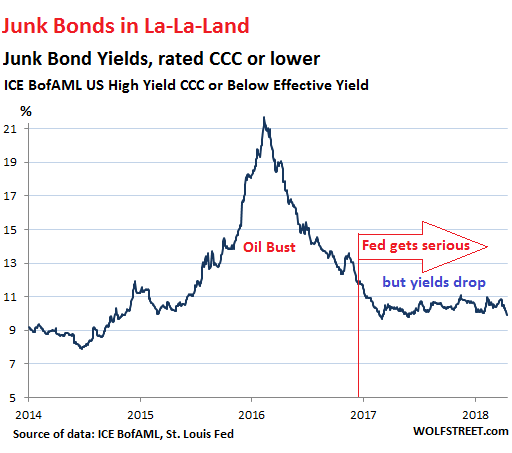 The difference in yield between junk bonds (high risk) and Treasury securities (low risk) is how much investors insist on getting paid for taking more risks. When the spread narrows – hence, when the “risk premium” shrinks – investors are chasing yield and are taking ever larger risks for ever smaller amounts in compensation.