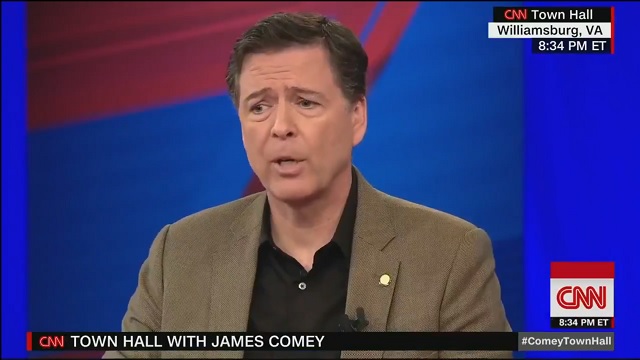 “I hear this term deep state all the time,” Comey said. “There is no deep state, but there is a deep culture and a commitment to the rule of law, equal protection of the laws.”

Incredibly, the audience managed not to burst into laughter.

James Comey: "I hear this term 'deep state' all the time. There's no deep state, but there is a deep culture and a commitment the fundamental values that are at the core of our Constitution, that runs really deep" #ComeyTownHall pic.twitter.com/z9D3AkgmW2

“The fundamental values that are at the core of our constitution that runs really deep in the FBI, the Justice Department as a whole, the intelligence community. The United States military services,” Comey continued.

“It is the ballast that gives me comfort and I hope should give all Americans comfort, but that can be damaged in any significant ways,” he said. “I don’t think any president serves long enough to damage, to flip that ship over, but if we are silent, tremendous damage will be done that will take us time to recover.”

“You said there is no deep state but you talk about a deep culture and it doesn’t sound that much different,” Anderson Cooper countered. “A deep culture which has ways of doing things and believes it is the right way of doing things isn’t that some of what President Trump was elected to shake up?”

“Absolutely not,” Comey said. “No one, I hope, voted for him with the idea that he would destroy those values. So that is what I mean by a deep culture. It is a culture that we should celebrate, and the rest of us who are not part of it ought to make sure we call it out when we see it threatened or damaged.”

“When we say the deep state is trying to destroy president Trump,” Cooper pressed one more time. “You are saying point blank that is not true?”

No one buys this garbage. Two recent polls found the overwhelming majority of Americans on both sides believe there’s a deep state and view it as a “major problem.”

Obviously strongly prefer normal democratic and constitutional politics. But if it comes to it, prefer the deep state to the Trump state.

The Democratic Party is actively being taken over by CIA and other former intelligence operatives.

Democratic Senator Chuck Schumer openly threatened Trump the deep state “have six ways from Sunday at getting back at you.”

In July 2017, John Brennan effectively called for a coup to overthrow Trump if he tries to fire Mueller and shut down his witch hunt.

“I think it’s the obligation of some executive branch officials to refuse to carry that out… I would just hope that this is not going to be a partisan issue. That Republicans and Democrats are going to see that the future of this country is at stake and something needs to be done for the good of the future,” Brennan said.