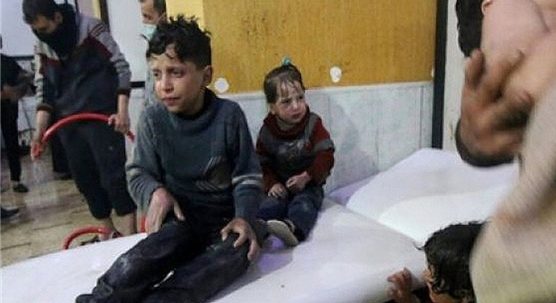 A new interview with the now infamous boy in the alleged chemical attack video used as a justification for the United States-led bombing of Syria is adding more doubt to the official narrative. The boy says he was told to go to the hospital where people started dousing him with water.

One of the main “characters” in the footage at the hospital is a water-soaked boy, who is seen being sprayed with water by people who claim to be “rescue workers.” It’s not clear whether they are doctors from the hospital, human rights activists, or White Helmets members. The latter usually make such videos and send them to news agencies, including Reuters.

In what could be the biggest fabrication in recent months, the Douma boy in the chemical attack video and his family have spoken about their ordeal to a Russian TV crew. It sure appears that the chemical attack was “staged suffering” by the White Helmets. The boy said that he was asked to go to the hospital, where people “grabbed” him and started “pouring water” over his head for no apparent reason.

Panic, fear, screaming adults, and frightened children featured in the purported footage of the aftermath following the alleged chemical attack in the Eastern Ghouta city. The video has been widely circulated by the mainstream media since April 7 after being posted by the so-called Douma Revolution group and “evidence” of the aftermath of the alleged attack.

A Russian broadcaster VGTRK said it found the boy in the video, who appeared to be 11-year-old Hassan Diab. His story differed from the one presented by the activists and later propagated by the mainstream media.

Hassan said he was in the basement with his mother, who said they ran out of food when they heard some noise outside. When they went outside, they heard random shouting that they should go to the hospital, so they did. “Somebody was shouting that we had to go to the hospital, so we went there. When I came in, some people grabbed me and started pouring water over my head,” he told Evgeny Poddubny, a war correspondent from Russian broadcaster VGTRK. Hassan confirmed that he was the boy in the video, and was very scared when the whole situation unfolded. He is now fine and shows no symptoms of having experienced a chemical attack two weeks ago.

In an Instagram post, Poddubny claimed that 11-year-old Hassan got some much-needed food in exchange for his participation in the staged video. Hassan’s father’s story corroborates his son’s. The boy was eventually found by his father, who said he didn’t hear about any chemical attack that day. “I went to the hospital, walked upstairs, and found my wife and children. I asked them what had happened, and they said people outside were shouting about some smell and told them to go to the hospital. At the hospital, they gave dates and cookies to the kids,” he said.

One of the medical workers, who was reportedly on shift at the time, said he was surprised by the sudden influx. “Some people came here and washed people. They said: ‘Chemical attack. Chemical attack.’ We didn’t see any chemical attack symptoms,” he added. He did, however, say that there were many people with respiratory problems as a result of dust from recent bombings in the city. British war journalist Robert Fisk also noted that that was the story he’d gotten when speaking with a doctor from Douma.