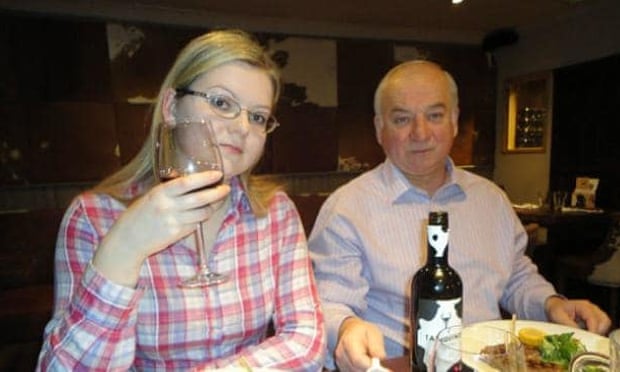 On March 4, 2018, Sergie Skripal and his daughter Yulia, who was visiting him from Moscow, were poisoned with a Novichok nerve agent after he stopped by a local store.

Skripal is a Russian double agent who WORKED FOR Christopher Steele’s company in England. Steele was behind the fake Russian dossier on Trump.

The US expelled 60 Russian diplomats following the poison attack after the poisoning of former spy Sergei Skripal and his daughter in Salisbury, England.

On Saturday Russian Foreign Minister Sergei Lavrov said a Swiss lab analyzed the poison and said the nerve agent was not produced in Russia or the Soviet Union.

Russian Foreign Minister Sergei Lavrov announced on Saturday the nerve agent used to poison former Russian spy Sergei Skripal and his daughter was never produced in the Soviet Union or Russia.
Lavrov said a Swiss lab analyzed the poison and said the substance may have been produced in the US or UK.

Russia’s foreign minister says Moscow has received a document from a Swiss lab that analyzed the samples in the nerve agent poisoning of an ex-Russian spy, which points at a Western-designed nerve agent as a likely cause.

Sergey Lavrov said Saturday that Moscow received the confidential information from the laboratory in Spiez, Switzerland, that analyzed samples from the site of the March 4 poisoning of Sergei Skripal and his daughter in the English city of Salisbury.

He said the analysis was done at the request of the Organization for the Prohibition of Chemical Weapons.

Russia's Lavrov says Skripals may have been poisoned by substance Russia never made https://t.co/ViBaf5aH7W pic.twitter.com/Eaw07PxL67