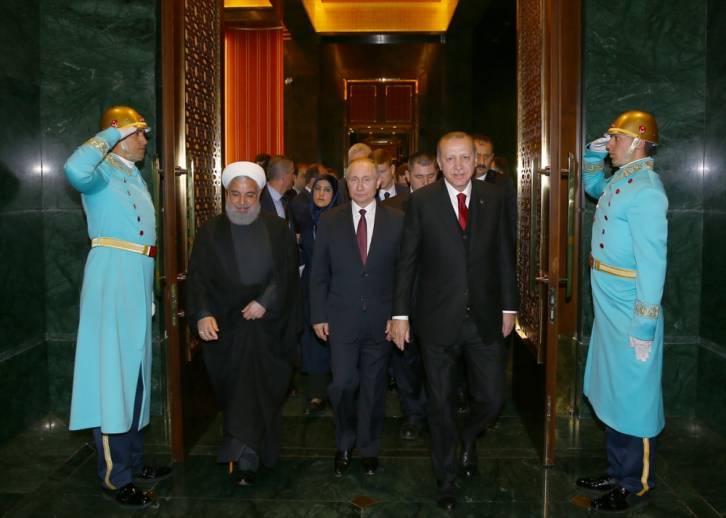 “A more graphic illustration of the synchronicity drive towards Eurasia integration would be hard to find.”

As presidents Vladimir Putin, Hassan Rouhani and Recep Tayyip Erdogan met in Ankara for a second Russia-Iran-Turkey summit on the future of Syria, Moscow hosted its 7th International Security Conference attended by defense ministers from dozens of nations.

A more graphic illustration of the synchronicity drive towards Eurasia integration would be hard to find.

Crucially, China sent not only a high-ranking delegation to Moscow, but most of all a loud and clear message. General Wei Fenghe, the new Chinese Defense Minister, side by side with Russian counterpart Sergey Shoigu, said: “The Chinese side came to let the Americans know about the close ties between the Russian and Chinese armed forces.” Shoigu, for his part, underlined the “special character” of the Russia-China partnership.

Even before the meeting the Global Times stressed the point that non-stop Russia demonization coupled with the now rolling US-China trade war will only strengthen the “special character” partnership.

And then Iran’s Defense Minister, Brigadier General Amir Hatami, expanded the scope, saying “foreign plans” related to security in the Middle East would inevitably fail – they must be hatched within Southwest Asia.
What happened in Moscow necessarily must be crossed over with what happened in Ankara.

A common commitment
The first Russia-Iran-Turkey trilateral meeting on Syria was in Sochi on November 22 last year. Sochi led to the formation of the Syrian National Dialogue Congress and a 150-strong committee tasked to draft a new constitution for Syria. All these procedures essentially follow guidelines established by the 2012 Geneva peace process. Even the UN praised Sochi as “an important contribution to a revived intra-Syrian talks process.”

For the Ankara meeting, the foreign ministers of Russia (Sergey Lavrov), Iran (Mohammad Javad Zarif) and Turkey (Mevlut Cavusoglu) met in Astana in early April to prepare the terrain.

The final joint statement is unmistakable, emphasizing their common commitment to the sovereignty, unity, independence and territorial integrity of Syria.

The fact that Ankara is Putin’s first foreign trip after reelection speaks volumes. The Russia-Iran-Turkey strategy on Syria, incrementally developed in Astana, established a delicate balance of de-escalation zones – the Damascus suburb of eastern Ghouta, Idlib, Homs and the Syrian-Jordanian border – and humanitarian corridors, allowing scores of civilians to leave war zones, especially in the case of Ghouta.
The war in Ghouta against a jihadi galaxy has been all but won by the Syrian Arab Army (SAA), supported by a Russian mix of air support and negotiation skills and, significantly, no input from Iranian military commanders. So-called “moderate rebel” remnants were dispatched to Idlib. Damascus is free from shelling. That was the SAA’s biggest victory after the liberation of Aleppo in December 2016.

Northern Syria, however, remains a much trickier proposition, as we have a de facto NATO versus NATO subplot; Turkish troops versus the YPG Kurds, a proxy US force.

The fact that the SAA-Russia offensive in eastern Ghouta happened in parallel to the neo-Orwellian Operation Olive Branch by the Turks in the Kurdish canton of Afrin spells out a complex Russia-Iran-Turkey deal worked out in Astana – as diplomats confirmed to Asia Times.

As much as Tehran may be exasperated by Turkish military incursions into Syria, by ordering Iranian commanders not to interfere in both eastern Ghouta and Afrin, Tehran made sure Ankara would not derail the extermination, and or transfer of jihadis threatening Damascus.

The key discussion at the trilateral summit in Ankara was about what happens next to Idlib – now the ultimate jihadi “moderate rebel” refuge, where Hayat Tahrir al-Sham, which is connected to al-Qaeda, is fighting a Syrian Liberation Front backed by Turkey that also happens to harbor hardcore jihadis such as Ahrar al-Sham.

It will all hinge on whether Ankara will be able to persuade this congregation of nasty forces that the war is in fact over. Otherwise, the SAA, backed by Russian airpower, will embark on yet another bombing campaign, potentially adding extra hundreds of thousands of refugees to the 3.5 million already holed up inside Turkey’s borders.

What is certain is that Ankara does not feel inclined to leave Syria’s northwest and north-central areas anytime soon. How Moscow and Tehran – not to mention Damascus – will react is an (explosive) open question.

Get me my S-400s on time
The Russia-Turkey partnership is all business – centered on a crucial energy, nuclear and weapons triangle.

Russia, “at the onset of the creation of the nuclear industry in Turkey,” according to presidential aide Yury Ushakov, will start building Turkey’s first nuclear power plant at Akkuyu at a cost of $20 billion. The first reactor is expected to be ready by 2023, and the plant will be owned by Russia.

Ep. 1469 Watch the Liberal Meltdown After This Announcement – The Dan Bongino Show