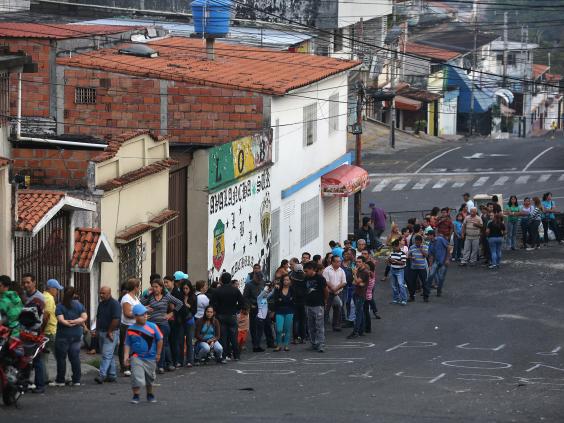 Looking back, there were warning signs. First, let me tell you what life used to be like before the Venezuelan economic collapse.

I usually wake up early in the morning, without too much complaint. When I was working in an oil facility 58 kilometers away from home, I had to be out of bed and ready for the bus at 5:20 AM. My wife took me to the bus stop, where the corporate bus would pick me up at 5:45. We were in the office by 7 o’clock.

Then, work all the day with one hour and a half for lunch, most of the times without leaving the company facilities, in the restaurant for employees. Then work until 4:30 PM and take the bus at 4:45. One hour later we were arriving to the city again, depending on the traffic.

I would be with the family until kids bedtime, around 8:45 PM and would work online until 11:00 PM, daily, and would use the early morning on Saturday to dedicate about 3 hours of work while everyone was still sleeping. I enjoyed that work, and the payment was considerable. I had some savings and could buy some preps, spare parts, and send some extra money to my parents to fix their place, or so they could buy some stuff, like clothing, shoes, fix their old car, you get the picture.

This worked well for some years. But then, we had several malfunctions of the busses, and the service was getting worse. I am talking about 2013 or so. There was still food being produced, the military had not had occupied the food production plants and there was not food black market yet.

Tired of such routine, I found another position with the same responsibilities, but in a small partner company, in the same corporation, and much, much closer to home. That was great because I could go in my motorcycle or even my bicycle, could lunch at home, or even lunch in the facility restaurant and take a 15 minutes nap at home, be with my family, grab my coffee thermal cup, and go back to work.

Then the food rationing began.

Once the food rationing started, things never were the same. It was an organized operation. They stopped producing seeds and fertilizer, then started the food rationing and the huge contracts of food supply with external providers almost simultaneously.

The medical service of the company, free for the employees, started to feel deficient. Medical personnel started to migrate during those years. It was a very slow motion starting, but the signs were all over the place.

Our life, however, was still peaceful. We could afford some dinner at our favorite pizza, or sushi place, some beers, going to the movies Saturday and Sunday afternoon for the kids, and going to the pool to relief the heat. Not too much in the city downtown though – it never was safe, even in the good times. We still did all that regular stuff that people usually do. Perhaps excessively quiet, but we enjoyed it. Wife and I could attend some training in Caracas on weekends, in an area of our interest. Those were good years indeed. My salary was enough for make a living for the four of us, and the online job allowed to have some savings…and yes, buying prepping stuff, mostly. I would have worked harder, provided someone would have told me what was about to come.

Warning signs behind the scenes of the collapse

It started slowly, but steady.

Suddenly, the reimbursement of medicines, provided by our company full coverage insurance, and that we employees usually asked for twice or three times a year, started to become every two months because we needed the money flowing. The next year, we would request it monthly, and the waiting lapse for the reimbursement became increasingly longer.

Inflation was starting to flex the muscles and show its ugly face.

I must remind the readers, that we had been suffering an excruciating currency exchange control since even before Hugo arrived to the chair. This has been a constant in our economy, just to be able to make huge fortunes with the “assignment” of currency quotas and the corresponding bribe. It is a corrupted practice that comes from the 80s and has drained our resources at incredible levels. This practice continued in the 90s, with some variations: you were limited by law to a certain amount, and just for travel. If you were an importer and needed a considerable amount of currency, lots and lots of paperwork was needed, but you could import whatever you needed.

Travel checks were easily available, because they usually were used by travelers, and not by anyone else; once entitled to your name, you could not pay things like machinery, imported delis for resale, or some other stuff, so it was much more flexible to acquire for the regular traveler.

Once Hugo arrived, the control over the currency was total, and absolute. We could not use our currency outside of the country and exchange it for the country we were in. The government started to criminalize the possession of foreign money. This is not surprising. The Russians screwed it to their own people just like this. The main thing that made me see that indeed this was going to end very badly.

However, in those years leaving the country, if you had a good paying job and a loan to buy a nice house, it was not still a necessity. We could have it done, but the comfort level was still strong, and plans were plenty. I am talking about 2004-05. We could afford a new little car and the downpayment of our house.

There was a huge economic flow, produced mainly because of the crude prices, and Uncle Hugo firmly standing as the Savior of the Latin American people. Go figure. His ties with Cuba were there, but we never had a chance to know, until later, that they would be so strong and toxic.

What we are experiencing now with our economy is nothing new. It should be expected. We allowed the government take our right to do with our money what we want. We did not raise our head and say “it is enough”at the moment we should. We allowed them rationing the food for our children. Should we have learned before, that this was the same plot that Stalin used in Ukraine, things would have resulted much differently.

But let us go back to how life started to become increasingly harder.
I will ask for some space for a personal parenthesis here. My online job was offered to me once I was looking how to invest the remaining part of my salary. I was looking for some way to retire early in my life, and enjoy other activities for a living.

I got into a finances forum and the people that later hired me had read my comments about finances, and about technical and fundamental analysis, and I worked with them 5 years. Less than 10 years later, I was quitting my day job in the oil industry, after more than 14 years, without a second thought and fleeing out the country because the inflation rate was going to beat us hard as a family. You can imagine the place where my early retirement plans are now.

This said, let’s return to the warning signs and indications. With just 400 dollars a year in our credit card for electronic purchases (using a credit card for online buying in dollars is not possible now) we could buy some stuff that was uncommon or impossible to find in the country. I made a couple of short trips and could use my credit card, with a limited $400 and $200 cash for a 5-day trip. Go figure. This was while Uncle Hugo, his family, and the rest of the leftist gang (including that gigantic, despotic dumpster of a bus driver now in trouble with international justice) enjoyed travels to the entire world, even to countries he did not know that existed, and endless luxuries.

Slowly but steadily, in the period 2013-2017, I experienced the most devastating loss of life quality and buying power that someone could imagine. Once we could live with just what was once a good salary. Nowadays it would not feed anyone else than our furry family: the old Leona (our female dog) who guarded us since she was a puppy, and our two cats.

The stress of watching how everything was getting worse gave me a gastritis problem in 2014, but with the proper medication, it was easily overcome. After a deep (and accelerated) process to collect my stuff together, I decided that health was a priority, and got rid of the stressful thoughts, dedicating myself to pleasant activities like writing, meditation, and such.