Justin’s note: Yesterday, Doug and I discussed why China’s getting ready to roll out a “social credit system”—and why the U.S. could do something similar. Today, in the second part of our conversation, Doug shares more thoughts on this disturbing trend…

Justin: I imagine that corporate America will also be in favor of a social credit system. After all, it sounds like the ultimate marriage between big business and big government.

Doug: Absolutely. It relates to our recent conversation about Facebook and the other tech giants. The government loves these companies, and they’re hooked up with the government. The Deep State really exists.

I dislike Facebook intensely, and don’t use it. Only idiots do. But you know what’s interesting? I set up my Facebook account years ago; it seemed like a good way for old pals to get back in touch. And in the beginning, I would get friend requests from a lot of strangers—I didn’t know who these people were. But neither did I care. So I said “yes” to just about everyone’s “friend request.”

I probably got around 4,000 Facebook friends. I know almost none of them. But, when I check, I only get about four a month now. I’m not sure why. As I said last time, not only are people suspicious of it, but kids think it’s clunky, dumb, and unhip. And they’re right. Only the NSA, FBI, and CIA actually like Facebook.

Anyway, is the drop-off in friend requests because everyone who wants to be my friend is already my friend on Facebook? I doubt it, because I still get about 50 friend requests every week on LinkedIn. Which I’m also not crazy about, but at least business might come out of it.

Justin: Maybe your Facebook social credit rating has fallen… Or maybe you said something in one of our recent interviews that ticked off Zuckerberg.

Doug: Who knows? It’s a black box to me. But I’m one of those people who won’t fit in well to the brave new world that’s evolving.

Justin: So, what can Americans do to protect themselves from this coming social credit system? Should they start by deleting their Facebook accounts? Should they relocate like you and I have? Or do they need to disconnect completely?

Doug: Well, they could do that. But it’s suspicious if you disconnect and delete your Facebook. The Authorities might think you’re about to get rabbit fever. You become a non-person, and that’s almost as bad or possibly even worse than being a suspected bad guy. So, I don’t think that’s the answer.

Instead, I suspect a lot of people will put up false personas. They’ll pretend to be something they aren’t on social media. They’ll put on a public face and act like a good little lamb, but they’ll try to keep it separate from real life. Like Batman and Bruce Wayne, or Superman and Clark Kent, or Zorro and Don Diego.

The whole thing will become very, very dysfunctional. It’s likely to resemble the world in the novels Neuromancer or Snow Crash, both of which I highly recommend, incidentally. If there’s any way to throw sand into the system’s gears, I would certainly do so.

Of course, just saying that will ding my score. But frankly, I don’t give a damn. Which will result in another downgrade…

Justin: So, you think people’s social credit ratings will be based entirely on their digital footprints? Or will these social credit systems incorporate physical surveillance like video cameras?

I ask because some of the so-called offenses that will hurt your credit rating in China include things like jaywalking. That’s a petty offense. People do this every day, and I imagine these “crimes” are recorded or archived.

So, I wonder if the Chinese plan to incorporate video surveillance into their system.

Doug: It wouldn’t surprise me. There are already cameras everywhere. And many of them apparently already have facial recognition systems with artificial intelligence (AI). They’re highly sophisticated, and can recognize your face and correlate that with your height and walk, which is unique to each person. They can already do these things. And, as we know, AI is advancing at the rate of Moore’s Law.

Soon, these cameras will be everywhere. When that time comes, the government will pretty much know where you are at all times.

So, you can pretty much let your imagination run wild. In fact, I just read about a man in the United Kingdom who got 20 hours of community service for loudly singing an alleged anti-lesbian song in his own home. The people living below him are lesbians.

That seems like the type of thing that would ding your social credit rating. 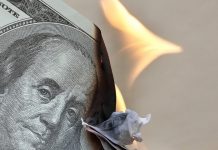 What’s the Fed Willing to Sacrifice for a Strong Stock Market?