Is the US economy collapsing into the Epocalypse that I predicted would start to show up as large cracks in the economy last summer? The initial damage that I forecast for last summer was in auto sales, housing sales, and the ruin of retail stores and shopping malls along with their satellite restaurants. These initial breakups, I said, would likely also include a stock market crash a little later … likely by January, 2018, or, in the very least, by this summer.

Those things that I set out for last summer did begin to materialize on schedule, but autos and homes got a big temporary lift from the hurricanes and wild fires that destroyed hundreds of thousands of each. I also predicted that reprieve as soon as those events took place. I didn’t wait until after the fact as a justification of the change but stated it before any statistics showed the reprieve was happening and before other economists came out saying such a reprieve would happen (though many economists now concur). You can find all of that in last year’s articles. I also indicated then how long that temporary reprieve would last — to the start of this year for autos and probably until late summer for housing. (I’ll come back to those in my next article.)

Fed up with the Fed

In this article, I want to lay out the tidal change in stocks and bonds that is happening exactly on the slower schedule for decline that I gave for those markets. That, by the way, was a prediction that should have been easy for any economist. It is to the utter shame of nearly all economists and stock and bond gurus that the shift that is now appearing everywhere was not in their forecasts. It is even more to their shame that so many still cannot see what is happening even as it now takes place right under them; but we’ve seen that specialized ineptitude in the past.

In fact, I started writing this blog because economists seem uniquely to be the solitary class of experts who understand the basics of their own field far less than anyone in any other field. To their monumental discredit, almost none of them saw the Great Recession coming. The worst of them all, however, was one who was highly regarded for his analysis of how the Great Recession’s predecessor, the Great Depression, came into being. This is the same man who, as the worst possible answer to the Great Recession, gave us the Great Repression of interest rates all over the globe, believing he could engineer our way out of a debt-caused problem by enticing everyone to a lot more debt.

It was just as easy during those recent years when all economists must have been on hallucinogens as it is now to recognize that a global crash of enormous magnitude was imminent. Nevertheless, two heads of our nation’s central bankers (one who was CEO of the central bank at that time and one who was about to be) stood knee-deep in the Great Recession and pronounced there was no recession anywhere in sight! That was one of the most bombastic claims ever made — given that it turned out to be one of the greatest recessions in US history — one that plagues us still. The same highly praised, overpaid economists who missed that one while standing in it are missing the present one, even as they create it.

Because of his astute understanding of the formation of great economic abysses, the younger one of the two (Ben Burn-the-banky) was handed the reins of our economic system by the other (Alan Greenspent). Why national government would readily approve handing the reins over to a blind man after the hindsight of his total blindness was a clear fact is something that would be utterly beyond me to comprehend, except that I readily affirm that is how government and crony systems routinely operate.

So, do not be surprised that none of our nation’s central banksters see what the fallout of their present actions, and do not take their misguided statements about the strength of the economy with any more seriousness than their august opinions deserved in 2008. You have to look to those with no economic training, such as myself (or just look to your own gut-level understanding) to find people who can see the obvious in the face of a multitude of professionals who deny the obvious and odious facts that already engulf us.

To that end, I am going to start this short series about the death throes of the Fed’s recovery by looking at the sea-change in stocks and bonds simply because this was the most self-evident pair of events I predicted, which many still argue with even as they are now standing ankle-deep in the problem’s formation. Most of all, I present it first because it is the area of economic destruction that is directly related to the Fed’s earlier interference in the economy and its new unwind from said interference.

First, let’s look at the stock market. Here is where the stock market was going when I made my prediction last spring as well as where it went as soon as January, 2018, came and where it is headed still: 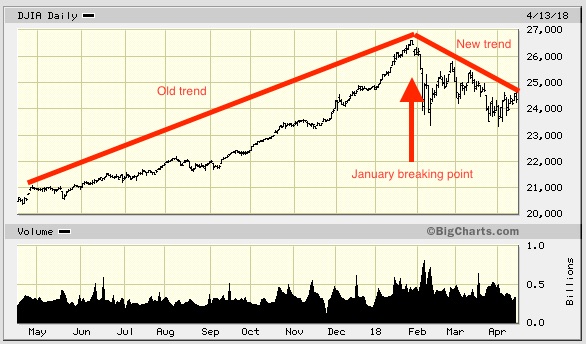 Pretty clear to see a complete change here in the market’s dynamics and its direction. which exactly matches what I predicted on this blog … even to what I gave as the mostly likely date for the change’s beginning. The stock market rally broke its long-term trend at the end of January. This timed out precisely with the Federal Reserve’s increase in quantitative tightening, which is what I said would break the market when January came in the first place. (The Fed did its January tightening in the final week of the month where the trend reverses almost symmetrically to the hyped enthusiasm of the year before.)

I expected, then, that that end of the market’s glory days would not be recognized (or, at least, admitted) by many until this coming summer by which time the Fed’s unwind will begin happening at a furious pace, so that market troubles will be worse than they are now and the trend long enough that no one will be left to deny the change. So, I’ve said all along to anticipate a major drop in January with worse to come by summer. (That doesn’t mean the new down-trend will be a clean line. I have said to expect some reprieve — even in the trend — as that is how major crashes have played out in the past. Remember, for example, that April is typically a good month for stocks, whereas late May through October … not so much.)

The stock-market plunge that ran from the end of January into February included two of the largest point falls in the Dow’s long history, no insignificant event. In fact, it was one of the most rapid corrections from a record high in Dow history. More to its significance — now that we have a little time frame for assessing the damage — is that the market clearly has not recovered — evidence that this was a major market shift point; and there is certainly more of that to come because the amount of tightening is set to increase by another 50% at the end of this month, which I expect will increase the market’s volatility once again, exerting even more downward pressure.